The exhortation throughout Shirley’s poems is to get the soul imbued by inspiration and a rich mind with new ideas, there by filling one’s heart with joy blessed by the God himself.

Shirley Mandel Satterfield’s “The Assorted Christian” is a collection of 33 poems penned by her.  Acknowledging reluctantly that she is terminally human, as she struggles daily with the sins of the flesh and 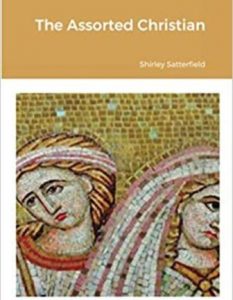 the sins of the spirit, the lines in the poems of Shirley are poignant glimpses of one’s own of imperfections as against the rest of the human race. Being a devout Christian with the faith defining her own life, Shirley says that “we Christians are in a war with our own imperfections along with the rest of the human race, and I know that my faith often wavers and often I wonder if I am really going to heaven or not. However, in the midst of this vicious struggle between the good and evil within me, I as a person of faith, must still put my hope in God to grow into the virtuous and strong person that God knows that I was meant to be.”

Shirley exhorts us to strive to increase the level of awareness and ability to achieve the mastery of one’s life, as she begins the first poem “The Love Ache”. The poet is enthralled by the glory of the ocean as it rolls in as a gift. She compares the mighty ocean with the Milky Way and the flaming Sun, but settles herself with lesser light that guides her feet at night as she is besieged by the intense love of God forever.

Also Read : The Shadowy World of the Poor: Memories of My Friends at the Rescue Mission

Despite her love of nature’s varied forms—both living and non-living—which soothe the body, the mind and the soul, Shirley writes that they reflect and inspire perfection, and she silently retorts that she prefers her life with no extraneous frills. She further adds that “to much polish only kills the soul with the empty hole”.

In another poem, “The Womb”, Shirley says “My heart is being shaped by the many colors of the world”. She contends that she evolved herself with a generous heart blessed by the earth and how loss and poverty made her compassionate towards friends.

In the poem “On Wings of Words”, Shirley exhorts us to send our thoughts to heal a soul, and not to hurt the heart of another. She wants us to send out songbirds to feed souls so that there is joy abound binding troubled souls.

As our journey is a zigzag path that doesn’t depend on our regular math, Shirley says life is anything but fair depending upon the choices we make, which weigh us down with care.

In “To Burst Free” Shirley desperately wants herself “to burst free from these fragile boundaries of self, to wing deep into the rays of the heavenly sun”. She displays her mental agony as she is tired of the darkness around, and how her heart pangs out to live under the light of God.

“A Prayer on Sunday for General Cleansing” conveys the author’s unquenched thirst and desperateness to be one with harmony with self, others and God. In line with that she requests God to cleanse sins and anger from her. In the subsequent sequel she surrenders herself to Him fully certain that He knows where she would end up. She also thanks Him for the little glimmers of success she had in her life. Deeply grounded in God’s faith, she says she can do nothing, but succeed. She is peace with herself due to God, and she is least greedy and selfish, and she only yearns the things in life which the divine deems appropriate for her to have. Moreover, she recognises that peace is when God lets the spirit flow so that her soul can grow, and peace and prayer always intercept with Him.

Shirley in her “Forgiveness Wings” exhorts mankind to look at the brighter future at hand where mankind forgives a man. She says “forgiveness wings give flight to the heart and give a brand new body a brand new start”, which she says are “the freedom wings”.

The exhortation throughout Shirley’s poems is to get the soul imbued by inspiration and a rich mind with new ideas, there by filling one’s heart with joy blessed by the God himself.