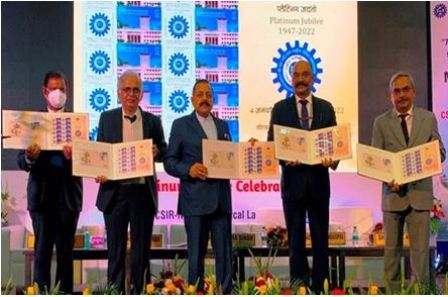 CSIR-NPL is the custodian of national measurement standards through an act of Parliament. It is one of the oldest and premier institutions of CSIR. The foundation stone of the laboratory was laid on the 4thJanuary1947, shortly before India became independent.

Speaking on the occasion, Dr Jitendra Singh noted that CSIR-NPL is a monumental illustration of India’s incredible scientific journey in the last 75 years and said that the platinum Jubilee celebration was an occasion to plan for the next 25 years with a conscious realisation that science and technology are going to be the main currency for the inclusive growth of India.

The Minister said that PM Modi has a special aptitude for science-driven developments, which has enabled all the scientific programmes to concentrate on applications which are relevant to bring ‘ease of living’ to the common man.

He pointed out that all the six science & technology departments including space and atomic energy and the autonomous institutes have contributed hugely to the fight against COVID-19 through the research for the development of vaccines, genome sequencing and other protocols.

He recalled that the first DNA vaccine trial was done by the Department of Biotechnology, ISRO provided liquid Oxygen continuously on a large scale to several State governments from their manufacturing facilities or from the existing stock, and the Department of Atomic Energy developed reusable PPE kits and N-99 masks using HEPA filter technology.

Referring to the LED Photometry Laboratory inaugurated on the occasion, Dr Jitendra Singh said, this national-level facility would contribute to making India ‘Atma-Nirbhar’ in the apex level calibration and testing of LED lighting products. These will not only save the foreign exchange spent on availing testing and calibration services from abroad but also significantly reduce turn-around time.

The Minister also released Bharatiya Nirdeshak Dravya (BNDs) to support the testing and calibration laboratories for quality assurance at par with the international standards for high purity gold, silver, and other elements. Further, he launched a calibration facility for Infusion Pump Analyzers used for testing the infusion pumps, and certification processes for low-volume PM2.5 samplers to fight pollution and for Ambient Ozone Analysers.