The coastal clean-up drive was carried out at 75 beaches across the country with 75 volunteers for every kilometre of the coastline. 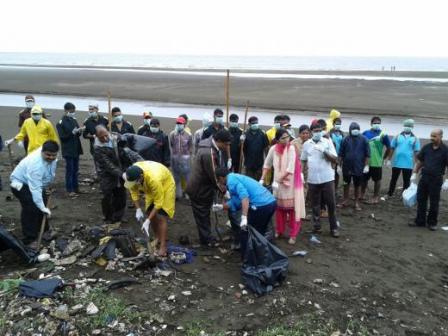 country’s 7,500 km long coastline will end with simultaneous cleaning campaigns on different beaches across the country on Saturday, September 17.

The “International Coastal Clean-Up Day” is celebrated globally on the third Saturday of September every year. This year it falls on September 17. The Government of India ran the massive 75-day long cleanliness campaign “SwachhSagar, SurakshitSagar” (Clean Coast, Safe Sea) along India’s entire coastline in collaboration with voluntary organizations, and the local society. Among other things, efforts were undertaken to collect scientific data and information on marine litter in various matrices, such as coastal waters, sediments, biota, and beaches.

The programme coincided with the celebrations of Azadi Ka Amrit Mahotsav to mark the 75th year of the country’s independence; The coastal clean-up drive was carried out at 75 beaches across the country with 75 volunteers for every kilometre of the coastline. The campaign had three strategic underlying goals that target transformation and environmental conservation through behaviour change: consume responsibly, segregate waste at home, and dispose of waste responsibly.

Dr M. Ravichandran, Secretary, Ministry of Earth Sciences (MoES), said that this campaign will play a unique role in achieving a 30 per cent reduction in plastic waste thrown into the ocean by 2030. He informed me that the plastic waste collected during the campaign would be segregated for recycling. Indian Oil Corporation has taken the initiative to recycle plastic waste.

Briefing the media on the massive beach cleaning exercise to be undertaken on the 17th of September, Dr Jitendra Singh said the campaign received a huge boost as several Governors, Chief Ministers, film and sports personalities, civil society groups, and the commoner have pledged full support to the longest and most extensive beach cleaning campaign.

Besides, the Chief Minister of Gujarat, Mr.Bhupendrabhai Patel will be at Porbandar (Madhavpur), and the Union Minister of Fisheries, Animal Husbandry and Dairying, Mr. Purshottam Khodabhai Rupala at Jafrabad, Amreli. Goa Chief Minister Mr. Pramod Sawant and Governor of Goa Mr. P. S. Sreedharan Pillai will participate in the event on South and North Goa beaches. Similarly, Kerala Governor Mr. Arif Mohammad Khan will be at Kochi, and Minister of State External Affairs Mr. V. Muraleedharan at Kovalam beach, Thiruvananthapuram.

The Governor of Karnataka Mr. Thawar Chand Gehlot will join the campaign at Panambur beach in Mangalore, the Governor of Telangana, Dr. Tamilisai Soundararajan at Puducherry beach, L. Murugan, MoS, Information, and Broadcasting at Chennai, and Governor of Mizoram Dr. K. Hari Babu at Vizag beach.