COVID-19 and Lives at Sea

The overworked crew members are waiting to go back to their homes, but unfortunately, they are not even allowed to step off the vessel. COVID-19 impacted in the maritime sector and it has disrupted shipping operations and affected the work of nearly 2 million seafarers worldwide.

The shipping industry regulates 90 per cent of the international trade running across 150 nations. It is operated by a million seafarers who travel miles every day to ensure proper supply of food, medicine and other essential items to us. Its service is indispensable for global trade and has become even more important today when the system of commercial flights is stalled due the imposition of lockdown. 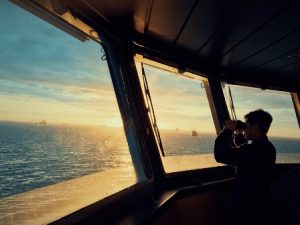 “The employees are working for seven days a week and much beyond their working hours only to facilitate the supply chain during the pandemic and even risking their lives for the same. But the contracts are being disproportionately extended, putting a greater work demand on the 1.5 lakh seafarers who are presently waiting for crew change” said Corrine Vargha, Director, Department of International Labour Standards, International Labour Organisation (ILO). She was speaking at the webinar on 5 June 2020 organised by ILO to discuss the impact of COVID-19 on the maritime workers. The webinar was moderated by Brandt Wagner, Head of the Transport and Maritime, Unit, Sectoral Policies Department, ILO.

Corrine shared that the overworked crew members are waiting to go back to their homes, but unfortunately they are not even allowed to step off the vessel owing to the strict COVID measures causing collateral damage to many unnoticed lives. The welfare and mental well-being of these workers or “prisoners of the sea” are more or less invisible to the administration. Problems like visiting a doctor or seeking medical help due to increased levels of frustration and anxiety, often demoralises others on the ship too.

Mark Dickinson, Nautilus General Secretary, pointed out that states are putting force majeure as an excuse to overlook the demand of crew change and that of repatriation. The present crisis has highlighted the structural flaw in the shipping industry, including unpreparedness of countries and the cost is being paid by the seafarers who are being exploited and denied basic rights and yet they are tirelessly working for the welfare of the global community. The open-ended contracts should come to an end now and states need to ensure that the Maritime Labour Convention (MLC) is being effectively implemented along with the new protocol. Dickinson said “There is a very fine, thin line difference between the denial of worker’s rights and forced labour”, but it is very much there and it is an important one.

Beatriz Vacotto, Head, Maritime Unit, Department of International Labour Standards, ILO, emphasised on the need to recognise the seafarers as essential or “key workers”, maintaining the smooth flow of international trade and working as the life support system of the economic order.

She also talked about fixing a definite maximum period of service on board to cease the current practices of overburdening the maritime workers. Vacotto further added that during this period seafarers should be allowed to take shore leaves as well as paid sick leaves in case of infection or quarantine.

Julie Carlton, Chairperson, Tripartite Committee of the MLC, 2006, shared the UK experience. Britain ratified the MLC in August 2013 and it also adopted the Red Ensign Group Policy to promote welfare practices for the benefit of seafarers. She affirmed that the UK is fully committed to the welfare of seafarers of all nationalities and will continue to adhere to international obligations. Along with medical support, Britain is also providing access to communication to help the maritime workers to contact home. Carlton also addressed some MLC related issues like expiration of seafarer certificate which should be extended to at least three months after the date of expiry. She introduced some collaborative measures to provide quick relief to the maritime workers including cross government meetings involving the department of transport, foreign and commonwealth office, public health authorities and infection control centres and port authorities along with an arrangement for regular dialogue with industry and the unions.

Sarah Cerche, Spokesperson of the Shipowner Group at the ILO, comprehensively highlighted the demands of the shipowners by illustrating the barriers after sharing their initial reaction to the pandemic and the ensuing restrictions. The major barriers include the introduction of border constraints, which reduced the chances of travel, consequently affecting the crew change routine; the ambiguity surrounding the unclear allocation of duties made enforcement of policies a challenging task during the outbreak; hindrance in the operation of commercial flights halted the movement of the returning seafarers, making it difficult for them to reach home. Similarly, lack of consistent protocol for entering into the countries also stands as a stumbling block for the mariners wishing to travel for or from work. Cerche urged the MLC members to bring in laws and regulations to set out clear entitlements of repatriation to seafarers by ship owners. Each member should facilitate this process of repatriation of seafarers who traverse at its ports or pass through its territorial or internal waters.

Ninglan Wang, Unit Head, Border Health Risk Dissemination Unit, Health Emergencies Programme, WHO, threw light on Article 2 of the International Health Regulations (2005), which calls for the states “to prevent, protect against, control and respond to an international spread of diseases, while avoiding unnecessary interference with international traffic and trade”. She further discussed risk analysis at three levels – on board ships, during shore leaves and on ship port operations – along with some preventive measures like hand hygiene, respiratory etiquette, symptom screening, temperature screening, disinfecting the vessel and contact tracing.

Dr Suzanne Stannard, representing the International Maritime Health Association, discussed the importance of maintaining basic levels of medical support system to help the seafarers. Healthcare facilities vary in every state but opposite to this there is uniformity in the augmentation of pressure on the mariners but not all the required services are available to them. While ports are working on increasing the accessibility to healthcare, the quality of the service should also be checked. States need to ensure the availability of video or phone consultations and the required drugs on the vessel. Before changing the crew members, testing and isolation of the pre boarding seafarers should be ensured.

The International Maritime Organisation (IMO) has laid down a comprehensive 12 step plan to bring crew change into action without compromising with the associated risks by encompassing the latest recommendations of WHO and other related expert organisations. Many European countries have already recognised the importance of the enforcement of the aforesaid IMO plan and positive developments are witnessed in Germany, France and Britain. However, there are still many nations who have not yet moved towards this initiative and even if they make a decision on this front, they would not be able to implement in isolation and without availing help from other nations. Thus, a conjoint international plan of action is needed to provide relief to the mariners. The continued delay throws light on the fact that the government gives recognition to the role played by the seafarers but it fails to recognise the unbalanced sacrifices they make or rather they are compelled to make.

The Port Authority Roundtable (PAR) Members of various states located in Africa, America, Asia, Europe, Middle East and Oceania shared a collaborative commitment declaring that they would work closely to put into force the best measure and practices with respect to the circumstances prevailing in the state. However, the point regarding crew change was found nowhere in this declaration, giving the state the autonomy to decide whether the situation in their country is serious enough to allow the overworked mariners to return home or not.

This unchallenged decision making power should be replaced with a system where the IMO and ILO are empowered to take shape the decision pertaining to the most basic issues at least including medical help for seafarers, crew change and repatriation. 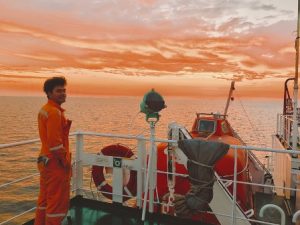 Employment of Women in the Shipping Industry

According to the World Economic Forum (WEF) women account for only 2 per cent of the total seafarer population, the inconsiderate working conditions which have only worsened in the present times can push back women from taking up this. Lack of infrastructure to support the female gender on the vessel, low acceptance rates influenced by stereotypes and the absence of an effective redressal system to fight harassment can seriously impair the sex ratio in the shipping industry. The inaction of the government related to the routine practice of crew change will further discourage women from adopting the career option of mariner because the associated risks far outweigh the advantages offered by maritime jobs.

System of Remuneration and Minimum Wages

The Maritime Labour Convention 2006, Guideline B2.2.3, clauses 1 and 2 on minimum wages lays down that the minimum remuneration of the worker is to be decided by taking into consideration two potential factors, which are the normal hours of work of the seafarer and the change in the cost of living of the seafarer.

During the time of the pandemic and also in the post COVID world, the demand on the maritime industry will ceaselessly increase because of the present halt in the operations of the manufacturing houses across the world. In the near future, production will gain pace again and this time the demand of shipment of goods will be more than before because the states have to make up for the depleting resources stored in the emergency supply units and also maintain a healthy supply in the domestic markets. The upcoming tasks call for greater human resource and increased number of working hours, and therefore the minimum wages of the workers should be ensured to keep up with the augmentation in the work.

Similarly, during the pandemic the prices of basic goods have escalated to new levels, which may not be compatible with the existing wages given to the seafarers. Consequently, changed times calls for the adoption of new synchronised measures.

The writer, a legal policy researcher, is an undergraduate Law student at the West Bengal National University of Juridical Sciences. She can be reached on twitter
@KashmitaMewal

Birds Look Agape at the Heat, But They are Airconditioning