The development of the new safe dye that team has named “GreenR™” will help researchers in the field of Lifesciences. 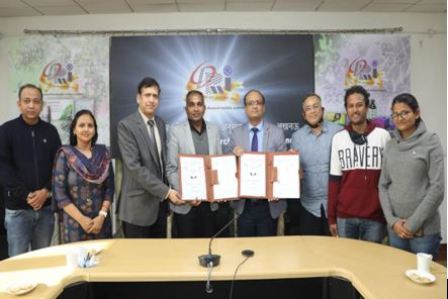 technology of Nucleic Acid Staining Dye GreenR™ to GenetoProtein Pvt. Ltd., a start-up company registered in Uttar Pradesh in the year 2020. This startup is involved in developing an array of enzymes, kits and biochemicals used in Lifesciences research, particularly molecular biology. The dye GreenR™ has have been developed by CDRI Senior Principal Scientist Dr Atul Goel in a joint collaborative project with an industry partner Biotech Desk Pvt. Ltd., Hyderabad.

The director CSIR-CDRI Dr Srinivasa Reddy said that “the nucleic acid staining dye segment seems to be dominated by costly imported products of multinational companies and this make-in-India product is cost-effective and will reduce our dependency on foreign supplies. He further mentioned that CSIR-CDRI, Lucknow is committed to nurturing the development of pharma cluster and startup culture in Uttar Pradesh, and this is another step in this direction.”

While talking about the technology, Dr Atul Goel informed that the product GreenR™ may be used to stint DNA and RNA for research and diagnostics to detect and quantify them. It binds to nucleic acids like genomic DNA, PCR products, plasmids and RNA under blue light or UV exposure.

Dr Shradha Goenka, Director of Geneto Protein Pvt. Ltd. commented that the efficacy and toxicity of GreenR™ have been tested, and various applications for this dye are now being studied. We have been dependent upon stains like Ethidium bromide, which intercalates between the DNA strands and is a known mutagen to bacteria, animals, and humans. Hence its usage is risky for the user and its disposal needs special treatment. To overcome these toxicity issues, some foreign companies have invented safe DNA dyes such as Sybr Safe™ by ThermoFisher. However, these dyes have substantial costs as they are expensive to import.

The development of the new safe dye that the team has named “GreenR™” will help researchers in the field of Lifesciences and DNA-based diagnostics to bring down their cost substantially. This would enhance the product portfolio of her company and help Indian research go one step closer to Aatmanirbhar Bharat. The product also has applications in molecular diagnostics and would support in PCR-based testing of diseases. (India Science Wire)