Equipping and training paramilitary forces engaged in maintaining the law and order situation in the country is important.  With a view to elevate modern technical support to the forces, Council of Scientific and Industrial Research- Central Mechanical Engineering Research Institute (CSIR-CMERI), Durgapur,  has developed and demonstrated itsthree advanced and indigenously designed variants; 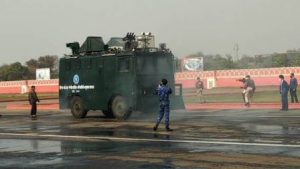 The Heavy category of these MCV prototypes has a 7.5-ton payload capacity. While the Medium category is of 2.5-ton payload capacity, the Compact one is a tractor-based vehicle for easy maneuvering. The key requirement and followed specifications have been evolved, formulated with the involvement of various designated stakeholders.

The other capabilities are cabin pressurization system, retractable multi-barrel tear gas launcher with appropriate electronic vision systems, wide-angle surveillance, multi-channel video transmission system, GPS tracker and, GPS navigator. The design architecture allows easy and fast customization in downstream products. The production versions of the MCVs can be tailor-made as per the actual requirements and functional priorities of the users so that their effectiveness in mob/riot control scenarios can be augmented. (India Science Wire)