CSIR to Write to EC about Its Anti-COVID Disinfection Technology 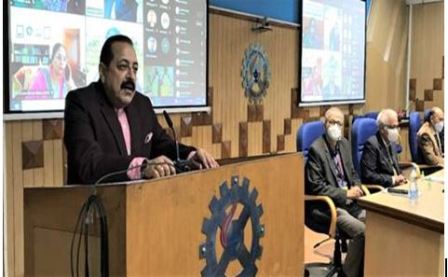 India suggesting that a disinfection technology developed by the Council’s Central Scientific Instruments Organisation (CSIR-CSIO) for mitigation of airborne transmission of SARS-COV-2 be recommended for use during indoor meetings organised by political parties in the run-up to the ensuing Assembly polls in five States.

The Commission has recently banned the holding of rallies and roadshows for a specified period and has instead allowed indoor meetings with a maximum capacity of 300 people or 50 percent capacity of the hall or auditorium while adhering to the model code of conduct and COVID protocols during electioneering.

It deactivates viruses, bacteria, fungus, and other bioaerosols with appropriate dosages using 254nm UV light. It can be used in auditoriums, large conference rooms, classrooms, malls, and other such places and provide a safer environment for indoor activities in the current pandemic.

He recalled that the technology was installed in the Central Hall, Lok Sabha Chamber and two committee rooms in July last year for the Monsoon session of Parliament and said he will write to the Secretary-General of Rajya Sabha for installation of the technology for the upcoming Budget Session also.

Speaking at a function, where he released a set of guidelines prepared by CSIR for disinfection technologies for mitigation of SARS-CoV-2 transmission, he urged that even after installation of this disinfection technology, it was necessary that everyone strictly adhered to COVID appropriate behaviour including the use of face mask, and maintenance of social distancing.

Secretary, Ministry of Housing and Urban Affairs (MoHUA) Shri Manoj Joshi said that the Central Public Works Department (CPWD) will work with CSIR for wider dissemination and adoption of the disinfection system in Government and private buildings.

A.K Malhotra, Executive Director, Railway Board informed that the disinfection Technology has been successfully tested for one month in rail coaches from Bandra to Chandigarh covering a distance of 1,000 kilometres. The Indian Railway’s Research Designs and Standards Organisation at Lucknow has recommended the use of this technology in all rail coaches in a phased manner.

Shri Amit Varadan, Joint Secretary, Ministry of Road Transport & Highways said that the technology was successfully used in AC Buses of Uttar Pradesh State Road Transport Corporation (UPSRTC) and informed that his Ministry was interested in promoting its use for all passenger transport vehicles.(India Science Wire)