While the caste lynching increases in its toll, this Dalit rap artiste fights the caste prejudice and shuts the brahamanical caste structure through his art.

It’s been a long time in the market of slaves; you tell me I am free.

In the flock of humans, why are there high and lows;

In the flock of humans, why are there high and lows.

You have the answers, but you do nothing about it,

because you are the culprit.

Worth of my existence is told to me by your abuses.

Your midnight freedom Burns our slums and bastis;

Your midnight freedom burns our slums and bastis.

These lines are by Sumeet Samoos, a 24-year-old rap artiste from Koraput, Odisha who has lived and survived the caste discrimination in the country. Through his music, he tries to bring forward the voices of the masses which have always been unheard of in the caste-based society.  The form he chose for “emancipation from a Brahminical society” is ‘Hip Hop’, a form also associated with liberation of the Black community from racial discrimination in the Western world.

“Sumeet, a former student of Jawaharlal Nehru University, Delhi and a social activist does not hide the caste based targeting in the University spaces.Through his songs/poems, he challenges the casteism prevailing in the roots of all institutions in the nation.”

Despite numerous struggles which he had to face on account of being from the Dalit community, today, he is emerging as a leading voice and rap artiste in the nation. His first album, ‘Ladai Seekle’, is soon releasing where he reminds us the teachings of Baba Saheb Ambedkar, Malcom X, Periyar and Savitri Bai Phule. His work emerges as a tool to directly connect with the younger generation as well as understand and act against the stigma and harassment associated in the public as well as private lives of varied communities and caste hierarchies. A new perspective is brought into action using the popular culture of rap music in contemporary times.

Hip Hop music or rhythmic speech originated in the black populated ghettos of United States of America and was disassociated from art and music of the mainstream white supremacist culture of the Western world. In the wake of technological advances, new mediums opened up roads for black music to come into acceptance and limelight. 1979 became the year when Hip Hop music was officially recorded, voicing the fights and efforts of the black community against racism. The struggle of the form itself and also works of black contemporary rappers like Kendrick Lamar, Tupac and Joyner Lucas inspire Samos to create art works which could lead to a transformative Indian society, free of caste oppression, based on equality and rejecting caste privileges. 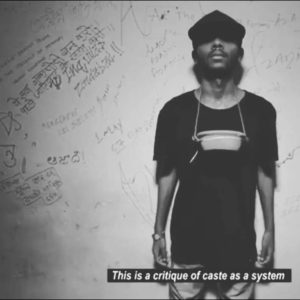 Samos’ works stands out not merely because it voices the underprivileged, but also because unlike the popular rap culture of Bollywood and Punjabi rap, it is not based on sexism. In the popular rap catered to the majority population of the urban youth, the feminine body is presented as a mere sex object not only visually but also in lyrics. It would not be wrong to say that leading rap artistes of the Hindi Film Industry have degraded the form and feminine identity to sheer slander.

Popular Indian rap artistes are not the only ones responsible for degradation of form as they have followed the footsteps of white pop culture where the main focus remains to cater to the market. Unlike the liability of catering to market, the thought process behind Samos’ music remains distinct and unique. Samos tells Delhi Post, “There are three things that inspire me. First is the long history of anti-caste emancipators, their life stories and their vision for an egalitarian society. Second, is the powerful conviction, spirit and hope among the marginalised castes to fight against a deeply unequal system of caste and to live a life of dignity despite all sorts of violence in everyday lives. Third, is my own experience which has taught me to keep going. The songs or poems that I write are a combination of all these three aspects.”

“Earlier this year, Samos was invited to Paris for a performance preceded by discussion for the city-based show ‘Radio Live’ and also performed at Hyderabad Central University at a programme organised for the commemoration of Rohith Vemula, PhD Dalit scholar whose suicide caused a major tremor in the academic world.”

In his latest viral music video called ‘Hard Truth’, he critics the Dalit discourse propagated by upper caste scholars, restricting permeability for Dalit voices who undergo caste supremacy even in urban progressive spaces. The video is titled ‘Hard Truth’ as it aims directly to the so-called Dalit sympathizers who exploit stories and narratives of the unprivileged sections of society. This attitude of the upper caste makes Samos believe in the existing power structure of the society held in the tight grips of Brahmanism.

Politically the artiste is associated with Birsa Ambedkar Phule Student Association (BAPSA) at the Jawaharlal Nehru University. The organisation works for the interest of the Dalit-Bhahujan community in the campus. The organisation struggled against the removal of 100 per cent weightage to Viva voce against the University Grants Commission’s gazette legally as well as by constant protest demonstrations.

According to BAPSA, 100 percent weightage in Viva, restricted the students from the backward backgrounds to seek admissions due to their unpolished speaking skills, which is often the demand by elite professors. In multiple programmes conducted by BAPSA, Sumeet has stood with the organisation, giving immense credit to BAPSA and the people associated with it. According to Samos, “BAPSA has been crucial for me as it has exposed me to diversities, within oppressed communities as well as helped me shape my political articulation. Most importantly it has provided a community of students who have helped in different ways.”

In the coming future, Samos aims to pursue his post doctorate in creative writing where he can further enhance his skills and knowledge. He is a hero for many, and continues to encourage people from the Dalit community to keep up the battle initiated by Mahatma Phule and Baba Saheb Ambedkar. His aim is not merely to connect with the Dalit masses, but also to make the Brahaminical Society accept the ‘Hard truth’.