Shovana believes in expanding the boundaries of kathak through cross-cultural experimentation and innovation in dance styles while rooted to kathak’s ancient Indian tradition.

Dance is my pran, atman and soul. I loved both part of my life – being a dancer and a bureaucrat. I entered the world of dancing when I was barely three-year-old and before my formal education. 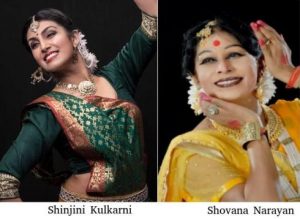 There is a framed lehenga of mine at home which shows how small I was when I was initiated into dancing,” said kathak guru Padma Shri, Shovana Narayan, while connecting with a cross-section of audience across India through a session of Ek Mulakat presented by Shree Cement and organized by Prabha Khaitan Foundation. Shovana was responding to a question from kathak exponent and conversationalist Shinjini Kulkarni of Ehsaas Women – “How did you manage to become a dancer and a bureaucrat?”

Shovana, a woman of stupendous achievements, is a kathak guru, choreographer, former bureaucrat, author and a researcher. Belonging to the guru-shishya parampara (tradition), Shovana believes in expanding the boundaries of kathak through cross-cultural experimentation and innovation in dance styles while rooted to kathak’s ancient Indian tradition.
Prabha Khaitan Foundation showcases India’s rich cultural legacy through various initiatives in India and abroad. Ek Mulakat is an exclusive initiative that allows patrons to rendezvous with legends and stalwarts from various walks of life like Shovana Narayan. It was an honour to host her and we look forward to more such enriching sessions,” said Manisha Jain, Branding & Communication Chief, Prabha Khaitan Foundation.

Shovana Narayan has popularised kathak in international fora by weaving dance and philosophy in her craft. She has successfully choreographed many international collaborative works with kathak and Western classical dance, Flamenco, tap dance, Buddhist chants and so on. In 2003, she choreographed the opening and closing ceremonies of Abilympics. Shovana has won over 37 national and international awards including Padma Shri, Sangeet Natak Akademi award, Japan’s OISCA Award, Bihar Gaurav Award and so on.

Shovana started learning kathak as a child in Calcutta under the tutelage of Sadhana Bose, then she moved on to Bombay and continued under guru Kundanlal ji Sisodia of the Jaipur Gharana and later she moved to Delhi under Pandit Birju Maharaj.

“I will never forget my indebtedness to Guru ji Birju Maharaj who announced my performance prior to his own performance at the Sapru House in Delhi. That was the kind of launching pad I got for my first stage performance,” she said.

Reflecting on her research on kathak, its antiquity, and “kathak villages”, Shovana recounted that about 17 years ago she was in Bodh Gaya for a performance and came to know about villages known as “kathak villages” for the first time from a journalist. “I found two or three such villages and later, along with an IAS colleague of mine, we started on our journey to discover these “kathak villages” and went from village to village, met people and gathered records and official documents and started delving deeper,” she said.

Sharing her findings on how ancient kathak was, Shovana said, “An epigraph from Kameshwar archive in Mithila has been confirmed by epigraphists to date back to the Mauryan period which is BC. The inscription in prakrit and brahmi lipi clearly mentions kathak as devotional dancing and mentions the region around Varanasi.”

“The kathak dance we see today is very different from the kathak community. The sculptures depicting dance forms in today’s standing temples, at best, go back to about a 1000 to 1100 years. So where are the temples and sculptures of the Gupta and Mauryan period which were so rich in architecture and sculptures! We don’t look into the small museums and archives of India which is the haven of information. That is where we have to see and find continuity in the form and stance of the kathak dance,” Shovana  said.

“I believed in myself and have never deviated from kathak, I was true to my kathak tradition just like the Western classical dancers were to their’s. So what did we do? We just found commonality in terms of poems, moods and even movements but the emphasis, the field and flow, as in the approach, tenor and flavour is different. I am careful about using the term fusion which means I lose my identity to merge myself into something. No, I keep my identity, so do they, and it is a beautiful collage of patterns and rhythmic dimensions,” she said

Ek Mulakat series of webinars have connected artistes, achievers, cultural aficionados, thinkers and authors with people across India and other continents.