In absence of a sustained global approach to contain COVID-19 that includes universal access to vaccines, the pandemic will continue to pose the greatest risk to an inclusive and sustainable recovery of the world economy.

Due to the global pandemic, there have been persistent labour market challenges, lingering supply 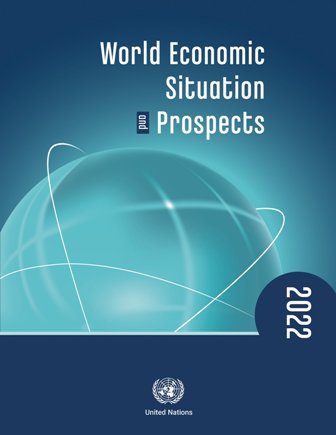 chain challenges and rising inflationary pressures. This has caused governments to make difficult policy choices with the weaking economy. Further, the rise of Omicron and the phasing out of the monetary stimulus could have their own consequences.

According to the United Nations World Economic Situation and Prospects 2022, which was launched last day, the recovery in East and South Asia remains moderately robust. The report was virtually launched in New Delhi by Dr Rajan Ratna, Deputy Head and Senior Economic Affairs Officer, United Nations Economic and Social Commission for Asia and Pacific.

The robust recovery in 2021 – driven by strong consumer spending and some uptake in investment, with trade in goods surpassing pre-pandemic levels — marked the highest growth rate in more than four decades, the Report highlighted. Yet the momentum for growth – especially in China, the United States and the European Union – slowed considerably by the end of 2021, as the effects of monetary and fiscal stimuli began to recede and major supply-chain disruptions emerged. Rising inflationary pressures in many economies are posing additional risks to recovery.

The world gross product will further be influenced by varying vaccination gaps due to unequal access of countries. The report has predicted that after expanding by 5.5 per cent in 2021, the global output is projected to grow by only 4.0 per cent in 2022 and 3.5 per cent in 2023.It says “that many developing countries may not even be able to recover to an output of 2.5 per cent” which was last recorded in 2019. It is predicted that developed countries may be able to fully recover by 2023 relatively to the pre-pandemic conditions. The difference in the recovery rate between developed and developing countries will cause an increase in income inequality across nations.

As a result, global inequality will increase instead of decrease as targeted in the global Sustainable Developmental Goals (SDGs).

Higher levels of inequality within and between countries are emerging as a longer-term scar of the pandemic. In the coming years, a full recovery of GDP per capita will remain elusive for many developing countries. Africa and Latin America and the Caribbean are projected to see gaps of 5.5 and 4.2 percentage points, respectively, compared to pre-pandemic projections. The impact of this can already be seen in the increase of extreme poverty, long lasting slack in labour markets and increasing food prices. It was recorded that in 2021, 889 million people lived in extreme poverty (USD1.90 per day). High commodity prices provided respite for some countries. However, countries depending on tourism as their main source of income are yet to recover fully with the unpredictability of the pandemic.

The pandemic brought many new challenges to the world and our policy makers were quick to rise to this challenge. Central banks quickly expanded conventional monetary policy in early 2020. Many introduced Asset Purchase Programme (APP) for the first time due to large capital outflows and rising government financing costs, resulting in deteriorating financial conditions. A total of 27 Central Banks—10 in Africa, 9 in Asia and 8 in Latin America and the Caribbean implemented APPs. This was mainly done to reduce the market dysfunctionality and was considered a quick and bold action, which recovered market confidence and financial stability. The APPs, hence, have proven to be an effective step during the pandemic. It stabilised the markets by providing ‘liquidity, easing financial conditions and reduced uncertainty. However, even through such drastic changes in the market, the Reserve Bank of India (RBI) in the second quarter of 2021 was the only major developing country central bank that continued to make significant asset purchases, whereas the Central banks of other developing countries focused mostly on purchasing public securities denominated in local currencies. Many also purchased private securities, bank bonds and even equities. The APPs also reduced bond yields without weakening currencies in developing countries.

Such monetary policies have allowed East and South Asia to recover from the worst of the pandemic. In East Asia strong policy stimulus and external demand, supported the growth of gross product in 2021 from 1.0 per cent in 2020to 6.7 per cent. In South Asia the recovery continues to gain momentum between the rising infection, increasing remittance inflow and supportive policy making. South Asia’s growth of gross product increased to 6.7 per cent in 2021 from -4.7 per cent in 2020. If we are to look at India’s recovery prospects specifically, the rapid vaccination progress, supportive monetary and fiscal policies, strong export growth, relaxation of lockdowns and public investments create a solid path to economic recovery. However, we must keep in mind that high oil prices and coal shortages could adversely impact economic activity again in the near future. Furthermore, the potential risk of  inflation due to hike in oil prices leading to a potential decrease in domestic consumption, could affect the recovery of all sub regional countries. For other South Asian countries such as Sri Lanka, Nepal, Maldives and Bhutan it may be more challenging as incomes of most of these countries largely depend on their tourism and hospitality sector.

There can be a series of downside risks in the recovery process. New waves of COVID-19 and the emergence of new variants can cause prolonged supply chain disruptions. Global financial conditions could tighten creating an increase in capital outflows and increasing debt of countries. Data have shown that the debts of most countries have increased in the period during 2015 to 2021. It has been estimated that India’s debt has increased by approximately 20 per cent between 2015 and 2021.

The impact of the pandemic has been drastic over the last two years both economically and socially. The unpredictably of COVID addresses the challenges posed by the pandemic by changing fiscal and monetary policies with careful sequencing and collaboration to avoid disorderly adjustments. New and effective labour marketing policies are imperative. This will have to be tied with equal access to vaccines, decrease in trade tensions, tackling debt challenges and reduce carbon emissions. Further, this also shows us the urgency of accelerating the implementation of SDGs, especially in South Asian countries and the goals concerned with poverty reduction. However, goals such as sustainability and climate action require a lot more progress. Without a coordinated and sustained global approach to contain COVID-19 that includes universal access to vaccines, the pandemic will continue to pose the greatest risk to an inclusive and sustainable recovery of the world economy.

The writer is a student of Law at the Jindal Global Law School (JGLS), India. She can be reached on twitter @Rukmini_15