Commemorating the International Day of the Girl today, Save the Children brings forward an analysis of how secondary school education can help curb the practice of child marriages. 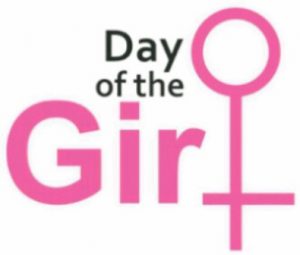 I f all girls around the world finished secondary school, 50 million child marriages could be prevented by 2030, reveals a new report.

Considering that child marriage is one of the leading reasons for school drop-out in low-income countries, the role of education is critical in reducing child marriage rates as per the International NGO Save the Children’s new briefing, ‘Working Together to End Child Marriage’.

While an estimated 25 million child marriages have been prevented over the past decade, no developing country is currently on track to meet the UN goal of wiping out the practice by 2030, states the briefing.

“Analysed from Demographic Health Surveys (DHS) and Multiple Indicator Cluster Surveys (MICS) for 67 countries, the data determines the likelihood of a girl being married and in school at the same time.” 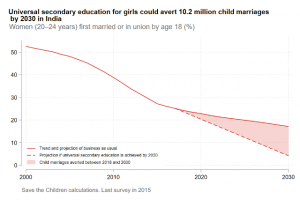 Bidisha Pillai, CEO, Save the Children in India, said “Out of every 28 child marriages that occur per minute in the world, more than two take place in India. Gender disparity in child marriage is clear when we look at the absolute share of males and females in the population married below 18 years. Out of these 100 million child marriages, 85 million are girls, constituting 83 per cent of the total child marriages.”

The relationship between child marriage and education is two-way. At the same time, the briefing points out that out-of-school girls are exposed to “increased risk factors” for child marriage. With many living in insecure environments, parents often feel that marrying their daughters off will protect them from harm or the stigma associated with a relationship or a child born out of wedlock.

A recent Save the Children study in West Africa’s Niger – which has the highest rates of child marriage in the world – also found that girls who do not attend school are more at risk of child marriage, early pregnancy, and being malnourished.

Based on current trends, the briefing notes that universal upper secondary school completion will not be achieved before 2084, which is more than 50 years off target.

The briefing also states that last year, 21 per cent of women between 20 and 24 years globally were married or in a union before the age of 18.

“While education alone won’t end child marriage, it is a critical piece of the puzzle in ending the abusive practice. When a girl gets married, it doesn’t just violate her rights once—the consequences last a lifetime,” said Pillai.

Previous research by Save the Children and the World Bank has shown that while legal and policy reform is also important in ending child marriage and keeping girls in school, so is enforcing these laws and changing attitudes at the community level.

“In addition, the briefing calls on world leaders to prioritise girls’ access to health and protection programmes to help end child marriage.”

These plans must be fairly financed and must incorporate a strong focus on education, indicates the briefing. “Progress is being made but not fast enough. On International Day of the Girl, we urge the government to prioritise tackling child marriage, one of the major barriers to the empowerment and education of so many girls,” said Pillai.