Despite India taking pride in being the pharmacy of the world, the dependency on drug donation is resulting in the denial of efficacious treatment and the right to health guaranteed under the Constitution. Government must initiate steps for domestic generic production of the critical life-saving drugs either through a government license or a Compulsory License under the Patents Act. 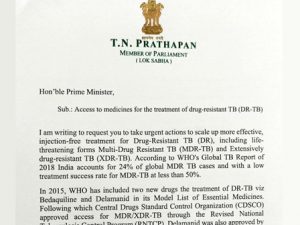 ensure access to medicines for the treatment of drug-resistant TB. He has cited the WHO’s Global TB Report of 2018, which stated that India accounts for 24 per cent of global multi-drug resistant TB cases and with a low treatment success rate. In his letter, Prathapan has requested the prime minister to scale up more effective, injection-free treatment for drug-resistant TB.

Prathapan, Lok Sabha member from Kerala, has pointed out that the Revised National Tuberculosis Control Program (RNTCP) has been updating the guidelines on Programmatic Management of Drug-Resistant TB on the basis of WHO recommendations, and included the two new drugs named Bedaquiline and Delamanid in the DR-TB regimens. It aimed to phase out painful injections that can cause hearing loss. Bedaquiline and Delamanid are critical drugs for the life-threatening form of Multi Drug Resistant TB (MDR- TB) and Extensively Drug Resistant TB (XDR-TB), and hence there should not be any shortage of such medicines. Prathapan shared the concern that these drugs are under patent monopoly and there is no generic availability of them in the country.

RNTCP is depending on the donation and charity pricing from originator companies to treat patients rather than taking steps to start domestic generic production of these critical life-saving medicines within the country.

Raising his concerns, Prathapan stated that  despite India taking pride in being the pharmacy of the world, the dependency on drug donation is resulting in the denial of efficacious treatment and the right to health guaranteed under the Constitution. India being the highest TB burden countries in the world, the absence of required number of doses will result in the poor scale up of MDR-TB treatment and the risk of failure resistance. Moreover, once the donation programme is over, the government would have to purchase Bedaquiline and Delamanid at the very high prices of Rs 28,567 and Rs 121,413, respectively, for each drug for a six-month course. Prathapan added further that the dependency on donation is one of the barriers in the scaling up of TB treatment in the country, and if the situation continues India will not be able to achieve the target of ending TB by 2025, as announced by Prime Minister Modi during the End TB Summit in March 2018.

Prathapan wanted the government to ensure that there should not be any unmet demand for Bedaquiline and Delamanid and that those who required the medicines for treatment should get them. He wanted the prime minister to direct the health ministry to initiate steps to include these two critical medicines in the national list of essential medicines. Further, putting an end to dependency on drug donation, Prathapan wanted the government to initiate steps for domestic generic production of these two drugs either through a government license under Section 100 of the Patents Act or a Compulsory License under the Section 92 of the Patents Act covering lifesaving drugs for Drug-Resistant TB.

Steel Structure Housing: A New Roadmap for India’s ‘Housing for All’

Jasprit Bumrah: Has He Lost Gleam to Injury?