MoHFW data reveals that Indians aged 21-40 years made up the majority of those affected by Covid-19.

Indians aged 31-40 years old were hit the hardest by Covid-19 in the first and second wave of the pandemic, the Ministry of Health and Family Welfare revealed on Tuesday. Those aged 21-30 years old also underwent a similar, but slightly lower, impact. Collectively, over 40 per cent of those affected by the virus in the first and second wave belonged to the young age group of 21-40 years old, making them the most susceptible to infection spread. 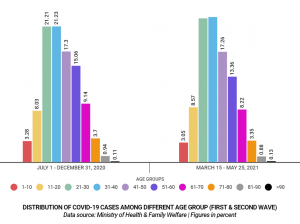 The infection spread was lowest among those aged above 90 years, as the lot made up less than 1 per cent of the total infections. The ministry also showed grim figures for those aged between 41-60 years, as they made up over 30 per cent of the affected. However, the infection spread for 51-60-year-olds went down in the second wave of Covid-19 that shook the nation between March to May 2021.

The figures for young adults (11-20-year-olds) were relatively higher. Ministry figures revealed that citizens of this age group made up a slightly higher number of the cases in the second wave of the virus, thus signalling an increased impact of Covid-19 on young adults. However, those under 10 made up a relatively smaller number of infections this year.

“We have seen that there was an increase of Covid-19 spread among young adults in the second wave. But this should not create an atmosphere of fear. While infection spread was high, we did not see any adverse impacts of the virus on children. They worked more as transmitters of the virus than those affected by it,” MoHFW Joint Secretary Lav Agarwal said at a press briefing on Tuesday.

Health officials also discussed the impact of new variants in the onset of the second wave. “Our research has shown that the Delta variant (B.1.617.2) played a key role in magnifying the second wave of the virus this year since it had high transmissibility. Occurrence of variants is very natural,” Dr VK Paul, Health Committee Member at NITI Aayog added.

He further spoke about the identification of a new variant of the Delta variant family, the Delta Plus (or AY.1), which is possibly capable of resisting monoclonal antibodies currently being prescribed as a cure. This variant has been formed due to mutation of the Delta variant.

“While its presence was first identified in March, public notification of the variant only happened in June. We have identified it as a variant of interest, and not as a variant of concern. We are yet to become familiar with its actual impact on humanity, bt we are constantly monitoring it,” Dr Paul said.

The mRNA viruses are particularly predisposed to errors in their application. When errors in the application of their RNA happen, the virus acquires a new character instantly. It can cause a change in the spiked protein region of the virus (through which the virus attaches to the human cell). If the virus becomes smarter than the previous version, it can render human technology of fighting the virus useless.

On June 15th, India reported 60,471 fresh infections, which signals a continuous decline in cases. There has been an 85% decline since the highest reported peak in daily cases (April-May 2021). Twenty-seven states are now reporting less than 1000 daily cases, which also indicates an overall decline in infection.

As of Tuesday, there are about 9 lakh active cases in the country. Recoveries are now twice the number of fresh infections. The average weekly positivity rate has further fallen to 4.8% from the peak of 21%.

India and Sri Lanka to Work Together on SARS-CoV-2