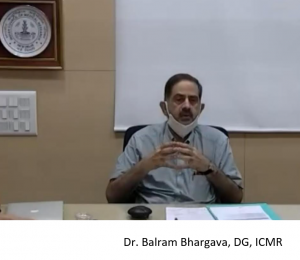 diagnosed in India due to low awareness and the lack of linguistically and culturally appropriate tests that are essential for diagnosis. Early diagnosis is key to optimal management of the disease and adequate care for people with dementia.

MUDRA Toolbox is a unique tool consisting of various tests and questionnaires and is sensitive to the factors that affect performance on cognitive tests including education, language and culture.

According to the Dementia India Report 2010 by Alzheimer’s and Related Disorders Society of India (ARDSI), there are approximately 5.29 million people living with dementia in India and this number is expected to increase to 7.61 million by 2030. Dementia refers to a neurological disorder that causes a decline in a person’s cognition and affects their ability to carry on with day-to-day activities.

Dr. R S Dhaliwal, Head-NCD informed that to address the gap in diagnosis, ICMR commissioned a multidisciplinary project with team of researchers from various fields including neurologists, psychologists, and speech-language pathologists to develop a culturally, educationally and linguistically relevant neurocognitive toolbox.

“ICMR has decided to make this tool freely accessible to professionals and researchers across the country. We hope this would be used in quality longitudinal studies and for early and accurate diagnosis of dementia. It includes a short 5 minutes cognitive screening instrument for the busy clinic, and a detailed version for more in-depth clinical testing or for research”, Dr. Bhargava added.

Prof. Jeyaraj D Pandian, Principal, Christian Medical College Ludhiana who in the Chair of this Task Force stated that MUDRA Toolbox is a comprehensive tool specifically to diagnose dementia in the Indian population. The investigators had worked very hard over the last 6 years to develop and validate the tool in Indian population.

Dr. Meenakshi Sharma, a senior scientist at ICMR, said “Most of the existing batteries are largely designed for educated English-speaking population, the MUDRA Toolbox, on the other hand, was developed to address cultural and linguistic diversity. The toolbox is designed to provide detailed neuropsychological profile of a patient and is a standardized measure of diagnosis for mild cognitive impairment (MCI) and dementia.”

Dr. Suvarna Alladi, Prof. Neurology, NIMHANS and Clinical Coordinator for development of MUDRA Toolbox said “The toolbox has been validated for diagnosis of dementia and MCI. The clinicians and researchers will be encouraged to use the tool and submit data online which will help for improving the performance of tool and coming up with its higher version.”