In the Age of Candid Photographers 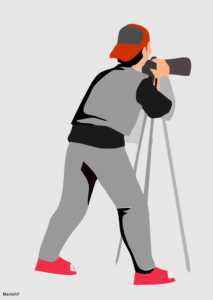 Taking a picture for posterity at a birthday, wedding or concert may harm our ability to remember the event fully. Researchers believe in a phenomenon known as ‘photo-taking impairment effect’.

Keeping that in mind, I’m reminded of the first time I got photographed; to put it in more honest terms, I suffer from short-term memory loss. It’s a self-diagnosed chronic disease that I use as an excuse to get out of racking my brains and digging up stories from the past. Due to this self-proclaimed life changing disease that I discovered around five years ago, my earliest memory of being photographed was back in 2014.

It was a dark, full moon night when my cousin knocked on my door; it was past midnight, I wondered what she wanted to tell me at that point which couldn’t wait till the next day. She sat on the edge of my bed and whispered, “He proposed.” For as long as I can remember, and don’t get me wrong, I know, I have portrayed myself as someone who can’t seem to remember things; but this one thing, I remember- she has always been insanely in love with her classmate to college mate turned boyfriend turned fiancé.

The minute she broke the news I sprang up and shouted “YOU’RE GETTING MARRIED! YOU ARE GETTING MARRIED! YOU ARE GETTING MARRIED! YOU’RE. You’re, you’re getting married…” My voice trailed off. It was then that it struck me; she was getting married. She was no longer going to be around, she was now his. Not mine anymore, but his. I instantly hated this fellow who thought he was good enough to marry my cousin. I am gravely ashamed of what I said next, but I would be ever grateful if we could blame my lack of etiquette on my chronic disease too- I said a bad word. Looking back now, I don’t know why I made such a big deal out of it; probably because I insulted the love of my sister’s life right in front of her. I used a bad word on him and asked her to turn down his proposal. Appalled and even a little hurt, she turned to me and said, “excuse me?”

Not regretting my words one bit, I looked her in the eye and said, “He’s not good enough for you.” I paused for a while before I began again, “Either way, not like my opinion matters anymore. You’re going away aren’t you, to live with that- ” So I used the word again. My sister laughed a little before she spoke “So that’s what this is about. You’re upset I’m going away.”

I had pulled the sheets up so that she wouldn’t see how upset I was amidst the darkness; I tugged on the end of the sheet with my feet and created an opening for my eye to see whether my cousin was angry or not. She wasn’t; she continued to laugh. “Hey, love is too weak a word to describe what I feel for him.” She said- and this time, she wasn’t laughing.

When she realized I didn’t have anything else to say, she held my hand and told me something she has stuck to, till date, “Just because I’m going away to live with someone else doesn’t mean I’ll stop being your big sister. I’m always going to look out for you. I’ll always be around. Okay?” “Okay.”

Days and months passed and all I could hear around me was wedding talk-what the bride was going to wear, where the married couple was going to spend their honeymoon, how many people the groom’s side would be bringing, and most importantly and frankly the only one I bothered to pay attention to, the number of payasams they would serve at the sadya. As the days inched closer to the wedding date, the number of people in my house drastically increased four-fold. I couldn’t blink my eyes without the entire house knowing about it; I just wanted it all to end.

I could take the nosey relatives, the wedding talk, the overly enthusiastic entertainment team- I could take them all, but if there’s one thing that triggered me, it was the photographer and his assistant. Due to my inferiority complex, I always hated pictures- hold that thought, I told you about me using the bad word, I might as well tell you the truth here. I had a grumpy face on the entire time, I didn’t want the photographers catching my facial expressions that clearly showed displeasure. I didn’t have an inferiority complex, I just didn’t want myself to get captured when I was incapable of putting on a happy face. But the damned photographers decided to add a prefix to their profession-they called themselves candid photographers. Which meant they had a dirty, irritating habit of capturing you in your moment and element- off guard.

Since the moment the candid photographers stepped into my house, I have tried my level best to avoid them. For seven successful hours, I managed to zoom past them; but then arrived the eighth hour. The candid photographers decided to expand their crew by inviting three others to help them out with the pictures- that meant three extra pairs of eyes and cameras. It was a disaster. I had to disappear from the vicinity completely before they got a shot of my face.

As all good things come to an end- my ordeal ended too. My cousin got married and left for Bali on her honeymoon. I was sad, upset even- love is too weak a word to describe what I felt for my big sister. But it was time to let go. It was time to let her go, to that-I did it again. I was glad the ceremony was over and that I could go back to my normal life- or so I thought.

Three weeks after the wedding, the photo album and CDs arrived; I scoffed and walked away from them as I patted myself on the back for successfully escaping the photographers. I was not on those CDs and no one would ever have to know how I felt about the wedding as a whole.

My entire family sat down in front of the television as my brother handled the remote and the speed at which each photo would be played. For the most part, I could see even my cousin doze off; it was a boring montage of people we didn’t know eating their food or talking to others. It was just a mechanism used by my elders to find out who attended the wedding and who didn’t- sometimes, I don’t understand them. Scratch that, I never understand them.

My cousin asked my brother to flick through the wedding pictures and go directly to the pictures of the reception. My brother stood in front of the television trying to figure out how to skip the pictures. After a good ten minutes, I noticed him peering into the screen and then staring at me; I sensed mischief in his eyes. He slowly, very carefully moved away from the screen and paused on the one picture the candid photographers managed to click of me- it was worse than I had expected. It wasn’t a shot of me grumpy, it wasn’t one of me trying to avoid the cameras- but it was one of me digging my nose.

The sly nitwits captured me; they did it, they outsmarted me. As my family stared into the television and then at me, they couldn’t help but burst out laughing. Even my grandfather who hasn’t moved an inch in three years chuckled as he saw the picture. My sister laughed as she walked up to me and whispered in my ear “At least they didn’t capture your grumpy face. Be glad” I shot her a look and sunk into the sofa as I watched my family laugh at the picture.

Like I had mentioned in the beginning, taking a picture for posterity at a birthday, wedding or concert may harm our ability to remember the event fully. Researchers believe in a phenomenon known as ‘photo-taking impairment effect’. Perhaps this never happened at all. Maybe all of this was a figment of my imagination and a result of my chronic self-proclaimed, self-diagnosed short-term memory loss.

Think about it, do I really look like the kind of person who’d let myself get captured while digging my nose? Alright, I probably do.

The author is a short story writer based in Chennai. She can be reached on twitter @takertheking

The new era of virtual crimes