May 3rd has been declared by UNESCO as World Press Freedom Day. This day urges the government to 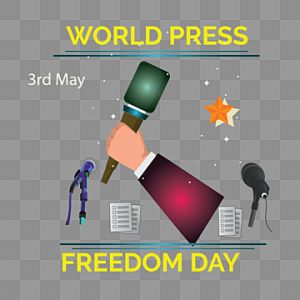 commit to press freedom and commemorates those journalists who lost their lives while reporting. Media is the fourth pillar of democracy. An active media is the safest indicator to segregate a true democracy from one that is democratic on paper but is autocratic. There is no doubt anywhere that India’s mainstream media no longer performs journalism. A large stimulus for this behavior is the result of the government’s blatant tampering to stifle any reporting done, by an individual or publication, which criticizes them. For instance, when ABP News unearthed the truth behind Chandramani Kaushik, both the managing Editor Milind Khandekar and anchor Punya Prasun Bajpai had to resign. Kaushik was a farmer from Chhattisgarh who on a video conference with the Prime Minister claimed her income to have doubled after planting custard apple (sitafal). Later, ABP News journalist found that she was tutored to give this statement.

In 2020, India featured on Reporters Without Borders’ (RSF) list of Five Deadliest Countries for journalists. In RSF’s first World Press Freedom Index of 2002, India ranked at 80th position and in its 2021 report, the position dropped to 142th. Another index for journalists is the Global Impunity Index created by the Committee to Protect Journalists (CPJ). It ranks countries where the murder of journalists received complete impunity. Since its inception, India has always featured in its list, highlighting the dire neglect for our journalists.

UNESCO’s Observatory of Killed Journalists mentions 45 journalists’ deaths between 1996 to 2020. But Thakur Foundation’s Getting Away with Murder reveals 40 journalists dead within 2014–2019. They also mention that in the same time frame, 198 severe attacks on journalists were committed while they were reporting or were performing investigative work. No official data is kept by the National Crime Records Bureau as it labels the circumstances surrounding journalists’ death as “vague/unreliable.”

“Censorship” for Reporting the Truth

The Indian constitution offers Freedom of Speech and Expression to every citizen under Article (19)(A). The Press Council of India (PCI) draws from the same Article, the validity for Freedom of Press. Naturally, the restrictions placed by the second clause to Article 19 are also applicable to the Media. Freedom can be stripped if their speech violates the sovereignty and integrity of India, security of the State, friendly relations with foreign states, public order, decency and morality, contempt of court, incitement to an offense, and defamation.

Introduced by the British government, sedition was used to stifle Indian protests against the Raj. After 71 years of the Indian Constitution, this law has not been scrapped despite the law being not used in Britain since 1972 and scrapped altogether in 2009. Media persons who were recently charged under sedition are India Today’s Rajdeep Sardesai, Qaumi Awaz’s Zafar Agha, National Herald’s Mrinal Pande, and Caravan Magazine’s Paresh Nath, Anant Nath, and Vinod Jose.

The other hurdle that journalists face in India is Defamation charges where any written or visual dissatisfaction toward the government can lead to life imprisonment. Justice Sanjay Kishan Kaul and Justice Hemant Gupta have noted that “Expression of views which are different from the opinion of the government cannot be termed as seditious. It cannot become sedition only because one has a different view.” Still Home Minister Amit Shah’s son, Jay Shah, has filed a defamation case against an article published by The Wire.

Lastly, death becomes the sharpest way of censoring. The case of Gauri Lankesh has been permanently stitched to our minds. But many journalists have received death for their honest reporting. Ram Chander Chhatrapati, the journalist who exposed the wrongdoings of Gurmeet Ram Rahim Singh, was shot at point-blank range outside his own residence. His case received justice 16 years after his death and is the only case resolved amongst 55 others since 2010.

Raghavendra Dube after reporting attacks on 2 other journalists was found dead 5 hours after he left the police station. These deaths occurred in Maharashtra, the only Indian state with its own act for protecting journalists, named Maharashtra Media Persons and Media Institutions (Prevention of Violence and Damage or Loss to Property) Act. Yet the law was not used.

Post emergency, in 1978, the Editors Guild of India was established by Kuldip Nayar to protect “press freedom and for raising the standards of editorial leadership.” It had successfully taken the issue of press freedom on a national level by organizing protests during the Anti-Defamation Act and Prevention of Terrorism Ordinance. But over the years, the Guild has lost its initial resolve of protecting journalism, with Kuldip Nayar himself acknowledging that “we started giving up on what we stood for, and the Guild stopped functioning.”

India is not the only Asian democracy undergoing a severe attack on journalists and press freedom. RSF has labeled China the “biggest jailer of press freedom defenders” where 120 journalists were currently put behind bars. Myanmar under its coup has arrested 38 journalists. Freedom Network reported that in Pakistan, 135 “violations against media practitioners” were observed between September 2018 to January 2020.

Freedom of the press is the cornerstone of any democracy. Yet, we see the largest democracy become one of the most dangerous places for journalists. As such, it becomes crucial to guarantee protection to those exercising their freedom of expression professionally to benefit the masses with news and information on matters of public interest. If the current act of media continues then India’s press freedom has already died.