It is important to look at agroecology in a broader perspective, which is transdisciplinary, participatory, bottom-up, action-oriented, and politically engaged focusing on food system change.

“We need a shift from an economy of limitless greed scientifically put into GDP and growth. We are living through about 30 years of a real build-up of a health emergency, where people are fed with 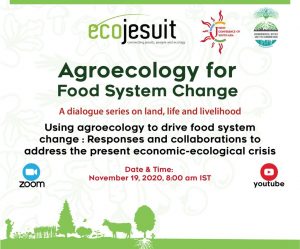 toxic food, nutritionally empty food just because of super profits are made. The food economy is shaped to give us our ‘daily poison’ and not daily bread,” said Dr Vandana Shiva, Founder of Navdanya, and the Research Foundation for Science, Technology, and Natural Resource Policy (RFSTN), India. She was speaking at the “Agroecology for Food System Change: Responses and Collaborations to Address the Present Economic–Ecological Crisis’” organised by the Jesuit Conference of South Asia in collaboration with Ecojesuit Network and the Initiative on Environmental Justice and the Common Good of Santa Clara University in California, USA.

Dr Shiva said “Food is the currency of life. If we look at it spiritually, everything is a sacrament—from the smallest of microbes to the planet as a whole, there is a seeking of participation in the integrity of creation.” We redefined food as a commodity that has led to deceases. We are caught up in an extractive economy. She called for redefining global economy and shifting it from an economy of indifference to an economy of compassion

Dr Shiva spoke of the Green Revolution and the crisis that brought in. She said the magic word that is used in industrial agriculture is ‘yield per acre’ to feed the people. It does not measure how much we produce on our farm, do not measure the fertility of land where we grow food, the vitality and abundance and health of life. There is no talk of the quality of food.

With this method there is no need for even a single person going without food. Unscientific food system has given us hunger. It is such a hungry system driven by profits, and is guided by mismeasures like yield per acre, producing GMO soya including by burning the Amazon.

The pandemic has grown because for forests were invaded for an agrobusiness model that does not care for the world. New diseases are coming up, including the Corona. Three hundred new diseases have come from the forests including the Ebola, SARS, Corona, and many. Wuhan virus is the result of invading other species. The hunger for profit is creating diseases. The COVID lockdown is basically an economic emergency. The ILO has stated that billions will lose their livelihood. Climate change is linked to an agribusiness and commodity driven system, which is based on poison.

Dr Shiva said integrity of creation means integrity of life, and that is what is required. Food and water make life. Lab food leads to food insecurity. She spoke of scaling up horizontally, which involves more people. Gardens represent diversity. She added “What we need is gardens of hope”. The place of work is important for creation, rather than for exploitation. She called foe redefining the future of humanity through food and caring for the common home.

Dr Pedro Walpole, Coordinator, Ecology, Global Ignatian Advocacy Network, and Director of Research, Institute of Environmental Science for Social Change, Philippines, said that we live in a Common Home and seek to produce healthy food for all of us. How agroecology can help bring about social change that is a need globally, which is highlighted in UN report that over 2 billion people do not have regular access to safe, nutritious and sufficient food. This includes North America and Europe where 8 per cent of the population are poorly fed. There is much pressure on poor countries. Over 70 per cent of the population depends either directly or indirectly on agriculture.

There is a no option, but to revive local to global focus on sustainable agriculture. There is a direct relationship to the broader ecological cycles that we have to keep the balance. Greater actions on the ground to develop communities of practice are required.

Also Read : Recognize Pastoralists and Their Stewardship in Environmental Sustainability 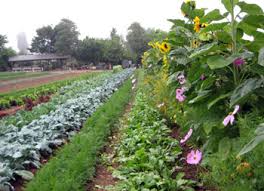 Dr Walpole quoted Pope Francis, who said, “in order to continue providing employment it is imperative to promote an economy, which favours productive diversity and business creativity”. There is a great variety of small-scale food production systems using small land parcels that helps feed large number of people. Dr Walpole highlighted economies of scale that end up forcing smallholders of land to move out of their land and abandon their traditional crops. Civil authorities have the right and duty to support and promote small producers and differentiated production for economic freedom, for which all can effectively benefit, and restrains those processing more resources and exercising greater financial freedom. Business is a noble vocation directed to producing wealth and improving the world. Sharing the goals of the webinar, Dr Walpole said it is meant to share and learn about each other’s work on agroecology and community based participatory action research. Further, the webinar aims to develop a shared understanding of needs and opportunities for food systems change in the context of interconnected socio-economic and ecological crises, help guide emerging food system changes and inspire action for food sovereignty and agripreneurship. Promoting ecological conversion and collaboration that is called for in Laudato Si, which is the second encyclical of Pope Francis that has the subtitle “on care for our common home”, is another important objective of the dialogue being held, added Dr Walpole.

Dr Christopher M Bacon, Associate Professor of Environmental Studies and Sciences, Santa Clara University, in his presentation on “Empowered Partnerships for Food Justice”, linking agroecology and participatory action research to transition towards food sovereignty in Nicaragua and California, said that food connects people, planet and values. Social values and relations are important that connects people. The challenge is we have moved from an incredibly diverse agriculture to uniform agriculture. Around 20 per cent of land on earth is now degraded and almost 2 billion people suffer from micronutrient deficiencies. Dr Bacon said the current food system is producing and abundance of energy-rich, but nutrient-poor crops.  Now it is time to move back to diversity in a systematic way to address the challenges. He shared his own experiences of working with agrarian reform cooperatives, livelihoods and fair trade coffee, diversified faring and dietary diversity, and food sovereignty and resilience to global change.

Discussing agroecology, Dr Bacon said it is important to look at agroecology in a broader perspective, which is transdisciplinary, participatory, bottom-up, action-oriented, and politically engaged focusing on food system change. Building long-term community partnerships are relationships are required to realise this considering local context, knowledge and creative responses to help create resilience. Dr Bacon shared three testimonials of food justice responses. While the first one was on grassroots food justice and entrepreneurship sharing culturally relevant seedlings in San Jose, California, the second one presented a regional food systems response to build food security and justice during the COVID-19. The last one was on urban gardeners sharing knowledge and building community during COVID-19. The testimonials and insights from the field provided clear examples of action from La Mesa Verde (Sacred Heart Community Service), a network of urban gardeners in San José, California, Valley Verde, a community food system and urban agriculture model in the San Jose/Silicon Valley area that promotes healthy eating and provides food access and micro-entrepreneurship, and Fresh Approach whose mission is to improve healthy food access in the Bay Area communities in California.