Journalism in Times of Pandemic: Watchdogs of Democracy under Challenge

Without active citizenship and watchdog mechanism, we cannot achieve deeper meaning and better possibilities of democracy.

Journalism is intrinsically linked to democracy, and if we use the warrior imagery, then journalists are truly the warriors of democracy. Such an image is more valid today as upholding democracy and democratic value is a huge challenge unlike ever before. Media is the fourth estate which safeguards, 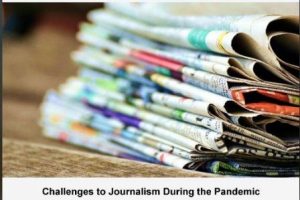 protects and holds a mirror up to the other three pillars of democracy, and today particularly when all of the four pillars are in sync, then either we are living in utopia or there is something seriously wrong. Hence today, especially in the times of pandemic and in the challenges that it has thrown, journalism has a very critical role to play.

“After pandemic, health reporting, which was never the priority came to the forefront, but even then the media was specifically reporting from the pharmaceutical and capitalism point of view, but no one focused on the fallout of what women were going through, how were the Public Health Systems were performing, how unsafe abortions went up drastically, journalists were not willing to look at any of these things during the pandemic”, said Sadhika Tiwari, a development journalist based in New Delhi. She was speaking at the webinar Challenges to Journalism During the Pandemic organised by Praxis along with Partners in Change (PIC). The discussion was held to bring forward the voices of the frontline fighters. Journalists and media professionals, who have been at the forefront of safeguarding and furthering democracy, shared their views particularly from the perspective of the marginalised.

Sadhika Tiwari shared that of all the people, who have forgotten media as the fourth pillar of democracy, sadly media personals take the majority as they are the most reluctant when it comes to reporting on marginalised communities, development issues and issues that have bothered the majority of this country. Even at the editorial space, the health issues coverage considerably went down. There are only a few organisations that are left in the country which are still covering health, nutrition, gender issues, minority rights, etc., and after the pandemic the space given to these beats took a backseat and the space given to these issues massively shrunk. The whole narrative has been focused on the urban issues and didn’t cater to anyone beyond that, except for the community journalists who constantly struggled to bring forward the ground reality.

Hence, it becomes important to safeguard their right to reporting, as they are the ones who live there and don’t have an outsider lens to the problem, they understand how the problem functions, unlike urban journalists.

Also Read : Tackling the Menace of Fake News: Pandemic and Beyond

Today when journalism itself is being questioned, the working conditions of the journalists have also degraded to its lowest point. Nivedita Jha, President of South Asian Women in Media (SAWM), Bihar, said, “These are dangerous times as many full-time and freelancing journalists are losing their jobs or are facing salary cuts, still it is a type of work which cannot be put to halt. Journalists are going to the ground level and reporting from there, but are not protected in terms of their rights.” Supporting her views, Saumya Khandelwal, an independent photo journalist based in New Delhi, further shared about the negligence faced by the photo and video journalists in a media house. Apart from being a very thankless job, even the salary structure of these journalists is way less as compared to a writer in an Indian media house. This is in stark contrast as compared to the US or any European country. “For any international agency or publication, the fact that we are putting ourselves at risks and going out requires us to have hostile environment training. But this is a privilege that not every journalist in India has. There were a lot of photo journalists who got infected with COVID while reporting from the field and still continued to capture and report in the hospital after getting hospitalised. The world is making warriors out of them but what we need is for the organisation to understand the work that we do and to provide proper safety measures for that”, she asserted. If the invisible risk of the pandemic was not enough, the photo and video journalists were also being laid off by the publications which added to the burden of sustaining journalism. Arun Khote, the founder member of Peoples Union for Human Rights (PUHR), Uttar Pradesh, supported their views and shared that 30 to 40 per cent of the people placed with the big media houses had lost their jobs and 400 journalists died during the pandemic but none of their families received compensation from the 50 lakh corona warrior compensation funds as it was only for accredited journalists which were only 10 per cent out of 400 who died. 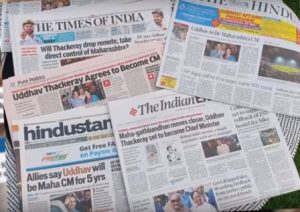 Throwing light on the challenges faced by the health beat reporters, Banjot K Bhatia, a health reporter for eight years now, shared how the lack of correct and complete data affects health reportage. According to her, there is news coverage on the number of tests being conducted but there is no breakdown of the total tests in the category of RT-PCR tests and antigen tests. This segregation is important because the efficacy of PCR is much better than antigen. Moreover, the data largely consist of confirmed cases and deaths, but still the complete data are not reported as it is much beyond that like the figures on how many healthcare workers were infected and how many cases have come up from the rural parts of India. “Journalists should not be squarely blamed for this because when these questions are asked to the government the response given is different from the questions or journalists are told not to ask such questions due to no maintenance of data. As a responsible citizen it is their duty as well to ask the government regarding the unanswered questions of the journalists”, she said. The other challenges came from less to no coverage of issues that were not COVID-related like TB, nutrition, female sexual health, education, immunisation, etc. Organisations like WHO, UNICEF and World Bank have given reports that non-COVID related issues are being adversely impacted by COVID. Hence, if stories on these issues are not making adequate space in reportage, there are high chances of missing out on COVID reportage itself.

Echoing the views of the panelists before her, Banjot also stressed on the need of a Standard Operating Procedure (SOP) for the safety of reporters and camera persons, so as to make themaware on how to act on field during the pandemic. “With nine months in pandemic and with no scope of it of going away, it is high time that media organizations come up with an SOP. There is also a mental fatigue that all of the journalists are facing after constantly reporting on COVID-related issues, can anything be done to address this concern?”, questioned Banjot K Bhatia.

Mahima Jain, an independent journalist and editor with nearly a decade of experience in the print and digital media, gave a personal touch to the whole discussion by focusing on the decreased feeling of job satisfaction by the reporters and the reasons behind low quality of reporting during the pandemic. One of the major reasons that she cited was the unprofessional and inappropriate attitude of the media houses towards the freelance journalists, who are at the forefront of covering the ground realities of remote areas. An unequal power equation between the editors and the publishers also adds on the challenges.

“For long journalists have been conditioned to consider their profession as a service and not as a source of secure livelihood, but there needs to be some middle ground. The system is designed to favour everyone except the one who is trying to tell a story. We don’t expect charity as freelancers but some dignity and respect will be really good”, said Mahima Jain.

Also Read : How Media Framed the Good and the Bad of COVID-19?

Paving a way forward, Sujata Madhok, a journalist and activist deeply concerned with issues of development and people’s rights and General Secretary of the Delhi Union of Journalists affirmed the need of unity among the journalists. She shared that in 1955 there was an act named “Working Journalist Act” in the newspaper industry which defended the rights of a journalist and laid down working conditions for them. Under the Act, the journalist was entitled to a three months compensation for retrenchment pay and if it was the editor, he/she got six months of retrenchment pay, but now none of that obtains as in September 2020 the parliament passed three labour courts which rendered 40 labour laws null and void which included the Working Journalist Act. According to her the manner in which people were thrown out of the organizations was completely illegal as they were not even given the kind of compensation that was due to them and the procedures were also not followed. “It’s ironic that we talk about the rights of everybody else but don’t have a space where we can talk about our own rights. Because we are not unionised or collectivised there is so much impunity and we can fight that only by coming together and resisting that is the only one solution if we have to survive as a profession”, said Sujata.