Kaala: Creating a symbol with an epic and an idea

Rajnikanth’s and Ranjith’s Kaala fares better than their previous outing.

uperstar Rajnikanth and director Ranjith’s previous outing Kabali was released amongst much fanfare and promotions. Though the movie was a hit, it fell short of the regular cinema fanatic’s expectation of a Thalaiva movie. But it also disappointed the fans of Ranjith, who at that time was only two movies old. The movie seemed to be caught in a myre of showcasing Ranjith’s easter eggs and capitalising on Rajni’s stardom. So, when the duo announced Kaala, the expectation upped the ante again.

Kaala on the outlook is the typical don story. Karikaalan (Rajnikanth) comes with his family in search of livelihood to Bombay. And he grows to become a don whilst trying to protect the blue collar community in Dharavi, which keeps Bombay running. The villain is a nativist politician, Hari Dhadha (Nana Patekar) who rose along with Kaala and wants to make Mumbai clean and pure. And therein comes the conflict, story and a climax that is debatable.

“The area where the movie stands different is the treatment to the issue handled in the story and the infusion of an epic, The Ramayana. The references to the epic just cannot be missed in the movie, although they aren’t explicit.” 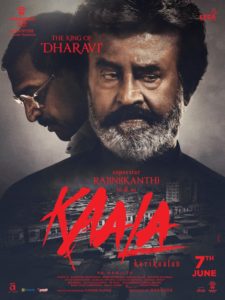 And again, Ranjith has taken the anti-hero route that is, the Raavan point of view. There seemed to be parallels one could draw to Mani Ratnam’s Nayagan and Ravanan, which dealt with similar topics individually.

Rajnikanth and Nana Patekar proved their mettle, although the latter’s dubbing of dialogues could have been avoided. Samuthirakani effortlessly plays a perennial alcoholic. Manikandan and Dileepan play Kaala’s children with fervour. Other characters in the film on either side of the conflict fit their parts.

The movie is technically sound too. The production design has been crafted to bring forth Dharavi to our eyes. The cinematography of small spaces is well done by Murali G. Sreekar Prasad’s intelligent editing. Santhosh Narayanan has come a long way since Kabali; his grunge metal cues are used correctly and not at every glance and breath taken. And as usual Ranjith’s easter eggs are hidden as information, set props and dialogues. The team has made an effort to blend the cinematic subversions of Ranjith and the talent of the Superstar to perfection.

“But, the highlights of the movie are its women. Easwari Rao as Selvi and Anjali Patil as Charumathy/Puyal wield the movie with their might. Though there was an evident language barrier, Huma Qureshi makers her presence felt. They, along with other women actors in the movie break the stereotype of what women are meant to play on screen. They were written with purpose to the story and their purpose however small, is felt.”

With Kaala, Ranjith is explicit about what he wants to convey to his audience. And he has used the biggest power on screen to tell this message. Like what Hari Dhadha does when he is offered water as courtesy in Kaala’s house or what the police do to Charumathy to subdue her. And he uses the biggest on screen persona to do this.  The problem comes in there. This is not a movie where the story was about the people or an idea alone. The idea gets caught once again between the star and the director. What should he give importance to: his idea of infusing an epic to symbolize a revolution or the star that Rajni is.

Unlike Kabali, this movie fares much better in bringing together Ranjith’s form of storytelling and Rajni’s prowess as a star and actor. And it does a much better job of driving home the idea of a revolution. Kaala is more than just a man here. He is an idea and a symbol of revolution. And that is what may not fare well with everyone in the audience. Kaala is no Baasha for the Rajni fans, but it neither is Madras.