Like the previous budget, the present budget can also be termed a ‘KIIFB budget’, as many of the proposed projects will be routed through KIIFB. 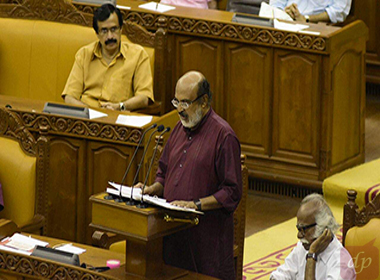 The Economic Review 2017–18 tabled in the Assembly on February 1, 2018, highlighted the critical issues faced by the economy of Kerala. As per the report, the growth rate of the Gross State Domestic Product (GSDP), which consistently stood above the national average, began to show a declining trend from 2012–13 onwards. The state that receives the highest share of remittances in the country was negatively affected by the policies of nationalisation in the Gulf countries. This has had a direct impact on the consumption demand. The declining remittance had a ripple effect on other fields such as trade, real estate and construction. In addition to the slowing economy, the fiscal indicators do not pose a promising picture for the state.

Against this background, the third budget of the LDF Government was expected to provide some tangible measures to save the ailing economy. On the revenue side, Finance Minister (FM) Thomas Issac continues to be hopeful of the Goods and Services Tax (GST) bringing in more revenue to the state. Even though the estimate for the state’s tax revenue for FY 2017–18 has been revised to ₹48,823 crore from ₹53,411 crore, the estimate for FY 2018–19 stands at ₹58,588 crore. With a 20 percent increase in the state’s tax revenue, the total revenue receipt of the state is projected to cross ₹1 lakh crore in 2018–19. However, these projected numbers do not take into account the reality of the state’s economic condition. While the government accepts the fact that the economy is slowing down, there is no clarity on how it will realise the target of ₹1 lakh crore as revenue receipts, when the economic activities in the state are in a downward spiral.

KIIFB is nothing but another name for market borrowing, and if the government is successful in mobilising ₹3000 crore from the market through the issuance of bonds, theoretically, it will add up to the fiscal deficit of the state

On the expenditure front, the FM has maintained the tag of Kerala being a ‘welfare state’ by offering a slew of welfare schemes. The total expenditure of the state is projected to increase by 14 percent. As with the previous budget, the present budget can also be termed a ‘KIIFB budget’, as many of the proposed projects will be routed through the Kerala Infrastructure Investment Fund Board (KIIFB). KIIFB is considered an out-of-the-budget proposition but a scrutiny reveals that every aspect of it is linked with the budget. For instance, as per the KIIFB Act, KIIFB should receive ₹1  lakh crore as grant from the government before the repayment period. This amount, which is equal to the projected revenue receipts of Kerala for the FY 2018–19, will be given as share from the petrol and motor vehicle cess collected. Until now, ₹4270 crore has been granted to KIIFB, which is only 4 percent of the total grant amount. In the coming year, with more funds flowing into KIIFB from the motor vehicle and petrol cess, the government will face budgetary constraints to meet up its other expenditure.

Another platform that KIIFB is targeting to mobilise funds is through the ‘NRI Chits’ of the Kerala State Financial Enterprises Ltd. (KSFE). The idea is that the amount mobilised from the Non-resident Indians (NRIs) through ‘chits’ will be invested in KIIFB bonds. But here also the FM paints a contradictory picture. On the one hand, the government is worried about repatriation from the Gulf countries, and has even earmarked ₹17 crore for the rehabilitation of the repatriates; on the other, the government wants NRIs to invest in ‘chits’ that could be utilised for KIIFB.

The previous budget had mooted proposals worth ₹54,000 crore to be implemented through KIIFB. In his budget speech this year, the FM had announced that funds were sanctioned for projects worth ₹20,000 crore. However, apart from ₹4270 crore granted to KIIFB, there is no clarity on the money in the KIIFB account. Though the FM outlined the plans to mobilise funds through the issuance of various bonds, he remained silent on the money in KIIFB’s kitty.

The state government has not presented any concrete measures to lift the economy from the impending crisis. The government has put all its eggs in one basket called KIIFB, and if KIIFB fails, the government does not have an alternative plan. Whether KIIFB is a Frankenstein’s monster in the making that could turn against its maker or the economy’s saviour is a poser that would baffle many.

The writer is a Journalist and Assistant Editor at Delhi Post. She can be reached on twitter
@narayananjaya

Ageing in India: Have we done enough?

Patriarchy and food: Can I please eat?