Madhyamaheshwar: A Journey of Highland Pilgrimage

The temple of Madhyamaheshwar is one of the ‘Panch Kedars’ (Lord Shiva) believed to be built by the Pandavas when they were on the way to Swarga (heaven) after the Great War of Mahabharata.

I along with my colleague trekked to Madhyamaheshwar (3220 m), a highland pilgrimage, located in Rudraprayag District, Uttarakhand. A trek goes to Madhyamaheshwar from Kalimath (1260 m), the abode of Goddess Kali (a female folk deity). It is believed to be a place of a great poet Kalidasa, where he composed his famous Sanskrit 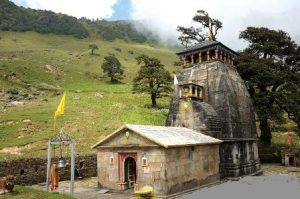 treatise Meghdutam. Situated on the bank of the Kali Ganga, a tributary of the Mandakini River, Kalimath is one amongst the Shakti Peeths of Uttarakhand. First, we traveled to Kalimath from Srinagar Garhwal by bus (60 km) and stayed overnight in a Dharmashala. Srinagar Garhwal (540 m) is situated on the left bank of the Alaknanda River on the way to Badrinath about 130 km from Haridwar (288 m). The next morning, we trekked to Ransi village via Raunlek, a village that lies at 2100 m altitude. A narrow and steep trek goes to Raunlek from Kalimath.

It was very hot noon. Dense pine trees on the way further accentuated the intensity of heat. Thereafter, a trek with gentle slope goes to Ransi, an old traditional village, through ups and downs. It lies in a serene environment, which has spiritual significance as the two temples of Lord Shiva are situated in the village. We stayed overnight in the temple. Early in the morning, we moved to Madhyamaheshwar. On the way, we passed through Gaundar village, the last inhabited village lies just on the root of the Madhyamaheshwar alpine pastureland and on the bank of the Gaundar perennial stream. It was easier to reach Gaundar as the trek was smooth and the slope was gentle. A straight, narrow, and steep slope trek starts from Gaundar. The whole trek was very calm and we were trekking lonely. We passed through dense pine forests and spent about five hours.

The Madhyamaheshwar River flows below through a deep valley. Entering into the oak and then coniferous forests regime was pleasant and heartfelt.

We took rest in a dense forest area. A rich diversity of wildlife is found in these forests, some are very dangerous. Fear of attack from wild animals made us worried. After a short rest, we continued our travel. It seemed an endless journey. The sun was about to set. We did not know how much we need to travel. While continue thinking about the journey, we observed the ending of the coniferous forest and saw vast alpine pastureland. The tree line ended. We were on the top of the trek. For a moment, we stopped there and took rest. We saw the alpine grasslands of Madhyamaheshwar, snowy mountain peaks of the Himalaya and the Mount Chaukhamba. The sun was spreading its golden rays. Most of the parts of the Madhyamaheshwar alpine pastureland and its surroundings were covered by dense clouds. This spectacular view of the high Himalaya, alpine grasslands and dense forests compelled us to view the landscape uninterrupted. It seemed that time has come to standstill. We were stunned and stagnant.

Also Read : Into the Clouds of the Upper Himalayas

Chilled cold winds were blowing. After a while, we moved a little downward and saw the Lord Shiva temple at Madhyamaheshwar, which lies on the lap of the Mount Chaukhamba. A few people were setting on its premises, and Sadhus (sages) were sitting around a Dhuni (fire pod). 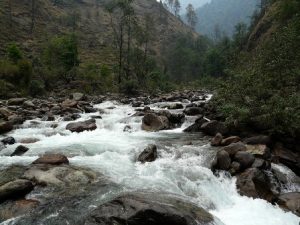 We greeted all of them and immediately after it, ate dinner, and then went for sleep. Morning hours in Madhyamaheshwar are very cold because of the chilled winds blowing from the snow-clad mount Chaukhamba. As the temperature was very low, it was difficult to take a bath. However, we managed hot water. The sky was clear. We could see the Madhyamaheshwar temple. The visibility was clear as there were no clouds during the morning hours. Hence, the surrounding area of Madhyamaheshwar was visible.

The temple of Madhyamaheshwar is one of the ‘Panch Kedars’ (Lord Shiva) believed to be built by the Pandavas when they were on the wayto Swarga (heaven) after the Great War of Mahabharata. It is also believed that Adi Guru Shankaracharya visited Madhyamaheshwar during the ninth century AD and renovated the temple.

When the first sun’s rays fell on Mount Chaukhamba, it looks like a golden peak. Slowly clouds arose out of the snow-clad mountains, and covered the entire alpine pasture.

Budha (Old) Madhyamaheshwar lies on the upper slope, about two km distance from the temple. The area has a gentle slope having full of flowers, medicinal plants and herbs.

The Madhyamaheshwar River, which originates from Mount Chaukhamba flows from the left side of the temple. Madhyamaheshwar is known for meditation. The divine waves blow and one can feel the presence of fairies and witches. The pilgrims visit the temple during the summers because winter seasons remain snow-clad. Three types of tourism—cultural, natural, and adventure—are practiced here. It is about 20 km trek with tough terrain. Accommodation facilities are minimal and, therefore, only few pilgrims visit the temple. The idol of Lord Shiva is brought to the Omkareshwar temple of Ukhimath (1400 m). The Madhyamaheshwar Mela is celebrated in Ukhimath on the day when the idol of Lord Shiva reaches here in November. Madhyamaheshwar is a summer pasture, where livestock herders of the Madhyamaheshwar Valley migrate with their animals during summers. After spending two days in Madhyamaheshwar, we went back to Srinagar Garhwal through the same route.