The microplastics are much more hazardous than macroplastics because of their availability in all levels of marine food webs.

Microplastics are usually plastic particles of less than 5 mm. It may be primary or secondary microplastics which can be found in coastal environments all over the world. 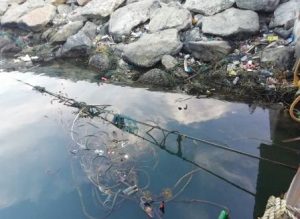 Also, the microplastics are much more hazardous than macroplastics because of their availability in all levels of marine food webs.

In a study conducted by the Department of Remote Sensing, Bharathidasan University covering eight different sampling stations along a 71 km long coastline with both urbanized beaches and undisturbed coastal areas along the Indian Ocean, the researchers assessed the magnitude of the microplastic pollution problem. The study revealed that microplastic is one of the carriers of major pollution to the marine environment found along the entire Kanyakumari coastal stretch of southernmost India. The study came out with baseline data that helped in understanding the occurrence and distribution of microplastics (MPs) in the near-shore sediments. The researchers said that further studies would help in understanding the transport of microplastics as well as evaluate their interaction with the marine ecosystem of the region.

Researchers found an overall higher abundance of microplastics at the urbanized beaches as compared to undisturbed beaches due to significant human influence such as tourism activities as well as fishing. While tourist beaches had high levels of microplastics, more remote beaches and fishing ports also exhibited large amounts of microplastic pollution with plastic debris accumulation to the highest degree affecting the marine food web.
When sediments were analyzed, it was found that the tourist beaches have microplastics pollution with 150 particles (44 per cent), harbor beaches with 99 particles (28.5 per cent) and the coastal stretches along the undisturbed areas with 15 particles (4.3 per cent).

These items also likely to contain fibres from clothing and other synthetic textiles almost two fold more as compared with the tiny fragments from larger objects that had broken down over time.

In the present study, scientists tracked microplastics samples from different beach sediments, the average of which is found to be up to 43 particles per 50 g dry sediments. New research would help to identify mechanisms that influence their transport and deposition in the coastal sediments as well as evaluate the possible interaction between microplastic particles and marine ecosystems. The authors urged policymakers and consumers to take proactive actions focusing on measures that can stop the plastics from intruding and polluting the ocean.

The study has been published in the journal Environmental Science and Pollution Research and was funded by the Department of Science and Technology under the PURSE II scheme. (India Science Wire)