Migration, Migrants and the Right to the City

City has emerged as a site of capital accumulation and wealth creation leading to inequality and deprivation not only within the city, but also outside, as it sucks the resources from the hinterland with little trickle down in return.

All of us know what has happened during the last week of April to the first week of June 2020 in response to the nationwide lockdown to stave off COVID-19 pandemic. 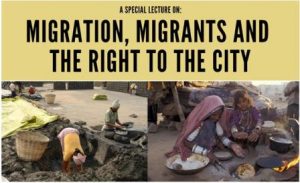 Suddenly millions of migrant workers started moving out of the city and marched towards their respective rural destinations.

The topics of migration and migrants have come to the centre stage of national policy making discourse and also generated a renewed academic interest. We are aware of the problems faced by the migrants, who have not been treated well, and a question is being raised whether they are the citizens of this country or not?  Whether they belong to the state of origin, or the state of destination or they are the responsibility of Central Government? We have also seen the matter being seized by the Supreme Court, and the apex court has given directions to the Central and state governments to facilitate transfer of migrants to their native places.

The question is why this magnitude of humanitarian crisis of migrants’ exodus occurred at the first place, and how academically we can understand the problem locating the relationship between migrants, migration and city. Migrants and migration are two separate terms, and conceptually it is necessary to distinguish between the two because it has implications in policy making. When we look at our Constitution, the Right to Move is a fundamental right under Article 19. Hence, there is no question of debating on whether migration is good or bad because it is an inalienable right of the citizens of this country. On the other hand, policy and programmes should focus on migrants’ vulnerability and violation of their rights. We need to look at some of the important questions such as on migrant’s rights, way they are treated, and whether they are included in various policies, programmes and legislations.

India has numerous social protection programmes and legislations, but the category of migrants does not figure in most of them except The Inter-State Migrant Workmen (Regulation of Employment and Conditions of Service) Act 1979, which specifies responsibility of contractors with regards to inter-state migrant labour. The Act is largely applicable to contractor-driven migration across state borders. It is by and large ineffective because of informal nature of contractors. Much of migration to urban areas is driven by social network of friends, relatives and kins. They are not covered under the Act of 1979. On the other hand, the rural employment generation programmes under the Mahatma Gandhi National Rural Employment Guarantee Act (MGNREGA) mentions that it is designed to prevent rural to urban migration. However, most of social security programmes or legislative acts are silent about migrants and migrant labour.

In some parts of the country, there is a wide spread agrarian distress, but not all people have means and opportunity to migrate.

Also Read : Migrant Workers from the Gulf: An Exodus that Can’t be Downplayed

Migration by and large is associated with some agency and is largely network driven. However, it is possible that the distress of the households may be a reason of forced migration and this is an area where legislation and policy making need to be concerned. The rural to urban migration, however, is largely the result of voluntary action. Therefore, this is a domain of development policy rather than a domain of law and governance.

As rural to urban migration is mostly a city-ward migration, it is important to clarify what do we mean by a city or how we understand a city?  A city is basically a relationship between people and place. People are making the place and changing the place. When a place acquires some level of concentration of economic activities and also concentration of people, we categorise some places as urban and some urban places as city. Thus, city is a form of relationship between place and people, and people are a necessary part of it. But what is happening from last few decades is that we see an increasing disconnect between people and place making an entire city just another space. In other words, city as a place is replaced by space. The city space produced seems to be in a concrete and built form, and has become somewhat a commodity or just a product of consumption. It has emerged as a site of capital accumulation and wealth creation leading to inequality and deprivation not only within the city, but also outside as cities are sucking the resources from the hinterland with little trickle down in return. 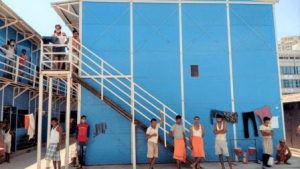 This has led to increased rural–urban divide in India along with widening regional disparity in the country. This is how the disconnect between people and place has manifested raising questions of Right to the City?

As people have been disconnected with place, the question is how to restore people with place? The Right to the City is an urban imagination about how we can make and remake city. It envisions a city that is inclusive, sustainable and people centric. Migration is central to the constitution of people in a city. In this talk, I would also like to put before you the relationship between city and development and the economic and political process affecting migrant labour and their rights.

If we look at the role of the city or urbanisation in the past, it has played a historical role in shaping polity and economic development.

Historians have noted that the Indus Valley Civilisation was an urban civilisation. We have Greek city states where cities and their residents played an important role in the political process. In our country also, during the same time around 6th century BC, there were several Janapadas, in the Gangetic Valley and some of the Janpadas were also characterised as Gansangha or Ganrajya meaning thereby republic. These were more or less similar to Greek city states. Later Janapadas grew into Mahajanapadas. Magadha was the largest Mahajanpadas among the 16 mentioned in Buddhist literature, with Patliputra its capital. Although the form of the city was different due to the level of technology and economy,its function as a political, administrative and commercial centre was fairly evident.

When we look at the Greek cities, there were three groups of people-citizen, metics (migrant), and slaves.  It is worthwhile to mention that the Greek word for the city is polis, and for citizen it is polites. Citizens were those freemen who were involved in ruling excluding women, slaves and metics. So, there is very close connection between a city and citizens. It also highlights the fact that cities played an important role in the development of political organisation. However, with the advent of industrialisation, cities have grown not only in their population size, but also as centres of massive economic and political power. In this context then, the cities as emerged in the Western European countries have been our role models. How have these cities evolved? What role has migration played? It is now obvious that cities of developing countries like in India follow a very different trajectory, and so far the role of migration is concerned with huge implication for migrants’ inclusion in the city. When industrialisation took place in the middle of the 18th century in Western Europe, there was a massive rural to urban migration. Not only migration took place within the country, but also huge emigration to their colonies happened. The rural by and large disappeared, agriculture was mechanised and there was no rural or agrarian distress as we see in different parts of India today. Although still a huge rural to urban migration is taking place in India, it has not been able to transfer the entire surplus labour from rural areas. On the other hand, rural areas in India are also growing demographically unlike the West European countries when they were in similar stages of urban transition.

(This is the first part of the excerpts of the Special Lecture delivered by Prof R.B. Bhagat at the Centre for Work and Welfare (CWW), Impact and Policy Research Institute (IMPRI), New Delhi).