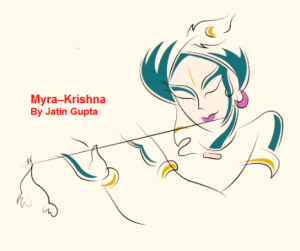 A magician in symphony of flute

Krishna… the crown with peacock’s feather

A wizard who creates and devastates altogether

The God of religious rejuvenation

Maa took me to his temple

A temple with placid musical vibes

A temple with his so-called dancing wives

Their faces were calm but movements were vigorous

Their love for Krishna was pure and mysterious

That night I saw a nightmare

Beasts full of lust were roaming here and there

But then he came and took away all my fears

I just saw his magnificent silhouette

It was enough to make me his devotee

That night this Myra broke all the laws

And got married to supremo Shri Krishna

My father gave me in a treaty

My devotion for Krishna was still the same

All days I just took his name

The emperor died in a war, but I was at peace

This world looked at me as widow, but I was wife of an immortal Devashish

I was forced to embrace the fire

But I chose to dance in Krishna’s empire

Poison became elixir, I could walk on water like land

When it comes to Krishna even snakes become garland

Protection of Krishna was always with me

But his love… he kept vindicating

All I wanted was him

I wanted my sire to fulfill my desires

This longing ignites the inner fire

And tonight this Myra… your so-called wife will dance

I’ll dance until these anklets are torn apart

I’ll dance until you accept my heart

I’ll dance until this so-called wife becomes your heart…

I’ll dance until this so-called wife becomes your heart…

A poetic programmer born and brought up in Punjab, Jatin Gupta is a poet currently based in Gujarat. He can be reached
@itsmejatingupta