Hydrochar derived from orange peels as a catalyst to convert biomass-derived chemicals into biofuel precursors.

Researchers at the Indian Institute of Technology (IIT) Mandi, have used hydrochar derived from 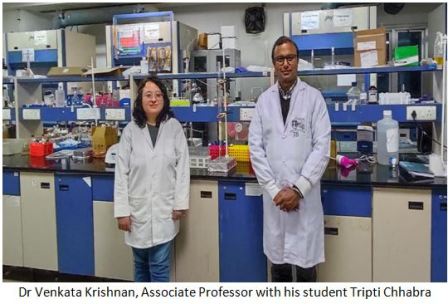 orange peels as a catalyst to convert biomass-derived chemicals into biofuel precursors. The research will help develop biomass-based fuel to overcome the socio-political instabilities associated with dwindling petroleum reserves.

Biomass-derived products from naturally occurring materials are currently the fourth most significant energy source that can meet the energy demand after coal, oil, and natural gas in the country. Lignocellulosic biomass obtained from forestry and agricultural waste, for example, can potentially be converted to a variety of valuable chemicals by various methods. Of these methods, the use of catalysts for the conversion is particularly useful because such processes can be carried out with minimal energy input. The type of product obtained from the biomass can be controlled through the right choice of catalysts and reaction conditions.

“One of the driving interests among the renewable energy community is the development of relatively clean and energy-efficient processes to convert biomass into useful chemicals, including fuel”, lead researcher Dr Venkata Krishnan said. “We were able to synthesize the biofuel precursors under solventless and low-temperature conditions, which decreases the overall cost of the process and also makes it environment-friendly, attractive from an industry point of view”, added Dr Krishna.

The most uncomplicated and low-cost catalyst that the researchers have studied for biomass conversion reactions is hydrochar. It is typically obtained by heating the biomass waste (orange peels in this case) in water through the hydrothermal carbonization process. The use of hydrochar as a catalyst for biomass conversion is attractive because it is renewable, and its chemical and physical structure can be altered for better catalytic efficiencies.

The researchers have used hydrochar derived from orange peels to catalyze the conversion of biomass-derived chemicals into biofuel precursors. For many hours, they heated dried orange peel powder with citric acid under pressure in a hydrothermal reactor (a lab-level “pressure cooker”).  The produced hydrochar was produced was then treated with other chemicals to introduce acidic sulfonic, phosphate and nitrate functional groups.

“We used these three types of catalyst to bring about hydroxyalkylation alkylation (HAA) reactions between 2-methyl furan and furfural, compounds that are derived from lignocellulose, to produce fuel precursors,” explains Tripti Chhabra, the co-author of the study. The scientists found that the sulfonic functionalized hydrochar catalyst was able to catalyze this reaction effectively, to produce biofuel precursors in good yield.

This is the first comparative study in which the three types of acid functionalization have been assessed. The researchers also performed green metric calculations and Temperature Programmed Desorption (TPD) studies to gain deeper insights into the catalytic activity of sulfonic, nitrate, and phosphate functionalized hydrochar derived from orange peels.

The development of such catalysts for biomass conversion bodes well for the biofuel sector in the country. It is worth mentioning that India is already a pioneer in biomass-based power. In 2015, India announced its goal to achieve 15 GW of energy from biomass, small hydropower, and waste-to-energy plants. In five years, the country has already reached the 10 GW target of biomass power.

This study has been recently published in the journal ‘Green Chemistry’. The study was led by Dr Venkata Krishnan, Associate Professor, School of Basic Sciences, IIT Mandi, and co-authored by his students Tripti Chhabra and Prachi Dwivedi. (India Science Wire)