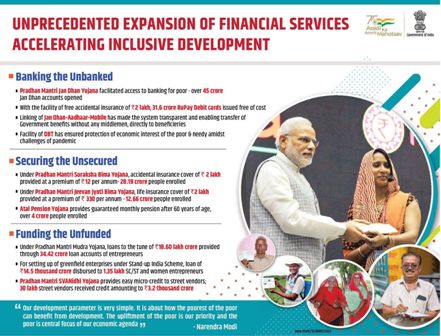 PMJJBY, PMSBY and APY were launched by Prime Minister Shri Narendra Modi on 9 May 2015 from Kolkata, West Bengal.

These three social security schemes are dedicated to the welfare of the citizens, recognising the need for securing human life from unforeseen risks/losses and financial uncertainties. To ensure that the people from the unorganised section of the country are financially secure, the Government launched two insurance schemes –Pradhan Mantri Jeevan Jyoti Bima Yojana (PMJJBY) and Pradhan Mantri Suraksha Bima Yojana (PMSBY); and introduced Atal Pension Yojana (APY) to cover the exigencies in the old age.

While the PMJJBY and PMSBY provide access to low-cost life/accidental insurance cover to the people, the APY provides an opportunity for saving in the present to get a regular pension in old age.

While celebrating the 7th anniversary of the Scheme, Union Minister of Finance & Corporate Affairs Smt. Nirmala Sitharaman said, “One of the main objectives under the National Mission for Financial Inclusion announced by the Hon’ble Prime Minister on August 15, 2014, was to expand the coverage of insurance and pension to provide the poor and marginalised sections of the society the much-needed financial security through affordable products.”

“The three Jan Suraksha schemes have brought the common person’s insurance and pension within reach. The number of people who have enrolled and benefitted from the above schemes over the last seven years is a testimony to their success. These low-cost insurance schemes and the guaranteed pension scheme ensure that financial security, which was available to a select few earlier, is now reaching the last person of the society,” the Finance Minister said.

Giving an overview of providing facilities to the poor, the Finance Minister said, “Today, even the poorest of the poor can have a life insurance cover for Rs 2 lakh at less than 1 rupee a day under PMJJBY and accident insurance of Rs 2 lakh at less than 1 rupee a month under PMSBY. All the citizens of the country in the age group 18 to 40 can subscribe to receiving a pension after the age of 60 by paying a minimum of Rs 42 per month.”

They provided security with convenience to citizens through PMJJBY, especially during the COVID-19 Pandemic, Smt. Sitharaman said, “Under PMJJBY, 12.76 crore persons have enrolled since inception for life cover and families of 5,76,121 have received claims for Rs. 11,522 crores under the scheme. The scheme has proved extremely useful for low-income households during the pandemic, as in FY21, almost 50% of claims paid out were due to COVID-19 deaths. Major changes were brought in the claim settlement process for quick and easy settlement of claims during the pandemic. These changes brought in for easy settlement of claims are continuing. Since the pandemic’s beginning, i.e., April 1, 2020, till February 23, 2022, a total of 2.10 lakh claims amounting to Rs 4,194.28 crore were paid with a settlement rate of 99.72%.”

The Finance Minister said that in a similar spirit, “28.37 crore people have enrolled for accident cover since the launch of PMSBY and an amount of Rs 1,930 crore has been paid towards 97,227 claims. More than four crore people have already subscribed to the APY scheme.”

On this occasion, Union Minister of State (MoS) for Finance Dr. Bhagwat Kishanrao Karad said, “On this 7th anniversary of these schemes, I congratulate all the banks and insurance companies for the successful implementation of these schemes and request them to continue working with same zeal and dedication till the last person is covered.”

“Going ahead, as announced by the Hon’ble PM in this regard on his last Independence Day address, we will endeavour to ensure that every eligible person in the country is covered under these social security schemes for insurance and pension,” Dr Karad stated.

As we celebrate the seventh anniversary of PMJJBY, PMSBY and APY, let us look at the features and glance over their achievements so far.

Scheme: PMJJBY is a one-year life insurance scheme renewable from year to year, offering death coverage for any reason.

Eligibility: Individuals aged 18-50 years with a savings bank or a post office account can enroll under the scheme. Before completing 50 years of age, people who join the scheme can continue to have the risk of life cover up to 55 years upon payment of the premium.

Benefits: Life cover of Rs. 2 Lakh in case of death due to any reason against a premium of Rs. 330/- per annum.

Enrolment: Enrolments under the scheme can be done by visiting the branch/ BC point or website of the account holder’s bank or at the post office in case of a post office savings bank account. The premium under the scheme is auto-debited every year from the subscriber’s bank account based on a one-time mandate from the account holder. The scheme and the forms (in Hindi, English and Regional languages) are available at https://jansuraksha.gov.in.

Scheme: PMSBY is a one-year accidental insurance scheme renewable from year to year, offering coverage for death or disability due to accident.

Eligibility: Individuals aged 18-70 years with a savings bank or a post office account can enroll under the scheme.

Enrolment: Enrolment under the scheme can be done by visiting the branch/ BC point or website of the account holder’s bank or at the post office in case of a post office savings bank account. The premium under the scheme is auto-debited every year from the subscriber’s bank account based on a one-time mandate from the account holder. Detailed information about the scheme and the forms (in Hindi, English and Regional languages) are available at https://jansuraksha.gov.in.

Background: The Atal Pension Yojana (APY) was launched to create a universal social security system for all Indians, especially the poor, underprivileged, and unorganised sector workers. The government’s initiative is to provide financial security and cover future difficulties for the people in the unorganized sector. APY is administered by Pension Fund Regulatory and Development Authority (PFRDA) under the overall administrative and institutional architecture of the National Pension System (NPS).

Eligibility: APY is open to all bank account holders aged 18 to 40 years, and the contributions differ based on the chosen pension amount.

In case of premature death of Subscriber (death before 60 years of age), the subscriber’s spouse can continue contributing to the APY account of the subscriber, for the remaining vesting period till the original subscriber has attained the age of 60 years.

Contribution by Central Government: The minimum pension would be guaranteed by the Government, i.e., if the accumulated corpus based on contributions earns a lower than estimated return on investment and is inadequate to provide the minimum guaranteed pension, the Central Government would fund such inadequacy. Alternatively, if the returns on investment are higher, the subscribers would get enhanced pensionary benefits.

Payment frequency: Subscribers can make contributions to APY on a monthly/quarterly/half-yearly basis.

Withdrawal from the Scheme: Subscribers can voluntarily exit from APY subject to certain conditions, on deduction of Government co-contribution and return/interest thereon.

Achievements: As of 27.04.2022, more than four crore individuals have subscribed to the scheme.