Uttar Pradesh, the state with the highest enrollment in higher education, has 49.1% male and 50.9% female students. 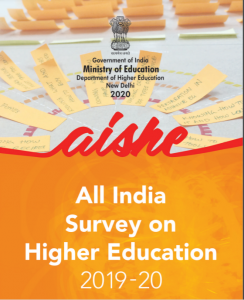 Report 2019-20 on Thursday, which revealed that there has been an 11.4% increase in student enrolment in higher education between 2015 and 2019. It also hinted at a rise in female enrolment and increased participation of students from underprivileged backgrounds.

A prominent highlight of the report is that female participation in higher education has risen by 18.3%. This has also resulted in a decreased gender gap in education. Figures from the 2019-20 survey reveal the presence of 96 female students per 100 male students. Females this year made up 48% of the enrollment into higher education.

Students from the Scheduled castes constitute 14.7%, while those from Scheduled Tribes make up 5.6% of the total enrollment numbers. The survey also revealed that 37% of the students belong to Other Backward Castes, while 5.5% belong to the Muslim minority group.

Secretary, Higher Education, Amit Khare said, “This report is tenth in the series of AISHE annually released by the Department of Higher Education. The continuous rise in the enrolment, number of institutions, gender parity is a part of our country’s major move towards improving access, equity and quality in light of National Education Policy 2020.” 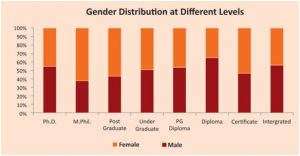 The ratio of male to female students at each level in the figure above shows that the percentage share of males is higher than females in almost every level, except M.Phil., Post Graduate, and Certificate courses. The PhD level has 55% males and 45% females. The gap is similar in intermediate courses.

College density, or. the number of colleges per lakh eligible population, in the age-group 18-23 years varies from 7 in Bihar to 59 in Karnataka as compared to all India average of 30. Total enrollment in higher education has been estimated to be 38.5 million- 19.6 million men and 18.9 million women.

Some key points of the report are as follows:

-Uttar Pradesh has the highest enrollment, followed by Maharashtra and Tamil Nadu

-Students from the Scheduled Tribes only make up 5.6% of the total enrollment. 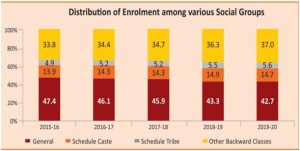 -The highest number of students (20.7 lakh) have graduated with a degree in Arts courses.

-The share of PhD students is highest in State Public Universities, followed by Institutes of National Importance.

-The share of female students is lowest in Institutions of National Importance followed by Deemed University-Government, State Private University.

The survey also reported that even with a 5.5% enrolment rate, more Muslim women are involved in higher education than Muslim males.

The information in the AISHE report was collected from all institutions of higher education, broadly categorized in three categories: University, College and stand-alone Institution, that are registered on AISHE portal. The actual response was received from 95.2%, 90.0% and 73.3% of these categories, respectively.

New Drug for Coronary Diseases Could be in Offing

Exide Reaches Out to Covid Warriors in City