Spanish Thriller ‘The Preacher’ at IFFI 52

The movie which was shot in Spain mostly, is a joint collaboration by Ecuador, Spain and Columbia. 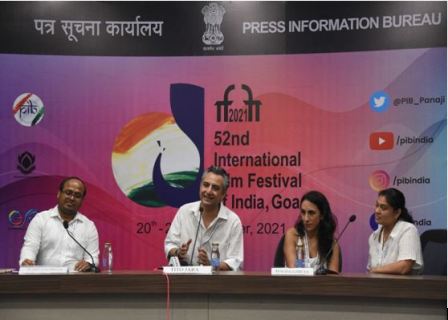 and scamsters. It is story of intrigue and fanaticism, in a city in which professed faith mixes well with corruption and fraud.

Through this film I have been trying to invite the attention of the people to a subject which has universal appeal: These were the words by Tito Jara, director of the IFFI 52 World Premiere film. He was having an interaction with media on the side-lines of the 52nd International Film Festival of India, being held in Goa. Jara was joined by Producer Magda Grace in the media interaction.

“Since being a believer myself, my movie is not against any religion, but those dark elements who are playing with the lives and emotions of innocent people whose only fault is that they seek miracles in despair when they run out of hope,” the Director said.

Adding that religion is an easy subject to take offence to, Jara explained, “We are not trying to create any controversy with this film. My movie is against the people who take advantage in the name of religion.”

“I understand that people are sensitive about religion, but I believe we can have a nice conversation on the subject,” Jara said expressing hope.

The film, based on real life events, tries to portray the story of a little girl who is being used by a swindler by making people believe that she is a “blessed one” who can heal sick and give solace to troubled minds.

“During the course of the making of the film which took me 9 years, I have met many such miracle makers and swindlers. This movie is real account of what is happening in my country,” said Jara who is from Ecuador.

Asserting that such types of preachers, scamsters and organised gangs can be found in any part of the world, Jara said that he believes this movie will pave way for some different views and discussions on the subject. “I want people to ask among themselves, how as a human one can do such things to people who are innocent believers,” he exhorts.

The movie which was shot in Spain mostly, is a joint collaboration by Ecuador, Spain and Columbia.

Expressing happiness over having the film’s world premiere at IFFI, Jara, who is also the Writer, Editor and Producer of the film, said that the experience had been really amazing. “I feel very humbled to be here. It is quite unbelievable for me. I am so happy that the movie is well appreciated by the audience.”