Deadpool nails it, again. Deadpool 2 pushed the limits even more than we expect.

oing through the gurney of Marvel Studio releases has made the regular moviebuff, not a fan, tired. Just movie after movie, with the same characters fighting different, or the same, characters. It is seemingly impossible to think that they have one more movie coming out. And along came Deadpool, again, to save the day.

The first Chimichanga of the Deadpool universe proved to us the limits for superhero flicks were beyond a few funny quips. There was outright profanity, relatable wry humour and clever delivery. Everything that makes up a Ricky Gervais or a Russel Peters comic set to click its audience to laughter that hurts.

The entire movie was perfectly packaged to launch Deadpool, and Ryan Reynolds, as a great superhero who could also be the funny guy in your circle, or Chandler Bing. 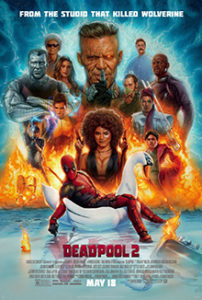 Deadpool 2 pushed the limits even more than we expect. The template from Marvel’s humour palette could just be from here. This one just hit the ball right out of the park. The movie is just everything made solely and solely to entertain. The makers have played no holds barred with the movie just as they did with the marketing. And the audience reacted exactly how they wanted them to.

First off, the plot is simple. The superhero genre has already seen many of this type. The movie begins where its prequel ends.  Hero goes on with life, witnesses tragedy, tries to save person in distress, villain from the future so on and so forth. Typical Marvel stuff. But what makes it stand out is the heavily humorous writing. The layered jokes, pop culture references (especially the answer to the question ‘who are you?’) and wicked one liners were laugh worthy. The writers, Reynolds, Wernick and Reitch, did an amazing job in converting the script to a dark, wicked and witty piece of writing.

Directed by ‘the guy who killed the dog in John Wick’ David Leitch, the movie is made paced fast and gritty. The cinematography and editing add value to this. Although some scenes were just over the top on gore and disgust the entertainment was not missed. Reynolds nails it in what he does best. Josh Brolin plays his second outing as a Marvel villain.

It will be a riot if this one meets Thanos . The supporting cast give very convincing and apt performances to support the script and carry the movie forward.

This was the second time around Chimichangas came around the corner. They were made with the right flavours, ingredients and a tad bit extra zing. But nevertheless, it was absolutely entertaining. Especially the post credit scenes where Reynolds does everything correctly giving us hope for him to be and stay a superhero.