The tender power of young coconut

Twenty years ago, Mohini Sharma used to drive three kilometres to buy a couple of raw coconuts for her child 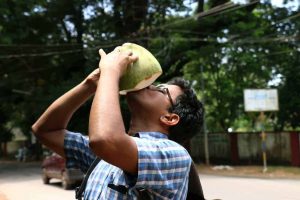 whenever he had diarrhoea. “Tender coconut was hardly available in north India then,” says the 45-year-old homemaker, a resident of east Delhi’s Mayur Vihar. Today, her son is 23. A lawyer by profession and a fitness freak, he loves tender coconut water. “It is his favourite ‘Cold Drink’,” says the mother. “Unlike in the past now we do not even need to step out of our house to get raw coconuts.” When the online supermarket that delivers the bulky green coconuts, home is out of stock, Sharma buys them from the coconut thela (cart)-seller who does daily rounds of their colony.

From the backyards of south and west India to the homes, wellness centres and grocery stores of the north, the green coconut has, indeed, made a big leap. Its spiralling popularity also indicates a high jump in the health awareness levels of the common people.

Earlier, Tender Coconut Water (TCW) was largely seen as a cooling, summer drink but today it is in high demand throughout the year. Until five years ago, Mohd. Aslam, a roadside vendor in south Delhi, used to set up a stall only from March to September, but now he runs it all year. He has even hired a help for home delivery of raw coconuts in the neighbouring residences. Other than the fact that TCW) is “cooling” and “good for health”, and that doctors have been recommending it since India was hit by the coronavirus, Aslam, like many other sellers and buyers, does not know much about it. This is in sharp contrast to the consumers in the coastal areas where every household knows TCW as a rehydration therapy for fever and diarrhoea, even safe for infants.

The common knowledge is based on tradition and first-hand experience, but does science validate it? The answer is a big “Yes”. Quoting medical studies, S R Priya and Lalita Ramaswamy of the Nutrition and Dietetics Department of the College of Arts, Coimbatore, laud TCW. In a research paper titled ‘Nature’s Elixir to Mankind’ (2014, published in International Journal of Recent Scientific Research), the authors say, “TCW is composed of both organic and inorganic compounds which play a vital role in aiding the human body antioxidant system; its inorganic ions are required for normal cellular function and are critical for enzyme activation, bone formation, haemoglobin function, gene expression, and the metabolism of amino acids, lipids and carbohydrates.” “These ions contribute to the therapeutic value inherent in coconut water,” the paper says, adding that “this basic ion composition of coconut can replenish the electrolytes of the human body excreted through sweat such as sodium, potassium, magnesium, and calcium.”

The Coconut Development Board of India endorses TCW for at least a dozen health problems, including kidney stones, intestinal worms, urinary infections, and oral rehydration during cholera.

The authors, however, advise caution to those suffering from hypertension: “Coconut water might decrease blood pressure, and taking coconut water along with medications for high blood pressure might cause the blood pressure to go too low.” The paper recommends that hypertensive people “consume it carefully and in consultation with the cardiologist.”

Described as a “Life Fluid” comparable to human plasma, TCW has also been used successfully as intravenous (IV) fluid, of course, by default and in emergencies. TCW is reported to have been used during World War II, both by the British in Sri Lanka and the Japanese in Sumatra. Although disregarded by many as “Fiction”, these stories spurred scientific curiosity. Research on whether TCW can, indeed, substitute IV fluid dates back to the 1940s.

According to Dr Karl Kruszelnicki, one of ‘Australia’s 100 National Living Treasures’ and author of 45 books, medical literature confirms the experiments.  In an article in ABC Science (2014), he listed three of them: Dr Pradera in Havana, Cuba, injected one to two litres of filtered TCW/ 24 hours into the veins of 12 children, reporting no adverse reaction; In 1954, three doctors–Eisman, Lozano, and Hager—from Thailand, the USA, and Honduras, combined the findings from their research after feeding TCW intravenously to 157 patients, the majority, 136, in Honduras. Out of 157, 11 or seven percent had reactions, including fever, itchiness, headache, and tingling in the hands.

The third case is that of a man in the remote Solomon Islands, who had suffered a stroke and could not swallow the liquid and solid food. He was rehydrated with regular IV fluids through a tube directly into his stomach for 36 days but became intolerant to it. Meanwhile, the hospital ran out of IV; the doctor infused two and a half litres of coconut water into the patient over two days. The patient recovered the ability to swallow and was discharged from the hospital on day 39.

The bottom line, says the Australian expert, is that TCW is similar but not identical to human plasma although it can (and has been) used as a substitute in an emergency. The debate about whether TCW can be a substitute for IV fluids has also invited witty comments from writers: “You can rest assure that no hospital anywhere is going to stop ordering IV fluids and start picking coconuts,” said culinarylores.com in a 2017 post, while acknowledging the emergency uses of TCW.

The high demand for TCW has also given an impetus to research on the best ways to preserve the natural flavour and properties of coconut water. According to the ICJ research paper by Sunil L. and others, the authors experimented on the preservation of fresh coconut water. Kept in glass bottles at minus 20 to two degrees centigrade, TCW tasted and smelt the same as the original for two to three months. They also refer to a list of the top bodies, including the CSIR-CFTRI and the DRDO-Defence Food Research Laboratory, both in Mysuru, that have been conducting research on packaging TWC. The official emphasis on such research and the popularity of TWC among the well-off notwithstanding, it is too expensive for the common folk, especially in non-coastal areas.

The spurt in demand in recent years has also meant a big jump in the price of fresh TCW. Until recently, it was available for 15 rupees in the states growing it, and for 25-30 rupees in the non-growing states. Today, the price is 55-65 rupees in north India. The vendors in Delhi and its suburbs have been selling it for 50 rupees since the beginning of this year, and the price stayed at 80 rupees for a month during the second wave of the corona pandemic. That was because some social media sites were giving ‘expert’ advice that “Eight glasses of TCW a day fight corona away” and people were reported to be consuming it without any concern for the side effects, which can be especially serious for hypertensive people.

The hype around TCW is, however, neither new nor exclusive to India. In the U.S., it has been projected as the best sports drink for years. Doctors are not, however, falling for this marketing propaganda. “If you enjoy the taste and your budget allows it, coconut water is a nutritious and relatively low-calorie way to add potassium to your diet and keep you well-hydrated,” says Director of Nutrition at Web MD Kathleen Zelman, clinically.

Most doctors and dieticians would gladly let her have the last word.

The writer is a senior journalist, based in Delhi