The recent developments in the Indo-Sino relations have paved way for many questions and expectations from leaders around the globe; however, establishing an environment of cooperation has been a constant struggle.

In the past four months of the year, India – China relations have witnessed high level diplomatic exchanges at a frequency probably like never before. Starting with Foreign Secretary Vijay Gokhle’s visit to China in January 2018, and now reaching its highest point with the informal Summit between the Prime Minister, Modi and the President, Xi scheduled for 27th and 28th April in the Chinese city of Wuhan. These diplomatic engagements and the upcoming Summit is looked on from a ‘binocular lens’ with much anticipation and expectation by many scholars, analysts, strategists, corporates and above all, many world leaders. Thus, it is of no surprise when Chinese President Xi, during BRICS Summit, 2014 said, “When India and China meet, the world watches us.” 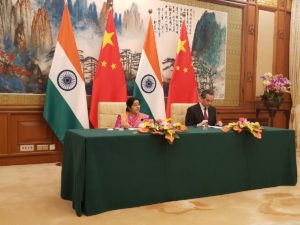 The New Delhi – Beijing  relationship have been an interesting one, woven together by the hard work of many diplomats, corporates and leaders on both sides who would claim it to be a beautiful symphony of high notes and low notes. On one hand, the relationship can be characterised by mutual suspicion and expansionist behaviours at frequent intervals, while on the other hand, it can also be lauded for the significant boost in the Asian economy in the past many decades.

The Modi- Xi era has been an interesting chronicle in itself. In September 2014, just months after PM Modi came to power, he hosted President Xi in his home state in Gujarat. Days later, Chinese troops were reported to have invaded into Ladakh’s Chumar sector, although this issue was resolved. Further in 2015, President Xi hosted PM Modi in his hometown in the Chinese city, Xian and later in Ufa, Russia on the sidelines of Shanghai Cooperation Organisation (SCO) Summit. In 2016, India is let down by Chinese opposition to its entry into Nuclear Suppliers Group (NSG) and later in October, Modi and Xi met on the sidelines of BRICS summit in Goa.

“Since a number of issues beset the bilateral ties- such as the unresolved territorial dispute, concerns on Tibet, China-Pakistan ties, Indian Ocean and beyond- the two leaders are likely to explore ‘out of the box’ solutions to move forward. It is likely that they will emphasize more on ‘doable’ issues such as on border CBMs, infrastructure projects, education and health and expand cultural ties.” Srikanth Kondapalli, Professor in Chinese Studies, JNU.

The year 2017 has been a notable year for the neighbouring nations, one that fired the flame to the existing mutual suspicion and distrust. Beginning with India boycotting the Chinese Project of ‘One Belt and One Road initiative (OBOR) objecting the China – Pakistan Economic Corridor, which is a part of the OBOR and runs through Pakistan occupied Kashmir (PoK). In the month of June, Indian Army intercepted road building by the Chinese side in Doklam, which is a territory in dispute between Bhutan and China. This resulted in almost two and a half months of military standoffs between India and China.  Although the withdrawal happened just in time before the BRICS summit in China, this episode hit hard on the relations between the two nations. In November, India decided to join the Quadrilateral Security Dialogue (Quad), which is a strategic engagement between the United States, Japan, Australia and India with a naval component. The Diplomat has reported that Beijing opposed Quad as it saw it as a “potential anti- Chinese alliance of democracies aimed at containing it.”  Further, India was let down by constant Chinese opposition to international consensus on the prohibition of the terrorist Masood Azhar.

Both the states have to constantly work on their relationship with more enhanced structures of communication and transparency leading to mutual trust rather than constant rhetoric passed by top officials on both sides that bring glitches the relationship. For example, in the 2016 Report of the US-China Economic and Security Review Commission, the former Indian Foreign Secretary S Jaishankar was reported saying, “Those who are resident in this region have the primary responsibility for peace stability and prosperity in the Indian Ocean.” Hence, in what seemed like a retort, the Chinese Foreign Ministry argued, “in the globalized era, the security of the Indian Ocean is in the common interest of all countries.”  Further, the  China Daily wrote: “India alone cannot assure the security of the Indian Ocean, even if it regards the Indian Ocean as its backyard and wishes no one to compete with it there…If the Pacific is big enough to accommodate China and the US, so is the Indian Ocean to accommodate India and China.”

Further, it is natural for India to view Chinese OBOR as its expansionist policy as former Deputy National Security Advisor, Satish Chandra said, “China’s quest for Asian supremacy do not give countenance to multi-polarity in Asia.”

Also, the 2016 Report claims it seen as “designed to advance a web of interrelated military, economic, diplomatic, and energy security-related initiatives and objectives” OBOR, combined with increased deployment of the Chinese forces in the Indian Ocean. These could have “revived Indian fears about Chinese encirclement and a neo-‘String of Pearls’.” Possibly such fear could be the cause for military intervention at Doklam. However, could this standoff been avoided through effective diplomacy rather than through military intervention?

Being neighbours, the only possibility of survival is to peacefully co- exist, considering that fact that the two countries are big Asian powers, both politically and economically. Hence, as in the past, the way forward can only be cooperation, mutual trust based transparency and communication and a lifelong friendship between the  nations which can have enduring impacts on the growing status of the Asian continent.

The writer, a defence policy researcher, holds a Masters in International Studies and Diplomacy from SOAS, University of London. She can be reached on twitter @connectwidtessa

From Muthanga to Madhu:The plight of Adivasi communities in Kerala