Will the Congress return to power with Paper Ballot?

The INC has called in for revocation of paper ballot in polls especially in the forthcoming 2019 General Elections. The ruling BJP also countered that it will consider the idea if there is a consensus among all the political parties in the country. 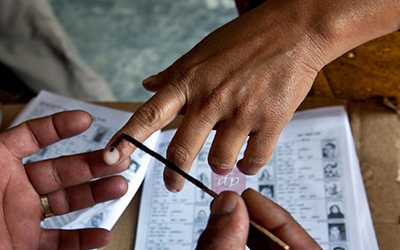 Electronic Voting Machines (EVMs) have been in use for the last two decades. Their integrity was never questioned until 2009, when allegations were raised for the first time over the tampering of the machines following the re-election of UPA.

Before that a few state level politicians had doubted their impartiality. Subramanian Swamy, who is now with the BJP, sued against the results in the SC, and the case is yet to find conclusion. Meanwhile, several opposition parties accused the BJP of deploying such tactics in the UP assembly elections. The EC had too challenged political parties to break the machines and compromise the polling results. No party tried that except Aam Aadmi Party and others, but without success. However, several western countries abandoned the system after numerous malpractices were proven. The EC in India continuously argues that it is full proof and no malpractice of pre-recorded chips can be installed in the machines. It is also accepted by many technocrats who are familiar with such technologies.

Moreover, the EC has brought in more transparency in polling with Voter-Verifier Paper Audit Trial (VVPAT), which provides voters with a printout of the list of candidates they have voted for.

So far VVPAT has not countered any opposition. In addition, the EC has to deploy 41 lakh units of VVPAT for the forthcoming 2019 General Elections with an expenditure of more than Rs 3,000 crore.

In this background, returning to paper ballot would be a cumbersome affair for the EC. The commission will have to grapple with numerous malpractices, booth-capturing and other such other poll-related violence. Poll-related violence in fact came down drastically in recent times due to changes in conducting free and fair poll by the EC. Code of conducts and other practices are strictly followed by state governments across the country, though show of money power and communal passions increased in recent times. Therefore, it is illogical to bring in paper ballot rather than making corrections in the current system.

With the results in favor of SP and RJD in recent by-elections to the Lok Sabha, the congress party sees its chance to retain power in the next year poll. What is doubtful is whether the challenges before the party have been taken into account. Because Congress has to take on the ruling BJP in states such as Haryana, Rajasthan, Gujarat, MP, Chhattisgarh, Uttarkhand, Jarkhand, Karnataka and some NEA states. It has to fight with CPI-M in Kerala, TRS in Telengana, PDP in J&K, with Akali in Punjab and other regional parties in a few other states. Altogether, it has to fight them in another 50 odd seats and hence it has straight fight based on its own strength in and around 200 seats. One positive aspect for the party is it still has equal size of vote share with the BJP; of course with 2-3 percent lagging behind. Will the re-introduction of paper ballot change this scenario? Is there any irrefutable proof to show that the party would perform better? Answers have to be made.

Anyway, winning all these 200 seats and another 72 seats with the help of alliance alone would give it absolute majority in the Lok Sabha. In between 1996-1998 the party had less than 150 seats, so it did not share power with other parties; it simply supported NF coalition from outside. It had 200-plus seats to govern the country under PV Narasimha Rao. He completed the term successfully owing to his own personal capability. Similarly the Congress had upper hand during the two terms of UPA: 2004 (145 against 138 of the BJP) to 2014 (206 seats against the BJP’s 116).

In his reaction, former CEC, T S Krishnamurthy has shown dissatisfaction over the demand. “Some countries have admired our system, and suddenly to withdraw it is a retrograde step” he said.

The present political situation in the country is that the Congress party cannot hope for any chances, especially in a political climate where the BJP continues to hog the limelight. Therefore, in what way paper ballot would help the Congress? Above all, the party had forfeited deposits in the UP and Bihar by-polls.Though it finds a place in the Mahagathbandhan (Grand Alliance) pre-poll alliance, does it look embarrassing as playing a junior partner in two big states? Besides these parties are traditionally anti-Congress. It is also noteworthy that the SP lost the state regime after entering into a pre-poll alliance with the Congress last year.

The Congress may be happy to see BJP’s defeats in the by-elections held since May 2014. The ruling party had in fact lost 10 seats and reduced to 274 in the Lok Sabha and just ahead two seats required for absolute majority. Similarly if we go through 2004 to 2014 Lok Sabha by-elections we find that the Congress had in fact won just 12 seats where more than 50 seats (according to data available with ECI portal) underwent electoral process. During UPA’s tenure,the Congress was calling the shots. But over time, the grand old party lost its influence, especially in states like Tamil Nadu, Andhra Pradesh, U.P. Bihar, Odisha, West Bengal and New Delhi, etc. As things stand today, the party cannot be expected to lead from the front during the Lok Sabha polls. Considering all the factors, the Congress better introspect before seeking any other reforms in the electoral system in future.

AFSPA: The Army vs Democracy