1.5 Million People Likely to Die Due to Extreme Heat

The new study warns that if greenhouse gas emissions continue to grow at current rates, India is projected to see a rapid increase in extremely hot days and high mortality risk.

Every year, summers get warmer and winters are late to arrive. Climate is changing and it has gained importance in the public discourse, and rightly so. But, even as the causes driving climate change are more or less understood, an understanding of its consequences is lacking.

The World Bank estimates that the impact of climate extremes on the poor is equivalent to a US$520 billion loss in annual consumption and forces about 26 million people into poverty, each year. Change in weather and temperature will have a large-scale negative impact on food production and food security as well. Despite advancements in agriculture, it is expected that global crop yield losses as large as 30 per cent by 2080 will occur. Moreover, water scarcity and low food security coupled with extreme weather events will aggravate the large-scale human migration and create climate refugees. Since 2008, an average of 21.7 million people has been displaced annually due to weather-related hazards. 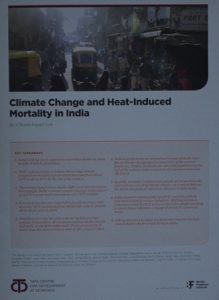 Without urgent action to address these risks, climate change could drive around 720 million people into extreme poverty between 2010 and 2050, generating irreversible damages to natural and human systems. Recognizing the need to mitigate the impact of a warming planet, global leaders gathered at the United Nations Climate Change Conference, Paris in 2015 and committed to ‘hold the increase in global average temperature to well-below 2°C above pre-industrial levels and pursue efforts to limit the temperature increase to 1.5°C above pre-industrial levels’. This requires that global emissions peak soon and declines by at least 50 per cent by 2050 from their 2000 levels. However, unfortunately, we are not showing any signs of slowing down. Already, the world has heated up by 0.85°C in the last century. The past three decades have consistently been warmer than the one before.

Recently, a new study ‘Climate Change and Heat-Induced Mortality in India’, conducted by the Climate Impact Lab in collaboration with the Tata Centre for Development at the University of Chicago, released at UChicago Center in Delhi. The study is the first in a series of findings estimating the human and economic costs of climate change and weather shocks in India. The study suggests that India will witness an increase in heat-induced mortality at about 60 deaths per 100,000 populations by the end of the century under the present scenario. At the launch of the study, Amir Jina, Assistant Professor at the Harris School of Public Policy, noted that ‘at least 2,500 deaths were caused by heatwaves in India in 2015’.

What’s worse is that, by the year 2100, around 1.5 million more people are projected to die each year as a result of climate change—a rate as high as the death rate from all infectious diseases in India.

The study also warns that with current emission levels, the average annual temperature in India is likely to rise by 4°C by 2100. This also means that the average number of extremely hot days—with a temperature higher than 35°C—will increase by more than eight times per year from 5.1 (in 2010) to 42.8 days annually. With the number of extremely hot days becoming more common, 16 out of 37states and union territories are predicted to become hotter than Punjab. Punjab is currently the hottest state in India with an average annual temperature of 32°C. Other states like Odisha, Haryana, Rajasthan, Uttar Pradesh, Bihar and Delhi are also likely to suffer more frequent heat waves and longer summers. Besides the social and economic costs of climate change, the study emphasizes the correlation between average summer temperature and mortality. Together, six states alone—Uttar Pradesh, Bihar, Rajasthan, Andhra Pradesh, Madhya Pradesh and Maharashtra—are responsible for more than 1.5 million deaths or about 64 per cent of total deaths caused due to temperature rise caused by climate change in India. 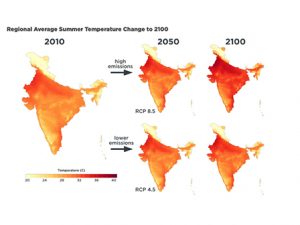 Commenting on the findings of the study, Kamal Kishore, Member of the National Disaster Management Authority (NDMA), said ‘these findings are a reminder that we have to keep making consolidated, long-term efforts to build resilience to extreme heat’. He also told the audience that the NDMA has been working since 2016 to improve early warning systems for better preparedness against heat waves at the local level. He also mentioned that NDMA is working with all heat-prone states to help strengthen their resilience against extreme heat.

The study was formally released by the Union Minister, Gajendra Singh Shekhawat, Ministry of Jal Shakti, and in his keynote address, he stated that the climate change is upon us. It is in the form of erratic monsoons, prolonged droughts and heatwaves and so on. All these exacerbate several problems that we are already grappling with, including water stress. In the light of new challenges, the minister stated that the government is taking a multi-pronged approaches like rejuvenation of traditional water bodies, talking about giving incentive to crops that are less water-intensive and also promoting participatory groundwater management and he hoped that all of which will help build India’s resilience to climate change. How effective these measures prove to be, only time will tell, but such measures alone will surely not be enough.

On the occasion of the launch of the study, Michael Greenstone, faculty director at the Tata Centre for Development and a co-founder of the Climate Impact Lab reminded the audience that ‘these findings make clear that the continued reliance on fossil fuels globally will greatly harm the well-being of Indians in the coming years and decades. They also underscore the need to find innovative adaptation strategies. This global energy challenge that requires countries to balance the need for inexpensive and reliable sources of energy that is critical for growth, while managing climate and air pollution risks are perhaps the defining challenges of our generation’.

Also Read : Revitalising Yamuna In Delhi Connecting With The People Who Matter

The study highlights that the National Capital is likely to face 22 times more extremely hot days and more than 23,000 climate-related deaths annually by 2100 under the continued high-emission scenario.

Indeed, climate change is the defining challenge of our generation. This is why young people across the globe are demanding concrete actions. We know what is wrong—our misguided use of natural resources and over-exploitation of consumer freedom. We also know that traditional solutions will not fix the problem and so, the question we need to find an answer to is ‘are political leaders ready for transformational change’. Can we expect the Indian government to respond with a firm policy action and plan for the inevitable crisis that lies ahead?

Justice Delivery: Maharashtra Tops while UP, Bihar at the Bottom