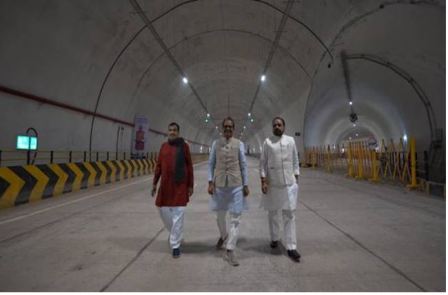 Addressing the gathering, Shri Gadkari said with the construction of the Churhat tunnel and bypass, the length between Rewa to Sidhi has decreased by 7 km. Now instead of two and a half hours, we will be able to cover this distance in 45 minutes. Also, he said it would take only 4 minutes to cross Mohania Ghat instead of 45 minutes.

The Minister said the tunnel’s construction would facilitate the movement of vehicles in the Rewa-Sidhi section, and white tigers, other wild animals and the entire forest ecosystem would be protected. With the construction of the Devtalab-Naigarhi road, the connectivity of Rewa district with Prayagraj and Varanasi will be easy.

Shri Gadkari said with the construction of the Satna-Bela four-lane road, and connectivity will become easier for the coal, cement and diamond industries in the region. He said with the construction of this route, the journey from Satna to Rewa can be completed in 40 minutes. Access to famous tourist places like Jhansi, Orchha, Khajuraho, Panna, and Satna will be easy. He added that farmers and other small entrepreneurs would have easy access to the market, saving time and fuel.

On this occasion, Shri Gadkari announced the widening of the Rewa-Sidhi road, approving the demand to make it four-lane. He also announced a 19 km long 2-lane bypass of Rewa to 4-lane. With the widening of this bypass, the connectivity of Prayagraj-Varanasi via Chorhat from Satna will be good, he said.

These twin tunnel made of NATM method meets each other in 300 meters, due to which there will be no hindrance in traffic. Due to the curved turn in the Mohania valley, there was a possibility of accidents with the long time taken by vehicles, which ended with the construction of this tunnel. State-of-the-art facilities like an exhaust fan, Optical Fiber Linear IT Detection System, fire system, control room, cameras, and phone facility at 200 meters have been provided in the tunnel.

This is India’s first Aqueduct, which has a tunnel below and Bansagar Canal above and the earlier road above it also built. A big and a small bridge, a ROB, an overpass, an underpass, 4 canal crossings, 11 box culverts and 20 culverts have been constructed in this tunnel.

The best Essay Writing Service To the Admission and Inspecting Pursuits