A Journey to the Andes Mountains

My trip to attend the International Conference on Climate Change gave me an opportunity to see the Andes Mountains in Huarez, Peru.

It was the last week of November 2017; I travelled to Huaraz, Peru, South America to attend an International Conference on ‘Climate Change.’ The conference was held between 29 November and 1 December, 2017. 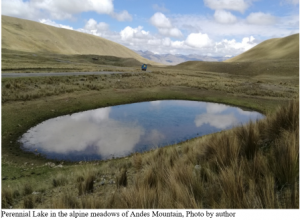 Because of a long-distance between Delhi and Lima, the capital city of Peru, I left Delhi on 27 November early in the morning. My first flight was to Amsterdam, Netherworlds. The flight from New Delhi to Amsterdam was about 7 hours long with about 12 hours transit at the Amsterdam airport. So, it was almost a 20-hour journey. The next morning, on 28 November, at 4 am, I had a flight to Lima from Amsterdam. It was a 12-hour unstopped and long journey. After an excruciating journey of 31 hours, being jetlagged, I could not turn in. While it was the winter season in India, Peru had the summer season because of its location in the Southern Hemisphere. Further, the time difference between India and Peru was about 10 hours and 30 minutes. I halted at Lima (154 m altitude) for a night. Although it was the summer season for Peru, the Lima climate was quite cold.

On the west coast of Peru, Peruvian cold current flows in the Pacific Ocean, originating from the southern pole and meeting with the equatorial hot current. Since Lima is located on the east coast of the Pacific Ocean, it is highly influenced by the Peruvian cold current. Peru has mainly two types of inhabitants – the indigenous people and the Spanish. A master’s student, who visited me at Lima airport, has a Spanish father and a native mother. Lima is a beautiful city. It has many churches in the core areas. It took me a whole day to visit Lima city. Peru is also known for the Machu Picchu ancient civilization.

The next morning, I left for Huaraz, a mountain town, situated on the lap of the Andes. It was an 8-hour journey by bus from Lima to Huaraz. The landscape between the two places is unique. First, the road goes along the coast of the Pacific Ocean on one side and on the other side lies the Sechura Desert (an extension of Atacama Desert), mountainous and rugged. Peru is the driest country of the world. It is a long belt of specific geographic features. After an almost 4-hour journey, I see some arable land with an existing maize crop. Maize is the staple food of Peruvians. The Andes mountainous region began after a 2-hour journey and continued for another two hours on the route to Huaraz. I reached Huaraz at about 5:00 pm (Peruvian time). The organizers took me to a hotel and after taking rest for a while, I went to the conference venue, which was in the conference hall of Huaraz Municipal Corporation building. Dinner was organized, and the main dishes were varieties of bread, coffee, and tea. Pork and beef were also served. I could not eat many items because of the tastes and slept with an empty stomach.

I got up early in the morning and went for a walk. The sky was clear and the climate was a little bit cold. When the sun rose, I saw the snow-clad mountain peaks of the Andes. Huaraz is a small and beautiful mountain town. The population size is small, and about 120000 people live in the town. Its altitude is about 3050 m. Because of its location in the equator, it remains open throughout the year. It is a wide valley. After the morning walk, at 10:00 am, I joined the inaugural session of the conference. The members of the organization committee welcomed me overwhelmingly. Most of the people speak Spanish or local languages, and it was difficult for me to understand them. However, an English translator was available. It was a very constructive and fruitful inaugural session.

I was hungry and went out to the city centre in quest for food. A colleague informed me about a restaurant where I 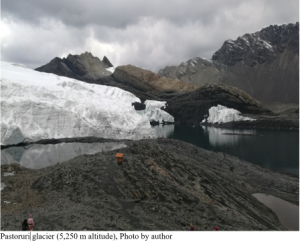 can eat some spicy food. I got pulses, curry, and rice; however the taste of the food was different. On the way, while coming back to the conference venue, I saw a woman selling boiled maize and quickly I bought two pieces. It was satisfactory. Again the problem was of eating dinner. Luckily, a delegate to the conference informed me that there is a restaurant, which cooks Indian and Asian food. It was a happy moment for me. I went to the restaurant alone. In the menu, I saw vegetarian curry and rice items and I ordered the same. It was too spicy and expensive. However, it gave me satisfaction. The Peruvians are humble and friendly. They love Indians. There are similarities in the Himalaya and Andes mountains in terms of natural landscapes. The Himalaya are the tallest mountains, whereas the Andes are the longest. Because of this connection, I got full affection and love from the native people of Peru, during the conference.

After the three-day conference, we had a field visit to the Pastoruri glacier of the Andes, which is situated at 5,250 m altitude. Early in the morning, we got on a luxury bus and travelled for about three hours. On the way, we stopped for breakfast. I could eat boiled maize only. The landscapes of the highlands of the Andes are spectacular. The Alpine grasslands are found after 4000 m altitude. There are numerous highland lakes on the way. They are perennial and glacial fed. The bus went to a certain distance and thereafter, we trekked about 5 km to reach Pastoruri glacier. We touched the snow line and the glacier, and stayed on the bank of a lake fed by the glacier for a while. It was 2 pm, and suddenly clouds covered the sky and snow occurred. The local people informed me that every day after 2:00 pm, snow occurred. I did not have sufficient warm clothes and finally, we all came back to the place where our bus was waiting. I ate boiled maize at the bus stop. At 5:00 pm we reached Huaraz town. The next morning, I came back to Lima and halted for a night. I had to travel to Delhi for a long distance. I had two transits – Panama City and Amsterdam.