Agnipath: A Game Changer for The Armed Forces

'Agniveers' are not only 'Surakshaveers' of Nation, but also 'Samriddhiveers' contributing to the Nation's prosperity: RM Raksha Mantri Shri Rajnath Singh.

Agnipath is a game-changer scheme for the Armed Forces, which will act as a force multiplier in 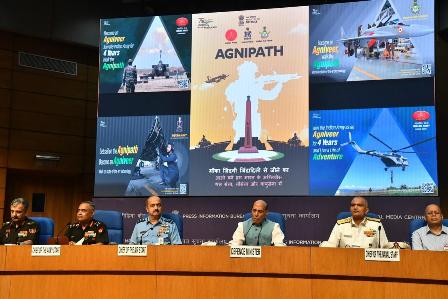 making the Indian military one of the best in the world with a youthful, high-tech and ultra-modern outlook. Raksha Mantri Shri Rajnath Singh stated this during his virtual address at the MoU Exchange Ceremony ‘Outreach Programme with Ministry of Education (MoE) & and Ministry of Skill Development and Entrepreneurship (MoSDE’) in New Delhi on January 03, 2023. He elaborated on the paradigm-shifting changes the Agnipath scheme will make in transforming the Armed Forces into a tech-savvy, well-equipped and combat-ready unit to face future challenges.

During the event, the Ministry of Defence (MoD), Ministry of Education (MoE), Ministry of Skill Development and Entrepreneurship (MoSDE) and all three Services signed/exchanged MoUs/ Agreements with various stakeholders to facilitate continued education of Agniveers while serving in the Armed Forces and award of appropriate skill certificates in accordance with their expertise/experience. Under these MoUs with the National Institute of Open School (NIOS) and Indira Gandhi National Open University (IGNOU), suitable 12th Class certificates and Bachelor’s degrees will be awarded to the Agniveers, respectively.

The Job Roles/Skill Sets of Agniveers, while being trained and deployed with the Armed Forces, have been mapped with National Occupational Standards (NOS), in coordination with National Skill Development Corporation (NSDC) and Sector Skill Councils (SSCs).  Based on these qualifications, market-ready and industry-accepted, ‘Kaushal Praman Patra’ will be issued to Agniveers at their exit from the Armed Forces.

To seamlessly facilitate the process, various departments of MoSDE have extensively collaborated in the Armed Forces and awarded Dual Category recognition as the Awarding Body (AB) and Assessment Agency (AA) by the National Council of Vocational Education and Training (NCVET). In addition, the Directorate General of Training (DGT) under MoSDE would also facilitate the National Trade Certificate (NTC) award to Agniveers.

Shri Rajnath Singh stated that with the signing of these MoUs, Agniveers would be able to complete their education promptly and develop additional qualities and skills. He said that when Agniveers return to society after being equipped with all these qualities, they will contribute to nation-building.

The Raksha Mantri added that helping ‘Agniveers’ would be a win-win situation for all as they will not only become ‘Surakshaveers’ for the nation by rendering their services in the Armed Forces but also become ‘Samriddhiveers’ by contributing to the nation’s prosperity. They will benefit society by contributing to the nation building through their education, skill, discipline and other qualities. In addition, they would inspire the youth to become Agniveer, he said.

Complimenting the  Ministry of Defence, Ministry of Home Affairs, Ministry of Railways, state governments and the private sector for extending support to Agniveers in various services, the Raksha Mantri called upon the rest of the Ministries, State Governments and the corporate sector to come forward with more enthusiasm and provide new opportunities to the Agniveers as far as possible. He termed it the system’s responsibility to provide newer opportunities to the Agniveers who dedicate their lives to the nation’s service.”

In a video message, Education Minister Shri Dharmendra Pradhan said these MoUs/Agreements would empower the serving Agniveers to benefit from their academic education and skill development. He added that NOS would help them to pass the 10th and 12th exams, while enrolled Agniveer in university could complete 50%  syllabus of general higher studies; the rest credit could be earned through skill development training provided by defense institutions. They could get bachelor’s degree from IGNOU, and with two years completed with the necessary credit, they could get an Agniveer diploma. These degrees would help Agniveer to get employment and higher education at national and international levels.

The Government launched the Agnipath scheme on June 15, 2022, to recruit male and female aspirants into the ‘below the officer’s rank’ cadre of the three services for four years as Agniveers.  Candidates between the ages of 17.5 to 21 years are eligible to apply for the scheme. These Agniveers would undergo optimised basic military training and specialised trade training followed by up-skilling courses, as required.

The scheme provides a unique opportunity for transforming the Yuva Shakti into Agniveers and facilitates potential youth to realise their dream of serving the Nation through the Armed Forces. Exposure through Agnipath Scheme and fostering allegiance to Naam, Namak, and Nishan would shape Agniveers into Nation Builders.

There has been a whole nation approach to empower the Agniveers with suitable Academic Qualifications & Skills while serving in the Armed Forces, to help those Aginiveers who wish to start a second career option outside, with other Governmental organisations, Industry or even as Startup Entrepreneurs.

The ceremony was attended by senior officials of the Ministry of Defence, and various ministries, including the Chief of Defence Staff and Chiefs of all three Services.

Most useful Matchmaking Apps for Interactions

Green Budgeting: The Road to be Taken