Agri Acts Not in the Interest of Women Farmers: Says MAKAAM

Reforms in agriculture need large-scale investments in protecting farmers and not just agri-businesses. Small and marginal farmers, among whom are a significant number of women, form the backbone of this sector and need to be protected through robust investments towards enhancing their capacities and knowledge.

The recent legislations on the agriculture sector, which were brought in the name of farmers, will adversely and disproportionately impact a majority of women farmers, 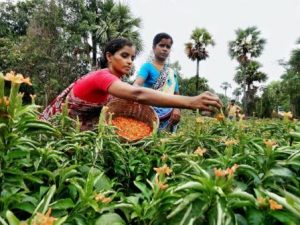 who form the bulk of the small and marginal sections in the Indian agricultural sector, stated MAKAAM (Mahila Kisan Adhikar Manch), the national forum for women farmers’ rights, in their statement. According to them, the new Acts will also impact majority of the women agricultural workers, who are dependent on the sector for their survival and livelihood.

Wages of women agricultural workers are expected to become unstable in the event of price volatility in the market. The legislations will potentially have adverse impacts on natural resources, food security base and the rich biodiversity of forest regions. The three Acts bypass and move away from the need for state intervention in the farm sector at a time when it needs it the most. The rising agrarian distress has long-standing impacts on women farmers as they end up carrying the burden of working on degraded lands, walking long distances to fetch water and fuelwood, diversifying their livelihood portfolio just so that survival is ensured. The present Acts will do nothing to alleviate the distress or protect the women and marginalised farmers, but rather have opened up more avenues to further aggravate it.

The Farmers’ Produce and Trade and Commerce (Promotion and Facilitation) Act, 2020

This Act is primarily aimed at bypassing the state-level Agricultural Produce Market Committee (APMC) regime. Although not explicit, it holds the potential to do away with determining remunerative prices and guaranteeing those to the farmers by shunning a transparent price discovery mechanism with government oversight as of now. As the 70th round of NSSO report on the Situation of Agricultural Households in India shows, only 10.5 per cent agricultural households sold their food grains to any procurement agency at Minimum Support Price (MSP). Data also point to only 36 per cent of the produce being sold in regulated markets. Then there is no new ‘freedom’ that this Act offers to the farmers given that most farmers sell most produce outside the regulated regime. Further, most state APMCs already give that statutory freedom to farmers to sell wherever they like. In fact, by weakening the APMCs by placing them on an unequal footing compared to the new “trade areas” to be regulated by the Centre, it opens up the field for big players to exploit the small and marginal farmers without any regulation or oversight.

The Act is premised on the assumption that all farmers are equally mobile and have equal access to transportation facilities to become potentially mobile to sell or purchase their agricultural produce anywhere in the country. Women farmers, with their poor mobility and access to transport facilities, are especially on an unequal footing when it comes to traveling to another place to trade their produce or bargain around better prices. In fact, what women farmers need is proximal markets, but with oversight to protect them from exploitation by buyers/traders.

As the recent study in Maharashtra shows women farmers mainly sell their produce through private traders, some of which finds its way into the APMCs, but most of it is outside of the APMCs.

Private traders are usually from the neighbourhood, are known to them, extend credit and support for agricultural inputs in times of need. This is also one of the reasons why women farmers (like other marginalised farmers like tenant farmers, marginal holders, etc.) sell their produce to these traders to whom they owe money. Besides, the produce from small unirrigated lands that women cultivate is very negligible in quantity and often wanting in the desired quality. Moreover, lack of storage facilities, transportation costs, need for cash for new investments, paying off old dues and meeting household expenses often mean that women farmers cannot stock and wait for better prices to sell their produce. They may also not be able to wait out the delayed payments compared to upfront cash payments. The male-dominated APMCs as they operate in the current form have never really benefitted the women farmers, especially single women who often have to deal with the marketing of their produce.

If Women are Anyway Out of the APMC Net, Why are We Concerned?

Exploitative as the private traders may have been, they still provided the support that a woman farmer needed by way of seed, credit and purchase of her small quantities of produce and paid her upfront. The new Act defines a trade area outside of the mandi, which is likely to bring in new and bigger private players who may not see profit in trading with smaller farmers and would finally move towards the aggregation of produce through a new set of intermediaries who will operate in a very different ecosystem than what the women farmers were familiar with or even have access to due to the pervasive gender discrimination and restrictions on their mobility. 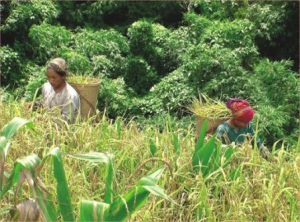 Although many women farmers sell to private traders, the existence of an APMC ensured that prices remained somewhere close to MSPs, and therefore narrowing the margins of exploitation. The role of the APMCs to signal prices has allowed for some bargaining power to negotiate prices and is thus important even if they sell outside of the APMCs. Increasingly women are getting organised into Farmer Producer Organisations (FPOs) and struggling to market the produce through them. However, instead of supporting them through market and credit linkages, the present Act puts these upcoming institutions at par with existing traders and other big corporations, seeks to over-regulate what are essentially autonomous entities of farmers themselves and creates an unequal playing field.

Instead of bringing in reforms that regulate the traders outside of the APMCs and correct the anomalies in the APMC to make it more women farmer-friendly, the Act has proposed to bypass the APMC and usher in an era of fragmented and unregulated markets. Withdrawal of the government with direct interventions in the market as well as regulatory oversight effectively means that the small and marginal farmers would be left at the mercy of the big sharks in agribusiness. Instead of investing in appropriate infrastructure to address the distress of the women and marginalised farmers, it is completely non- committal, moving away from the real issues of these farmers.

The PDS has been a lifeline for food access for all citizens during the pandemic, with even the government using it for distribution of relief food rations under the PMGKY. The proposal to remove cereals, pulses, potatoes from the list of essential commodities is bound to impact food security goals. It is also an invitation to attract big corporates FDI into grain trade at a time when rest of the industry is in the doldrums and 90 metric tonnes is lying in the godowns and more to come by way of Kharif procurement. The haste in bringing in the act is quite evident. The current PDS system supports poor families with only one cereal grain on a monthly basis and this is inadequate to meet all food and nutrition needs of a family. Further, many households are out of the PDS net given the targeted approach rather than universalised approach adopted in this food security scheme. The changes in the ECA which now more or less de-regulates fully the food supply systems in India, except for potentially ineffective regulation during ‘extra-ordinary circumstances’, would have serious implications on the food availability of the most vulnerable populations when such food is (invisibly) hoarded and becomes unaffordable. When 38 per cent of our children under the age of 5 years are stunted, 50 per cent of pregnant women (15-49 years) are anaemic, the government should expand its PDS to address hunger and malnutrition. The pandemic more than ever has reiterated the need for strengthening public systems and has demonstrated how despite some weaknesses, the PDS and MNREGA have been the saviours for the poor. Under the Essential Commodities Act, with the cap on storage and pricing being taken away (except under extraordinary situations), women as farmers, agricultural workers, consumers as well as beneficiaries of the PDS will be adversely affected in future.

The Act seeks to legalise contract farming across the country, while claiming to enable farmers to get into other agreements related to seeds, other inputs and prior agreed price etc. Read from the perspective of a majority of women farmers, who are dependent on small and marginal holdings, either as direct cultivators or tenants, these provisions are neither empowering nor provide any protection in reality! Firstly, given the poor literacy levels among women in general in the country and specifically among women engaged in the farm sector, they are barely in a position as empowered agents, who can either understand or negotiate (written) agreements with traders and corporate entities who are seeking to enter into agreements with the farmers to purchase their produce or for other services.

Secondly, the conciliation or dispute arbitration framework that is provided in the above Act is clearly weighed against small and marginal farmers in general and women farmers in particular.

The new Act seeks to transfer powers equivalent to the civil court to the SDM and the Collector in the event of any non-compliance or dispute related to the written agreements.

In addition to the above challenges, women farmers in general, and especially those who are single, will barely be in a position to afford the time and financial resources to get their problems redressed under the new framework. The new dispute redressal framework visualised under the Act, with no appellate authority is barely gender-sensitive and in fact, effectively forecloses any option available to small and marginal farmers and especially women to get their problems addressed in a favourable manner. Despite assurance from the Central Government that MSP for farm produce will continue, this is not written into this Act either anywhere.

In the medium to long term, protecting farmers’ rights is not only about assuring markets and remunerative prices, but also about ensuring the necessary supports to improve yields without harming nature. Promoting bio-diverse models based on agro-ecological principles in agriculture that ensure diversification of crops, providing for protective irrigation for promoting bio-diverse models, and providing support for other agricultural inputs and practices are important. In brief, reforms in agriculture need large-scale investments in protecting farmers and not just agri-businesses. Small and marginal farmers, among whom are a significant number of women, form the backbone of this sector and need to be protected through robust investments towards enhancing their capacities and knowledge.