It is time that the appointment of judges’ collegium to the Supreme Court of India is done in a transparent and accountable way. 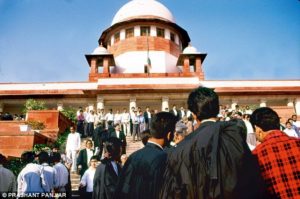 t is time to revisit the debate regarding the process of appointment of judges in India. This debate becomes more valuable and significant considering currently there is lack of accountability and transparency in the process of appointment of judges. By virtue of so many interpretations/decisions of the Supreme Court, it was established that the ‘collegium’, which is a supreme body, will be responsible for appointment/transfer of High Court judges as well appointment of Supreme Court judges. However, from Justice Ramaswamy’s impeachment proceedings in Parliament till Justice Soumitra Sen’s impeachment proceedings, nothing has changed and nothing has evolved except the supremacy of the collegium.

The tussle which took place on January 12, 2018 with the first ever press conference of four senior-most judges of the Supreme Court against the Chief Justice of India for assigning cases, shook the confidence of the people of this country in the institution called the ‘Supreme Court’.

Further, the deliberations of the collegium which have remained a secretive affair for almost two decades became a matter of concern when Justice Chelameswar ordered making the collegium’s deliberations open to public. But that also does not serve the purpose because the question remains as to how the judges are appointed. . Even if such deliberations in the form of file notings are open to public by the virtue of the Right to Information (RTI) Act, people at large still do not know how the judges are appointed. Although, this is not to disregard Justice Chelameswar’s order which is excellent and definitely opens a new era of transparency and accountability in deliberations of the collegium.

“Another problem is the collegium is untrained in the task of selecting judges and they seem to select judges in a secret and bizzare fashion. There could be room for nepotism, communalism and favoritism in the absence of guidelines.”

The selection process excludes judges. “Nowhere in the whole of the world, judges alone select fellow brother judges”. The collegium is a disaster; P.D. Dinakaran episode is an example. A new code by the constitutional chapter has become imperative. Appointment is a desideratum. Justice J. Chelameswar , the sole judge who dissented on the National Judicial Appointments Commission (NJAC) judgement against the opaque system of appointing judges to the Supreme Court and High Court also said that the collegium system has failed.

Even the instance of not appointing somebody like Gopal Subramanium to the Supreme Court was a matter of concern. Needless to say, Gopal Subramanium would have been an insurmountable judge if he had been elevated as a judge of the Supreme Court. The integrity of the procedure followed in the appointment, transfer and succession of the judges of the highest judiciary is definitely under scrutiny.

The subjective manner of the collegium system in appointing judges to the Supreme Court of India was evident in the recent case of Justice K.M Joseph, the Chief Justice of Uttarakhand High Court, who was although recommended by the collegium but not elevated to the Supreme Court. By virtue of In Re Presidential Reference No.1 Of 1998, it was decided by the Supreme Court that on reconsideration by the President of India for the second time, he is bound by the decision of collegium. Then why was Justice K.M Joseph’s name dropped? The nation doesn’t even know the reason.

The almost 20-year-old collegium system has been severely criticised even by the Supreme Court which was itself a member of the collegium. The main allegation is that there is total lack of transparency. Members of the Supreme Court collegium have also been accused of exploiting their power to appoint their close relatives or particular lawyers as High Court judges. Similarly, personal animosity has resulted in delay or denial of appointments to the Supreme Court. The fact that the process of appointment is in the hand of the judges is a serious problem.

Subhash Chandra Agrawal, in an RTI before the Supreme Court in 2009, asked for the file noting of the collegium for elevation of certain Chief Justices of High Courts to the Supreme Court of India. However, Central Public Information Officer vide his letter dated October 10, 2009 refused to provide the requisite information on the ground that the same could not be provided for want of confidentiality.

“I think the system of appointment and elevation is such a matter of concern, whereby sometimes it seems that few got elevation and few got rejections with no reason on record.”

The above discussion has shown that the collegium has failed miserably and there are innumerable instances whereby we have seen people losing faith in the judiciary. I can say with conviction that if more impeachment proceedings are to be seen in the future, then it will definitely obstruct the future of independence of judiciary in India.

Taking the whole situation into consideration, I feel that now the time has come when legislation is required. No doubt NJAC failed miserably but another legislation in the form of National Judicial Commission (NJC) can be a better solution. The previous anomaly in NJAC, where two eminent persons were not properly defined in the act can be resolved and the United Kingdom model can be followed.

In United Kingdom, there is a Judicial Appointment Commission (JAC) consisting of 15 members and the Chairman is always to be a lay member. Out of 14 Commissioners, five are judicial members, two are professional members, one is a tribunal judge and another is a non-qualified judicial member. The current JAC in UK has two professors in it.

Hence, taking all the aspects of judicial independence and the faith of the people into consideration, I believe that we can also think of a 10-member NJC whereby the Chief Justice of India shall be the Chairman of the Commission and the members of the Commission include two senior most judges of the Supreme Court, two professors of repute with at least 10 years’ experience, two government representatives from All India Service with a degree in law, two representatives from the Bar Council of India with 10 years of practice in Supreme Court and a Law Minister from the Union Government.

Decision should be taken on the basis of majority. If no candidate is selected on the basis of majority, then he or she should be dropped from the probable list. There must be no primacy of anybody including Chief Justice of India. This NJC should be subjected to RTI. The people of this country have serious faith and respect for the judiciary and it should not be lowered in any sense. If we want democracy to excel in our country, then we will have to think about a transparent system of judicial appointment keeping in mind that access to justice is the pre-requisite to administration of justice.

The write is an Assistant Professor, Faculty of Law, University of Lucknow. He can be reached on twitter @chhachhar_varun