Aung San Sui Kyi’s reputation in perils or is the fate of the Rohingya?

Suu Kyi’s tarnished image might strain her popularity but could this possibly bring any justice to Rohingyas?

R ecently, the Myanmar government received much censure for seven years’ jail sentence given to two Reuter’s journalists, Wa Lone and Kyaw Soe, for violating the Official Secrets Act while carrying out their duties responsibly to investigate extermination of the Rohingya. This is not just a crushing blow to human rights but death of justice and freedom of press.

“Fundamental violations of human rights always lead to people feeling less and less human,” mentioned Myanmar’s civilian leader Aung San Sui Kyi, who was once, indeed, vocal about human rights and civil liberties for she was denied her freedom too. However, her moral imperative stands questioned as it has come under the disparaging scrutiny of global media for lack of support rendered to the Rohingya.

The campaign of mass atrocities and grave crimes against the Rohingya started a year ago. It led to an estimation of 700,000 of the ethnic population fleeing to neighbouring Bangladesh in search of refuge.

One year on, the crisis hasn’t subsided but is only getting worse with ongoing and looming tropical monsoon season hovering over makeshift camps such as Kutupalong and Balukhali in Bangladesh.

Rohingyas who have claimed to flee extra-judicial killings, arson, rape and systemic persecution, continue to find means to survive in squalid makeshift shelters; as many as 6,000 are believed to be stuck in No Man’s Land, a chunk of land between Bangladesh and Myanmar, awaiting assistance and an uncertain fate.

“The situation was described as ‘the textbook example of ethnic cleansing’ by the UN but de facto leader Sui Kyi came to Myanmar’s security forces’ defence, stating that the crisis was triggered by terrorism and not by social discrimination.”

She refused to denounce security forces actions and instead warranted her government’s ‘cleansing operations’ against the Rohingya community. She even refused to refer to the beleaguered Muslim community by its name. She escaped attempts to address the international community at various occasions about the much talked about crisis, including the UN General Assembly, last year.

Recently while addressing the public at a lecture in Singapore, she said that the laborious task of repatriation of the ethnic community, now residing mostly in Bangladesh, could not be carried out unilaterally. The compass needle points towards uncertainty surrounding the fate of more than a million people whose safe return to Myanmar cannot be assured. The UN has shown scepticism about the process of repatriation, fearing that once back in their homeland, their freedom of movement could become more restricted.

A recent UN finding suggested that the country’s top military officials are to be prosecuted for genocide over allegations of human rights violations and atrocities committed against the ethnic minority community. The accusations levelled by the UN investigation report consist of war crimes and crimes against humanity such as gang rape, enforced disappearances and the burning of entire villages. According to the report, atrocities committed by the Tatmadaw, the country’s security forces, “undoubtedly amounted to the gravest crimes under international law”. Besides Rakhine, the other affected regions Kachin and Shan were also included in the report.

The report had received worldwide attention, including the UK’s Foreign Secretary Jeremy Hunt, who in his tweet suggested motivation to pay a visit to Myanmar “to seek answers at the earliest opportunity”. Among the six top military officials, the report had picked out Senior General Min Aung Hlaing, the commander-in-chief of the Tatmadaw, for investigation and trial for genocide against the Rohingya.

“The UN Mission had also asked for Myanmar to be probed by the International Criminal Court. It has sought support of leading human rights organisations such as Human Rights Watch, Save the Children and Amnesty International to bring Myanmar under the deliberations of the ICC.” 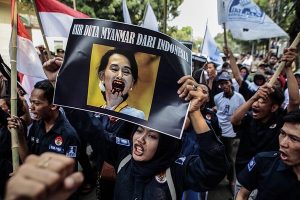 The UN Report has most likely antagonised Myanmar’s military and the civilian government, both of whom have defended the alleged genocide as a justified response to “terrorists”. Suu Kyi did not release any official statement on the report but Myanmar Government has rejected the key findings of the report, calling the investigation a farce and a sham and that the international community has made “false allegations”.

The fact-finding UN Mission’s report brings home the message that there is an undeniable need to take powerful steps to further the criminal prosecution against perpetrators of genocide and crimes against humanity. Social media giant Facebook had also done its part by removing 18 accounts and 52 pages related to Myanmar Army as well as pages sympathetic of Min Aung Hlaing. Earlier, Facebook had witnessed strong criticism levelled against the company for failing to curb anti-Rohingya sentiment spread across the platform. The accounts that were taken down on Facebook had a whopping 12 million followers.

“The UN Report condemned the country’s de facto leader’s impassive role over a period of a year. Despite herself being an advocate of democracy and human rights, she had done little or close to nothing to reprimand the Army’s actions.”

So even though Suu Kyi, also the State Councillor, shares her power with the military, she continues to have enormous mass following and noble imperative to castigate events as  bad as systemic extermination of the ethnic minority in the country. Clearly to which, she only gave her subtle approval.

Regardless of such grave allegations and strong condemnation by the international community, Olav Njoelstad, the secretary of the Norwegian Nobel Committee, stated that the Nobel Prize she won for her fight for democracy and freedom up until 1991 won’t be withdrawn. This has put serious questions on the decisions of the Nobel Prize Committee as it has refused to condemn anti-ethical actions of the award winner. The committee has clarified that the award cannot be revoked as such an act would go against their rules.

In fact, former committee chief, Berit Reiss-Andersen, had said: “We don’t do it. It’s not our task to oversee or censor what a laureate does after the prize has been won. The prize winners themselves have to safeguard their own reputations.”

Such a case must bring about an overhaul change to the structure of credible international bodies, particularly those that claim to be forbearers of justice and guardians of human rights. To demonstrate hollow expressions of concern and politically-motivated condemnation is one thing. Concrete steps to safeguard human rights and hold perpetrators legitimately accountable through legal arguments is quite another. Member States to the Rome Statute mustn’t stop short of calling for Myanmar to be investigated by the ICC.

Departing UN Human Rights Chief Zeid Ra’ad al-Hussein has called for state councillor’s resignation over her government’s campaign against the Rohingya which took place last year. In his latest interview with BBC, Hussein said, “She was in a position to do something. She could have stayed quiet – or even better, she could have resigned.”

He further added, “There was no need for her to be the spokesperson of the Burmese military. She didn’t have to say this was an iceberg of misinformation. These were fabrications.”

“Lately, seeing her complicity towards the issue and her constant denial to admit Myanmar military’s actions of mass killings, Freedom of Edinburgh has joined the list of seven accolades and awards she has been stripped of over the past year.”

Others include Elie Weisel award by the US Holocaust Museum and Freedom of City awards revoked by Oxford, Newcastle, Dublin and Glasgow. London School of Economics’ Students Union barred Suu Kyi of the award of honorary President followed by the example of UNISON which invalidated her honorary membership.

Antonio Guterres, the UN Secretary General, has insisted the Security Council to take appropriate measures so that those behind the genocide could be held accountable and brought to the court of law.

Nikki Haley, the US ambassador to the UN, came in support of the demands of prosecution raised by fellow Security Council members, urging, “The facts of the ethnic cleansing of the Rohingya must be said, and they must be heard.” After sharing his experience of the visit to Cox Bazar, he commended Bangladesh for its generous response to the crisis but reiterated for a global response to “one of the world’s worst humanitarian and human rights crisis” and global support to make certain Myanmar is held responsible for its violations and transgressions.

“Other countries such as Britain, France, the Netherlands and Sweden called for those who orchestrated the violence to be prosecuted by an international Tribunal. However, China and Russia refrained from making loud statements and insisted on the mechanism of “dialogue” with the Myanmar officials to find a lasting solution to the crisis.”

Diplomacy aside, the crisis has not brought any relief to the Rohingya population. Humanitarian aid which remains underfunded cannot be the lasting solution to the catastrophe which wreaked havoc on women and children alike. International support, so far, is confined to statements and demands for more emergency aid and little has been done to ensure justice be served to the victims of ethnic cleansing.

Buddhism has always attracted me owing to its rational approach: Benoy K Behl