The principle adopted by states to grant environmental clearance in the name of ‘national importance’ which actually only benefits some, has led to occurrences like Baghjan oil and Vizag gas leak.

Baghjan oil field, operating since 2003 in Tinsukia District of Assam, has a total of 22 producing wells 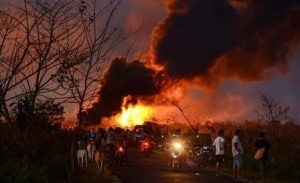 – 18 crude wells and four gas wells. On 27 May, when the engineers were trying to extract oil from 3729 meters deep, a blowout occurred, and it prompted persistent leakage of oil. It led to continuous leakage of oil, and nearly 9000 people were evacuated from nearby villages to relief camp. After 13 days, on 9 June a massive tremor of fire blow out was experienced by the people living around Baghjan. Nearly 11,000 people were evacuated to 12 nearby relief camps. The fire burned several houses and severely affected the environment. District officials stated three villages in Doomdooma and Tinsukia revenue circles – Baghjan village, Dighal Tarang and Baghjan NC village bore the major burn out of the blow out. Around 3160 farmers in the area, 1210 hectares of agricultural crop area, 470 hectares of small tea garden and eight fish farms of a combined area of 0.86 hectares and 51 fishermen were affected. “After the gas well exploded, we fled our home, we could only carry a few clothes, everything was left behind, we are worried about our future, what will happen to us and our children? The oil spill has damaged our crops and fields, moreover we don’t know if we will finally be able to go back home” lamented Rupali Saikia, a mother of two staying in a relief camp. Since the first blow out, there was protest going on, protestors blocked 14 oil wells and gas well, the disruption led to massive loss of around 88MT crude oil and 0.14 MMSCM of natural gas. Two firefighters were found dead by the rescuers of National Disaster response force (NDRF).

Baghjan oilfield is located a kilometre away from Maguri motapung wetland, which has both riverine and wetland kinds of fish. It is sustenance for fishermen living in nearby villages and women, who pick up snails as their daily routine. Just 2 km away from Baghjan is Dibru Saikhowa National Park, which has an area of 340sq km with semi evergreen, deciduous forest, and houses endangered species like tiger, gangetic dolphins, migratory birds and fishes. After the blow out, several pictures of dying animals and birds, in the wake of air and water pollution, were shared in social media. Oil India Limited (OIL) official said, “as the well was sporting gas and condensate droplets for 15 days, that got spread to a vast area, the fire almost burned everything in a radius of one km from the site”.

Krishangi Saikia, a resident of Tinsukia, stated that, “the blow out resulted in carcasses of endangered species like gangetic dolphins and several birds”.

She also added that “villagers were receiving oil in their tap waters and the smoke is causing breathing issues to the people” According to the OIL’s statement, three organisations are currently carrying out assessment of the impact on the environment on ecology,air quality and noise. Three experts from Singaporean firm on disaster management were brought in to control the fire who assured that the well can be capped in four weeks.

The only hurdle, for obtaining environmental clearance for the linked drilling project, was the Supreme Court’s judgement of 2014 that restricts mining within one km boundary of a protected area. Hence, the OIL filed a petition, and the argument provided was that the scope of the judgement is limited to the Mines and Minerals Act 1958, whereas drilling in this case would be considered under Oil Field Act 1948. On 12 April 2016, the Supreme Court passed the applicant to the central empowerment committee and it recommended the case to the Standing Committee of the National Board of Wildlife (SC-NBWL). The court directed the SC-NBWL almost three times to consider the project and take decisions on it.

Not long after the CEC decision, OIL applied for the Terms of Reference (TOR) for exploration of oil and gas 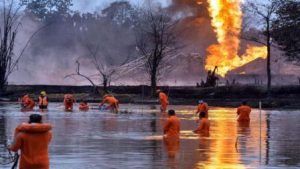 in the region, it was required to direct public hearing on the proposed site nonetheless, OIL requested Expert Appraisal Committee (EAC) to absolve it from leading public hearing since it has just had a public hearing in July and August 2011 in the similar region corresponding to another drilling and exploration venture by it. OIL provided an undertaking on environmental safeguards and its obligation in the occasions of mishaps. In May 2018, the Ministry of Environment, Forest and Climate Change (MoEFCC) requested that the OIL should lead public hearing; however the proposition was submitted again with no public hearing. OIL claimed, “conducting public hearing in the area is a big challenge due to unruly acts by the pressure group”. EAC in its meeting in December 2019 referred to the vulnerability of the region and the organisation as the purpose behind adhering to the choice of exclusion. It even went to a degree to give estimation of loss of the country because of the deferral of the venture. Finally with favourable decision of SC-NBWL and exemption of public hearing, the project was recommended environmental clearance by the EAC. Even the concern raised by the ministry seemed for the sake as eventually the permission of environmental clearance was granted, this is the main concern of environmentalists and locals on how the omission of public hearing was carried out and approved so easily. Does the public hearing that was conducted some years back really suffice the opinions of present? Instead of emphasising on precautionary measures, ministry is applying the principle of post facto, ‘pollute and pay’. OIL announced compensation of Rs 30,000 to each affected family, but is this sufficient for the loss of life, agricultural lands and livelihood of the locals, and significantly it cannot undo the harm done to the environment. This principle adopted by states to grant environmental clearance in the name of ‘national importance’ which actually only benefits some, has led to occurrences like Baghjan oil and Vizag gas leak.

Aftermath of Blow Out

The National Green Tribunal imposed fine of 25 crore on OIL India over its failure to stop the fire in Baghjan oil field. A bench comprising Justice S.P Wangdi, expert member Siddhanta Das and former high court judge B.P Katakey are to look into the matter and submit a report in 30 days. “In view of prima facie case made out against OIL on the extent of the damage caused to the environment and biodiversity, damage to both human and wildlife, public health and, having regard to the financial worth of the company and the extent of damage, we direct the OIL to deposit an initial amount of 25 crore with Tinsukia district magistrate”, the bench stated.

“The company is carrying out an internal inquiry and we have placed two officials responsible for the well, they are under suspension and once the probe is over, we will take a final decision on their role”, OIL stated.

New Amendment in Environment and Drafting of NAP

Over the years there have been growing movements to address business and human rights issues, which makes the business holders liable for human rights abuses caused by the business activities. India is developing a National Action Plan for Business and Human Rights (NAP-BHR), which is constituted by three pillars, i.e., Protect, Respect and Remedy. It is the role of the state to ensure that these three pillars are grounded in reality. A zero draft was released by the Ministry of Corporate Affairs, which mostly restates the existing law, but fails to provide a future vision with the guiding principle at the core. On 16 January 2020, the MoEFCC made an amendment to the existing Environmental Impact Assessment (EIA) law and made all on- and off-shore oil and gas exploration projects ‘B2’, which don’t need public consultations. A new oil and gas exploration project by OIL in the same district is under, but due to the amendment, this will be under B2 category project and will be appraised at the state level and will not require a public hearing. Evenafter we have witnessed many cases like Mumbai blow out, Vizag gas leakage, Bhopal gas tragedy, etc., this arises the question on drafting of NAP, if it is just another ‘toothless’ or ‘just feel’ good instrument of the state.

The present condition of the Baghjan oil field, as stated by OIL, is that the heavy rainfall is affecting the operation drive. It has damaged the connecting roads so there is delay in the movement of equipments/materials from the site and it has also affected the relief camps. Debris removal activity has been started which is the most important critical component of capping operation of the blow out. Environmental assessments on impact on soil and noise are also being carried out.

The writer, a public policy researcher, is pursuing Masters in Law, Politics and Society from Ambedkar University, Delhi. She can be reached @Ronyapeter