A tale of love, the film has a strong social message. It asks some pertinent questions about climate change.

Kokoli is a tale of love, woven around the backdrop of climate change and global warming and its 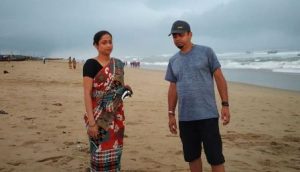 effect on the fisherman community of coastal Odisha in the face of looming rise in sea level. “Kokoli”, is the name of a sea fish as well as the name of the female protagonist in the film. The film depicts the struggle, predicament and reluctance of the fishing community to abandon their homes near the sea. They are at a loss to fathom that the same sea, which once used to be their sole provider of livelihood, is now going to displace them, swallow their homes, families, lives and livelihoods.

The film revolves around the two love birds – Kokoli and her boyfriend – who try to build a wall in the bank of the sea to keep away the towering waves from destroying their homes. Unless he succeeds in this task, he is not going to win her mother’s approval to marry Kokoli.

Although a love story, the film has a strong social message. It asks some pertinent questions about climate change like where these fisherman community people will go, what occupation they will adopt when they are compelled to abandon their homes near the sea, as fishing is the only source of their livelihood, or the only skill they know. It also delves on the questions – is the rise in sea level the fault of these fisherman community people or are they paying the price for someone else’s greed?

Kokoli is in Odia language with English subtitles. The film has been produced under the banner of The Naked Eye in association with Ckinetics. The flawless direction by Snehasis Das and compelling performance by Gargi Mohanty, the protagonist and others, make this film a must watch for all cine lovers. This film will appeal to the youth because of its content and message for social and environmental change. Beyond the accolades and awards it has won so far, Kokoli is altogether a different experience to watch it, live through the entire film – its depiction of the love and romance, the smile and cry, the pain and despair, and the flicker of hope and undying desire.

The writer, a social activist, poet and a theatre actor, is originally from Odisha, but presently based in New Delhi. He can be reached @sadanandbag