Ban on Chinese Goods and FDI

During the last seven financial years, Foreign Direct Investment (FDI) inflows worth US$ 440.26 billion have been reported in India. 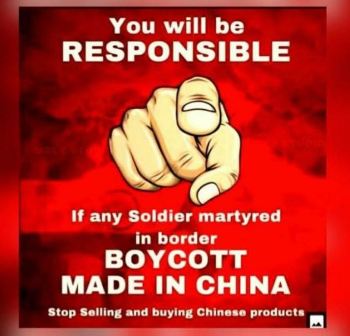 Chinese goods citing strained relations with China.  In June 2020, a representation was also received from a Member of Parliament calling for banning/boycotting of all Chinese goods in light of developments at Line of Actual Control (LAC) in Ladakh.

The Government of India, from time to time, takes appropriate measures to regulate import of goods including those related to national interest.  India and China are both members of the WTO and any trade restriction imposed must be WTO compliant.  Government has from time to time reviewed and taken WTO compliant measures (both policy and trade remedies) to address the concerns raised by various stakeholders to have a holistic global trade strategy.  To support and expand domestic capacities, Government has implemented policies to promote domestic manufacturing like the production linked incentive (PLI) schemes in line with Atmanirbhar Bharat policy.

This information was given by the Minister of State in the Ministry of Commerce and Industry, Smt. Anupriya Patel, in a written reply in the Lok Sabha.

During the last seven financial years, Foreign Direct Investment (FDI) inflows worth US$ 440.26 billion have been reported in India. FDI inflow in India stood at US$ 45.15 billion in 2014-2015 and has increased since then. The financial year wise details are as under:

To promote Foreign Direct Investment (FDI), the Government has put in place an investor-friendly policy, wherein except for a few sectors, most sectors are open for 100% FDI under the Automatic route. Further, the policy on FDI is reviewed on an ongoing basis, to ensure that India remains attractive & investor friendly destination. Changes are made in the policy after having consultations with stakeholders including apex industry chambers, Associations, representatives of industries/groups and other organizations.

Government has recently undertaken a number of reforms across sectors. In the last one year alone, reforms in the FDI policy have been undertaken in sectors such as Insurance, Defence, Petroleum & Natural Gas, Telecom, etc.

This information was given by the Minister of State in the Ministry of Commerce and Industry, Shri Som Parkash, in a written reply in the Lok Sabha.