Once in debt bondage, survivors are challenging the status quo and striving to rebuild their own and their community’s life through ‘being the change they want to see in the world’ even as the Anti-Trafficking Bill 2018 has been tabled in the Parliament.

uite hesitantly, Anil, in his twenties, opens up about his wife’s delivery that took place in a government hospital, a first in his village. Then, he goes on to share about bank accounts being opened, all children in the school-going age in his village going to school, loan amount being paid off completely and buying a land. He continues with listing achievements such as getting electricity connection, installation of a hand pump for water, construction of 26 houses under the Pradhan Mantri Awas Yojana (PMAY), organising health check-ups, building toilets in every household and a road being constructed in his village, a small hamlet in Madhya Pradesh’s Khargone.

Anil is one of the millions of bonded labourers in India who are now free to build and live a life of their own. Though the struggle has not been easy, Anil, who was freed from bonded labour, three years ago in January 2015, has been an active member/leader enabling change in his community through what he calls “essential deeds”.  By registering plaints with the Panchayat from time-to-time, he went on to resolve some of the urgent issues faced by his community.

Pappi Kaur, a survivor of bonded labour, in her late fifties, wants to a build a committee in her village in Punjab so that more and more women, who have been freed from bonded labour, can participate in the community to bring about a change. As part of a ‘mahila mandal’ (women’s commission) in her village, she has bought vessels for the community to use during common festivals.

These are two of the many stories of resolve and dreams that the once bonded have started to live and breathe. Voices like these can be heard from other states of the country at Swabhimaan 2018, a three-day platform bringing together around 20 survivors from various states of the country including Punjab, Bihar and Rajasthan. They were engaged through initiatives by International Justice Mission (IJM), an organisation that works alongside governments to rescue and rehabilitate as well as train public justice officials against two forms of trafficking – Sex Trafficking and Bonded Labour.

“According to Articles 21 and 23 of the Indian Constitution, bonded labour is prohibited in India. Further, a specific law, the Bonded Labour System (Abolition) Act came into being in 1976.” 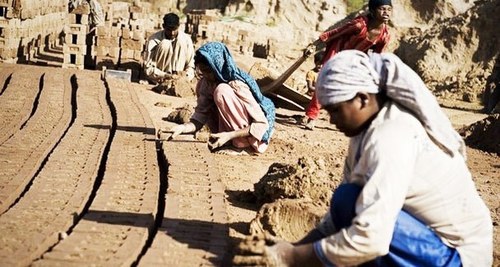 The consequences pertain to freedom from obligation to render bonded labour, the customs, contracts, agreements or instruments as well as any bonded debt to be repaid. However, in reality, debt bondage is still widely practised with the worst affected being women and children from the backward communities.

The Government of India’s Ministry of Labour initiated a Centrally Sponsored Scheme under which ‘Rs. 20,000 is provided for the rehabilitation of each bonded labourer, to be equally contributed by the Centre and the State Governments’. Yet, the process of rehabilitation has been frequently marred by delays and poor implementation, mostly owing to inter-state bonded migrant labourers. There is also lack of a comprehensive action plan on the part of authorities which makes it essential for survivors like Anil and Kaur to come forward, initiate dialogue and fight for their rights.

Twenty three-year-old Dharmendra, who belongs to a small town in Burhanpur district of Madhya Pradesh and was freed in February this year, recollects to Delhi Post, the ordeal he underwent as bondage.

“We were beaten up regularly by the ‘sahib’. We left at six in the morning and returned only at one at night. They gave us only half kilogram of ‘dal’ (pulses) and half litre of oil for 15 days for the entire family.”

He continues, “But after I was rescued by NGO Jan Sahas, I have been working towards bringing an Anganwadi centre for the children, electricity for every household, shramik or labour card for all the labourers, and also made Aadhaar cards for 17 people.” He is one of the few who has filed a complaint against the contractor who forced them into entering into a contract in the first place.

According to the Act, it is the responsibility of state governments to identify, release and rehabilitate the bonded labour. But in many instances, they have not risen to the occasion. This makes it important for the survivors and the social workers working alongside them to raise their own set of issues and make their voices heard. And this is what some of them have initiated in their respective villages and towns.

Concurs an IJM staff, “It is mandatory that survivors have the confidence to gather their life back and start afresh. It does not mean hand-holding becomes a norm, it just means that they need to be shown the way so that they can make on-ground, practical and realistic changes, and in turn, survivors can help other such survivors and potential bonded labourers.”

The event which brought together the survivors took place as the Trafficking of Persons (Prevention, Protection and Rehabilitation) Bill, 2018 has been tabled in the Parliament which was approved by the Centre on February 28, 2018. According to the Press Information Bureau, the Bill will address the issue of trafficking from the point of view of prevention, rescue and rehabilitation.