Book Review: Is ISIS Caliphate coming to the doorsteps of India?

The key speciality of the book, ‘The ISIS Caliphate: From Syria to the doorsteps of India’ is that it looks at the region through the lens of the desire of the Muslims towards re-establishment of the caliphate and presents the rise of ISIS in this light.

uoting Toni Morrison, “If there’s a book that you want to read, but it hasn’t been written yet, then you must write it.” In the present times, when the entire international community is so much concerned about how to bring stability in the Middle East region, for which scholars, security strategists, rulers, politicians as well as the common man are seeking to understand the history of the region and all the main events that led up to what it is today. All these people have to rely on piles of papers on foreign policy analysis reflecting a particular state’s national interest, media stories, writings on Islam and by Islamic scholars or books on the region usually presented in a language that could only be understood by scholars and statesmen or mostly highlighting the dark side of the one particular religious beliefs and its consequent effects such as terrorism.

Fortunately, Stanly Johny, the international affairs editor of The Hindu probably inspired by Morrison to write a book that was much a need of the hour and published ‘The ISIS Caliphate: From Syria to the doorsteps of India’. Stanly Johny‘s first book is a remarkable account on the Middle East, in a language that can be understand by a common man and beautifully connecting the latest events such that any man of this century, while reading the book can easily trace connections in his memory of the individual events that occurred in different parts of the region.

He starts his book by posing important question on birth of Islamic radicalism in the modern era. Whether this radicalism was against just western ideology or was there something deeper. The struggle of Arabs to re-establish the glorious days of Ottoman caliphate towards a pan Islamic union. The question on what led to the rise of jihadist nationalism and what helped it reach the scale we see today. The rise of ISIS and its impact as the author himself puts it, “What made ISIS emerge as the most potent terror machinery of our time in a matter of few years?”

After the dissolution of the Ottoman Caliphate, there have been several attempts by different rulers in the region, at frequent intervals in the history to re-establish caliphate in the region and a caliph to whom all the Muslims in the world could claim their allegiance. All the attempts proved to be a failure until the Islamic state of Iraq and al- Sham, or Greater Syria (ISIS) declared an Islamic caliphate and it leader, the Caliph. There are several reasons for the rise of ISIS, one of the main factor is the chaos and political nihility created in Iraq after US intervention and overthrowing Saddam Hussain’s regime. The book also mentions that the top commanders of ISIS are former military officials of Saddam’s regime who found themselves jobless overnight. ISIS, which started as the Iraqi branch of Al- Qaeda along with Jabhat al-Nusra, its Syrian associate seized vast extent of territories, proclaim strict adherence to ‘sharia’, the Muslim law and trained fighters for ‘jihad’ (fight for faith).

In his book, Johny records how young boys can be lurked to jihad by manipulating the teachings of Islam as the author mentions the examples, one of which is about a boy from Kerala, who at first loved music and cinema, but later through association with some groups got inspired by their teaching of Islam which was mostly strict adherence to ‘Sharia’ and started condemning what he once loved; calling it ‘haram’. Author pointing out on the success of ISIS says that what differentiated ISIS from other terror groups is its “capability to globalise its ideology of terror and mobilise youth from around the world”, stretching from Canada in the west to India in the east. Also, ISIS, unlike Al- Qaeda did not decentralise its power but “concentrated the power in Caliphate although it decentralised its ideology”.

The author appears to picturise the rise of ISIS and credits its success mainly to the works of its leader; Baghdadi and his men. However, knowing that the ISIS plays a key role in manipulating the geopolitics of the region, it is easily presumable that it cannot achieve so much success unless its personnel and its operations are backed by few nation states whose national interest are in tune with the existence of ISIS. Anybody who understands how the game of international politics is played can vouch for complete elimination of the ISIS by NATO. We have seen previously in the cold war times how the American hegemony was successful in spreading American ideas globally and it is certain that still continues, its proof being large scale migration to the US from all over the world, intermixing of the American culture with the local culture in many states and the primary area of diplomacy of many states still revolve around having strategic and cordial relationship with the US.

The US and NATO along with other democratic states combined still have the capability to destroy ISIS, its existence is definitely at the mercy of a few states that want it’s presence, which the book does not mention. 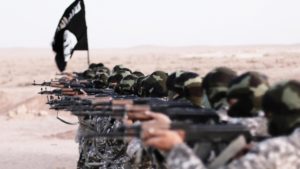 urther, the book describes how ISIS had reached the ‘doorstep of India’. Author claims that maximum number of people who have got inspired by ISIS are from Kerala and how that state is slowly becoming the base of ISIS propaganda and operations in India. He elaborately speaks about how so many men, women and children from India have gone missing and Intelligence officials assume that they are either in one of the ISIS controlled regions in order to fulfil their duty as Muslims to visit the caliphate. Although Kerala is the dominant state which houses maximum number of ISIS supporters, however, it is slowly spreading its wings in other states of South India. According to the author, it might take time to spread extensively in the northern part. To this, one can say that Muslims in north India and south India come from two different schools of thought. Muslims in North India are mostly the ones displaced due to partition or are the ones that carry the wounds of partition; their thought is basically of communal disbalance and confusion. Hence, their objective is to attain independence or inflict pain to Indians or people of other religious community rather wanting to establish an Islamic state. Therefore, they are more likely to declare allegiance with groups that are pro-Pakistan or pro- independence of Kashmir. Muslim community of South India basically focus of establishment of ‘true form’ of Islam and in all probability their support for ISIS will continue in future.

Also the author tried connecting dots to see how ISIS became the most potent terror machinery and gives a very rational argument that ISIS mobilised people, convincing them that both the ‘faith’ and the community of Muslims are in danger and the only way to protect both is to fight for the caliphate. ISIS, by declaring itself as the caliphate tries to re-connect itself with the past. It also tried to win the hearts of the Muslim people who eagerly yearned for an Islamic state after the dissolution of the Ottoman Empire. Author writes, “ISIS drew …youth to its fold through deadly mix of religious puritanism, sectarianism and promise to build a modern caliphate, which it advertised as an alternative to the nation states the Muslims are now living in.” Because of its such a large influence seen through its global reach of its ideology and large base of foreign fighters, even after repeated attempts by the western powers to suppress and contain ISIS, it more likely to stay powerful for some time in the international realm.

“The book weaves different histories and prediction of the future of the region beautifully and presents a complete fabric of the politics of Middle East which was hitherto visible only as patches here and there.”

The writer, a defence policy researcher, holds a Masters in International Studies and Diplomacy from SOAS, University of London. She can be reached on twitter @connectwidtessa