Despite the growing risk factors of drowning prevalent in India and increasing threat, little empirical data is available to provide evidence for formulating measures. 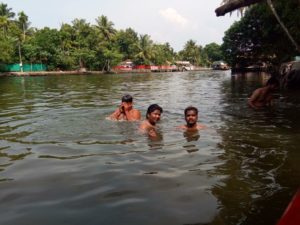 man in his mid 30’s died due to drowning as he went for fishing in Palar river in Vellore region of Tamil Nadu. Witnesses recalled that he was under the influence of alcohol and high currents due to arrival of monsoon in the region added to the woes. He is survived by his wife and two kids. The media coverage of drowning deaths is a common sight in India. Thus, it comes as no surprise that drowning accounts for 8.9 per cent accidental deaths in the country and is the second largest cause only after road accidents. But even after thousands die every year due to drowning, it is still not considered a health concern in public consciousness and remains unchecked by authorities.

WHO in its latest report on drowning reported that 3,72,000 people die every year worldwide due to drowning. 90 per cent of these deaths takes place in LMIC’s (Low and middle income countries). It is a major contributor towards mortality rates in south east asia. Another WHO report states that one person drowns every 8 minute in India, making it an important cause of mortality in the country. With the coastline covering 7516.6 km, a large proportion of people are constantly in contact with water for livelihood, transportation or agricultural activities. Water bodies are an integral part of communities mostly in rural parts of country. Increase in the number of natural disasters like floods and cyclones, especially in north eastern region of country, have also contributed to the number of fatalities. The most affected states in India are Madhya Pradesh, Maharashtra, Karnataka, Tamil Nadu according to the latest NCRB report in 2015.

Gender is an important factor in drowning cases as males are more prone to it as compared to females. Major reason for this is their exposure to water and riskier behaviour. The NCRB data shows the proportion of male deaths is almost double of female deaths in the cases of drowning. Another important factor which cannot be ignored is age as drowning is a leading cause of death among children of age group 0-5 years. Most of these incidents takes place in rural parts.

As Dr Jagnoor Jagnoor (Head, Injury Division,The George Institute for Global Health, India) said “Drowning is the leading cause of death in children aged 2-5 years in the region. What it means from public health perspective is that we are reducing under 5 mortality with good immunization coverage, but losing children to drowning in this population.”

High rate of child mortality due to drowning is because of reasons like lack of supervision by parents who are mostly out working, easy proximity to ponds and other water bodies in areas, lack of proper swimming techniques as most of them learn it from older children in villages. Large number of drowning related deaths are related to water based transportation as well as natural disasters. Use of unsafe vessels for transportation without the availability of safety equipments can be still seen in many regions. Those who stay in areas which are prone to cyclones, flash floods and storms are at higher risk. Living near sea, rivers and other such water bodies is also considered major risk.

Another surprising cause that has come up in recent years is the accidental deaths due to selfies. In 2015-16, newspapers were filled with reports of people dying while clicking selfies near water bodies or while participating in any water sport. In the light of this, many places even came up with warning signs asking tourists not to click selfies near water bodies.Many deaths also happens because of lack of knowledge of resuscitation process among common masses. An organisation working towards this cause in India is Rashtriya Life saving Society which is the official indian representative of Royal Life Saving Society (Commonwealth) based in UK.

Mrs Kavita Sharma, Vice President of RLSSI, recalls “while travelling in July 1997 we witnessed an accident where a school bus drowned as it plunged in river under Wazirabad bridge. Most of the kids died because of late first aid and no one present around knew about the life saving techniques.”

It prompted them to start this organisation and teach people the life saving skills required through various programmes in operational safety, first aid and resuscitation. She mentioned about a programme called – Swim and Survive which was conducted in schools of Kerala from 2010-2015 under which children were trained in community based setting. The programme expanded from 2-3 districts to 11 districts in the time period of 5 years and showed great results. Apart from the general public, they also train disaster management teams in like NDRF & SDRF.

Despite the growing risk factors of drowning prevalent in India and increasing threat, little empirical data is available to provide evidence for formulating measures. None of the national level health data sources collects data for mortality and morbidity rates occurring because of drowning. The NCRB report which provided data on morbidity and mortality rates due to drowning includes incidents of boat capsize, incidental falls in water bodies and other causes( which remains unexplained). Already available resources are often biased and provide contrary data as even pointed out by Dr Jagnoor because drowning cases are mostly under reported.

Drowning figures are often based on guesstimate on the basis of reported cases or picked up by media. Deaths which occurs in local communities often go unreported and very few kids are taken for medical assistance. Neither much of them are taken into consideration for police investigation in cases of not fatal incidents because of lack of legal implications.

The situation in our neighbouring countries are similarly alarming. A five-country community survey in Bangladesh, China, Philippines, Thailand and Vietnam in 2008 revealed an average rate of drowning deaths at 30 per 100 000 children under the age of 18 years. Among these countries Bangladesh has the highest number of such cases every year (16 570 cases). In Thailand 2,645 children die due to drowning each year.

Thus, the issue of drowning needs a policy intervention among all south east asian countries to map out preventive measures to be taken. Mortality due to drowning has both social and economic implications. We lose our future generation to a non fatal threat which can easily be dealt with proper interventions and family income of deceased also gets affected as these victims belong to age group of 0-15 years. More empirical based research needs to be conducted to understand the gravity of the issue and provide a clear picture. A positive step was taken in this direction, as in February 2018, Madras HC  directed the Tamil Nadu government to submit a report about measures to be taken to prevent accidental deaths by drowning in water bodies.

The author is a Master’s student pursuing Public Policy at St. Xavier’s, Mumbai. She can be reached on twitter @pragya_dhaka

Book Review: Is ISIS Caliphate coming to the doorsteps of India?