The industry today is one of the most dangerous in the world, taking hundreds of lives each year and causing severe damage to the environment.

India recycled 24.93 per cent of all ships recycled worldwide in 2018, according to the United Nations Conference on Trade and Development (UNCTAD). 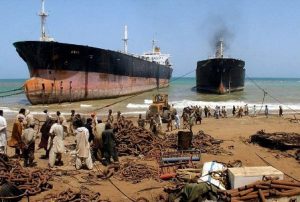 Intending to control at least 60 per cent of the trade over the next few years and double the industry’s contribution to its GDP, India passed the ‘The Recycling of Ships Act, 2019’ and has ratified the Hong Kong Convention in late 2019. In this context, it is relevant to take a closer look at the ship recycling industry.

As one of the oldest modes of transport, maritime transport is the backbone of international trade and the global economy. Over 80 per cent of global trade by volume and over 70 per cent by value are carried out by sea and handled by ports worldwide. The average service life of a ship is around 30 years, post which the costs of its repair and upkeep make it unprofitable. Thus, for a ship-owner, the final source of revenue from a ship is the value of its scrap metal, extracted through the process of ship-recycling.

Over the years, the shipping industry has evolved alongside developments in maritime trade as well as the shipbuilding industry. When ships were made of wood, they would be burnt or sunk. Today, ships are broken down in dry-docks or on beaches where they run into shore at full speed and are broken apart bit by bit on the shore itself. However, like every other industry, the ship recycling industry has several layers due to the number of stakeholders and the unique needs and interests of each party. Most often, a ship destined to be recycled is sold to a broker, who then sells it to a yard.

During this process, the nationality and name of the ship are often changed to evade specific legislation or taxes, so that it disappears from records and ensures that the reputation of the brand that first owned the ship is not tarnished.

About 73 per cent of the world’s fleet is flagged in a country other than the vessel’s beneficial owner. This is understood as ‘Flags of Convenience’. Key discrepancies exist between the states in which shipowners are based, and the flag states that exercise control over the world fleet. These flags are often changed through a process of “flag hopping” to reduce costs and avoid legal limitations. For instance, the ship ‘Oriental Nicety’ which was dismantled in Alang in 2012, was originally called ‘Exxon Valdez’. In 1989, after running aground in Alaska and leading to one of the largest oil spills in history, the ship was renamed ‘Exxon Mediterranean’. It was then sold to a new owner and renamed ‘Sea River Mediterranean’, which was later shortened to ‘S/R Mediterranean’ and then ‘Mediterranean’. When sold to another company, it was renamed the ‘Dong Fang Ocean’, and finally, when sold to be broken, it was renamed ‘Oriental Nicety’.

Most of the recycling within the industry takes place in South Asian countries like India, Bangladesh, Pakistan and China. While India has several ship-breaking yards in West Bengal, Kerala and Maharashtra, Alang-Sosiya in Gujarat is the most prominent. Often called the ship-breaking capital of the world, it is the largest breaking yard in the world in terms of actual numbers of ships broken.

The reasons for the dominance of India and other South Asian countries in the industry include favourable natural and geographical conditions, cheap labour, lax regulatory frameworks and demand for steel.

Currently, the biggest reason for the growth of this industry is the impact of the novel coronavirus. Due to measures taken to prevent the spread of the virus, the world economy is entering into a global slowdown or recession. One of the few industries that saw growth during the last global economic downturn, the ship recycling industry is looking forward to an increase in the number of ships that it receives in the next few years. For instance, in the years following the financial slowdown of 2008, the number of ships dismantled at Alang saw a steep growth. Presently, the global shipping sector has already begun to feel the impact of the COVID-19 pandemic, especially due to the reduced demand for oil, goods and exports. Such slowdowns in global trade coerce fleet owners to retire their ships faster.

As highlighted previously, the importance of the industry can be gauged by the employment, scrap steel and revenue it generates. The industry at Alang-Sosiya itself provides employment to more than 20,000 workers directly and around 3 lakh people indirectly. Additionally, the Government of Gujarat, as well as the Central Government, receive significant revenue from taxation and customs. In 2014, it was estimated that the industry provided INR 70 crore in revenue to the Gujarat Maritime Board each year. It is also argued that the ship recycling industry is sustainable, as most of the ship – steel, parts and even furniture – can be recycled and turned into new goods, or also used as it is. The steel from a ship is often made into steel bars and rods, reducing the dependence on imported steel and even furniture and other fixtures are resold. 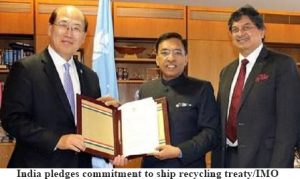 The industry today is one of the most dangerous in the world, taking hundreds of lives each year and causing severe damage to the environment. A Supreme Court-appointed technical committee found that the accident rate in the ship recycling industry was several times higher than the mining industry, famously called the most dangerous industry in the world. The average annual incidence of fatal accidents in the ship-breaking industry is 2.0 per 1000 workers, while the all India incidence of fatal accidents during the same period in the mining industry, which is considered to be the most accident-prone industry, is 0.34 per 1000 workers. Workers in the industry rarely get access to protective equipment, and due to the nature of dismantling – the gravity method—they risk heavy pieces of steel falling on them, or poisoning by the toxic materials handled during the process. Even if not direct, the presence of material like asbestos heavily impacts the lives of workers, and in extension, their families. A study, conducted between 2006—07,by the National Institute of Occupational Health, Gujarat, which carried out X-rays of 94 workers, found 15 workers suffering from very early stages of asbestos poisoning.

The environmental impacts of the industry are also extensive. Toxins are directly let into the sea, air and soil without any filtration, impacting the lives of the villages of Alang-Sosiya, especially since they are heavily dependent on fishing and farming. The quality and quantity of fish available have reduced, and the fish that is available is no longer commercially viable due to their natural mutation to adapt to the new environment. The soil has heavily degraded in quality, making it tough to grow crops, and there is a looming issue of water scarcity. Villagers have also complained about the noise pollution.

At the same time, it is a necessary evil, considering the current dependence on maritime transport and the need for end-of-life management, as well as the employment that it generates. It is simultaneously termed as one of the most sustainable industries in the world, considering that each part of the ship can be recycled. The industry is central in the debates around waste-flows, and the responsibility that each country has towards managing its waste. However, it becomes crucial to ask if these short-term economic gains can justify the long-term environmental and ethical impacts of the industry. As the industry looks forward to an increase in the ships being broken, growing consciousness around environmental and ethical issues, especially in the COVID-19 world, must be engaged with.

(This article is based on the SPRF policy brief )

The writer is the Digital Media and Communications Manager at the Social and Political Research Foundation (SPRF). She is a graduate of Political Science from the University of Delhi with an interest in International Relations and Security Studies. She can be reached on twitter @SitsSrin.