C.V. Raman and the Press

When C.V. Raman was 18 years old, he published his classroom experiment in a British journal Philosophical Magazine.

Renowned Indian Scientist Sir C.V. Raman maintained unique relations with media. It was this relationship with media that helped Raman to bring out his pathbreaking discoveries to the attention of the global scientific community, ultimately winning him the Nobel Prize. A new book on Raman’s interactions with media has revealed this.

The book- ‘C.V. Raman and the Press: Science Reporting and Image Building: Part I – Kolkata Period’- has been written by Dr. Rajinder Singh, a well-known historian of science. The book succinctly captures Raman’s interaction with media in India and abroad. The volume deals with Raman’s lifetime in Kolkata between 1907 and 1933. The second part will be devoted to his lifetime in Bangalore.

Raman was a genius in science, a gifted speaker, a reputed teacher and a prolific writer. The book sensitively portrays how he used the power of media for the acceptance and recognition of his discovery.

At a very young age, Raman observed the diffraction of light through an oblique rectangular apparatus. His curiosity led him to develop a mathematical equation to explain his observations. When he was 18 years old, he published his classroom experiment in a British journal “Philosophical Magazine”. From 1907 to 1922, he worked extensively on acoustics; he made valuable contributions to the science behind musical instruments such as violin family (comprising stringed instruments) and mridangam (percussion instrument).

Also Read : No Evidence Of Rift Between Einstein And Bose New Book

He studied the whispering effects under the domes of “The Victoria Memorial, Calcutta”, “The GolGumbaj” at Bijapur, “The Granary” at Patna, and “St. Paul’s Cathedral” in London. All his observations were published in “The Modern Review”, “The Hindu”, “Proceedings of Royal Society of London”, etc. Thanks to his rich family background in academics, he learnt quite early in life the fact that for one’s research to be widely circulated and accepted, it should be published in reputed foreign journals.

Raman did not sit in his office and waited for journalists to approach him, instead he reached out to them with press reports for publication.

Raman worked at the Indian Association for the Cultivation of Science (IACS), where he conducted several studies and published many research papers in renowned European journals. On the basis of his work, he was offered the prestigious ‘Palit Professor of Physics Chair’ in the University College of Science and Technology in 1914. He was given complete freedom to do research work at the IACS and the University of Calcutta. 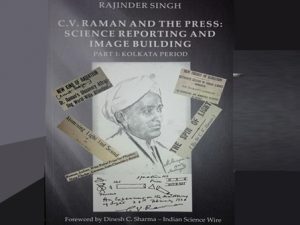 When he made the discovery of “Raman scattering” or simple the “Raman effect”, the University of Calcutta came forward and provided full support to him in 1929. He was also given a grant to visit Europe to explain his discovery to the world. His findings were received with great enthusiasm and about 70 papers were published in reputed Western journals on “Raman effect”, “Raman lines” and “Raman spectra” within a few months.

Raman received various awards including the Knighthood by the British Empire in 1929. He met eminent scientists Sir Ernest Rutherford and Paul A M Dirac. Sir Ernest Rutherford, along with CTR Wilson, later nominated Raman for Nobel Prize.From France, E Bloch, J Perrin and de Broglie brothers nominated Raman for the Nobel Prize for the year 1930. He made contact in person with almost all prominent scientists to mobilize their mindset to nominate him for the Nobel Prize.

The book chronicles a detailed account of his return to India, and how grandly he was welcomed at Howrah by professors, students, public and the Deputy Mayor of Calcutta.

Lady Raman gave interviews to local press detailing their interaction with important personalities and institutions abroad. In Calcutta, many lectures and ceremonies were organized and “The Calcutta Municipal gazette- Raman Number”, was published on July 4, 1931 to mark his achievement.

Raman had developed a heroic image for himself. Once Prof. S. Radhakrishnan, while greeting Raman, wished and remarked that “Raman would be able to leave behind a batch of students who would be Nobel Prize winners”. Today we all know that Raman could not fulfill his wish.

Raman spent 25 years in Calcutta, the most formative years of his life. He was loved and respected by all. Later, Raman took up an offer from the Indian Institute of Science, Bangalore, for Directorship and served the Institute for 15 years.

The book featuresclassic collection of over 77 rare press clippings related to Raman and his achievements. Dr. Rajinder Singh, who has authored over 27 books,has conducted painstaking research and the present volume is his fourth book on the life and work of Sir C. V. Raman. (India Science Wire)

NBRC scientists pave the way for a better understanding of Autism