Once Canakkale 1915 is in place, the travel time will be reduced to a short drive of just 10 minutes, which currently requires a 30-minute ferry ride also.

As a tribute to mark 100 years of the modern Turkish Republic and in a bid to transform the country, the Government of Turkey has undertaken an ambitious infrastructure investment programme with new mega tunnels and bridges. 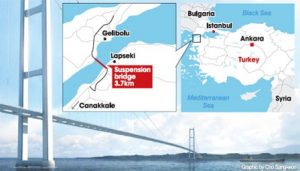 The Canakkale 1915 bridge is one such project, which is a steel-built infrastructure, spanning the Dardanelles Strait that separates two continents – Europe and Asia. Dardanelles Strait is a narrow, natural strait and internationally significant waterway in north-western Turkey. One of the world’s narrowest straits used for international navigation, the Dardanelles connects the Sea of Marmara with the Aegean and Mediterranean Seas, while also allowing passage to the Black Sea by extension via the Bosphorus, which is an important shipping route.

Turkey’s General Directorate of Highways (KGM) has awarded the 1915 Çanakkale Bridge and Motorway Project within the framework of a Public Private Partnership (PPP) model to a Turkish–Korean consortium, which in turn established a company, Çanakkale Motorway Bridge Construction Investment Management Inc., specific to the prestigious project. Canakkale 1915 is a suspension bridge being constructed in the north-west Turkish province of Canakkale and will service the 320 km-long Kınalı-Tekirdağ-Çanakkale-Balıkesir motorway. The bridge will connect the Anatolian peninsula and East Thrace. Once Canakkale 1915 is in place, the travel time will be reduced to a short drive of just 10 minutes, which currently requires a 30-minute ferry ride also. This record-breaking steel-built Canakkale 1915, being built at an investment of USD 3 bn, is scheduled to open in 2023, and it will be a towering achievement for the country.

The Canakkale 1915 is set to become the world’s longest suspension bridge, as the span between the two towers sits at 2023 metres.

It will outstrip Japan’s Akashi Kaikyō bridge by 32 metres. According to the structural engineers, of the project, the full length, including the approach viaducts, of the bridge will stretch to 4608 metres.Moreover, the Canakkale bridge will have seen 128,000 tonnes of steel deployed in its construction upon completion. Further, formed of a reinforced concrete deck, the bridge structure supporting the road surface will be underpinned by a pair of shear-connected longitudinal steel box beams, interconnected by steel crossbeams that sit on external cantilevers.The 45-metre wide deck will have the capacity to handle large volume of commercial and private traffic.The bridge will have three lanes moving in both directions apart from walkways on either side for maintenance. 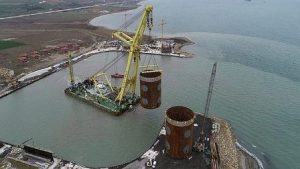 The towers, which sit on a pair of steel platforms each mounted just above sea level on massive 65,000-tonne submerged caissons, will make the Canakkale bridge the fourth tallest in the world, with its unique and striking design stretching 318 metres into the sky. The ambitious bridge project is a great partnership in steel, as the steel elements of the bridge represent a strategic partnership between Turkish and South Korean suppliers.As per the partnership terms, Turkey’s Çimtaş steel and POSCO have agreed to supply 35,000 tonnes of heavy steel plate for the tower structures, cabling systems and road surface. Apart from this arrangement, the partnership is also supplying 52,000 tonnes of steel plate for the bridge deck and 41,000 tonnes of steel wire rods for the suspension system for the bridge.

Another unique feature in terms of construction of the bridge is it being run as a ‘design-build’ project.

While the design is completed before contractors and suppliers are selected in normal bridge and infrastructure projects, for this project, however, construction and design take place concurrently, requiring coordination between the architect and contractors from the beginning itself.

Steel is extensively involved in almost any large-scale infrastructure project in this century. It is utilised globally in the construction of large and small bridges to tunnels, airports, railway stations, bus stations and car parks. Steel is a versatile and durable material that provides efficient and sustainable solutions for timely completion of projects, and addressing unique engineering challenges of our times.

The writer, Project Lead, Bellwether Infratech and Housing, is based in Kochi, Kerala.