Researchers estimated that the impacts of the notorious change in climate would affect 250 million people living within the coastline area of the country.

In a recently published study in the journal Nature Scientific Reports, it is estimated that there would be a decline of 35% in work performance in the east coast region of India by 2100 due to heat stress caused by extreme heat and humidity. This would be extended to most of the other regions of the country due to increasing anthropogenic greenhouse gas concentrations and other climate change related factors.

The research published in Nature Scientific Reports, December 2020 says that excessive heat stress increases core human body temperature rapidly with damaging effects on the brain and other vital organs that lead to a decline in the physical work capacity of the workers. Heat stress is manifested by a range of health conditions like milder heat rash and heat cramps to heat exhaustion. These are linked to occupational health hazards depending on the nature of work that adversely affects productivity.

There are studies reporting heat stress where only temperature data are taken into consideration without considering the effects of humidity.

The present study has however included humidity also as a key factor responsible for human discomfort and therefore integrated it into the research model to arrive at the heat stress index data.

“As the duration and intensity of hot days will increase in future, while assessing the severity of the situation in the two coastal regions of India (east and west coast), heat stress index over India needs utmost attention to analyze to arrive at conclusions on the future changes and their effect on productivity of the work force,” said researchers K. Koteswara Rao, Indian Institute of Tropical Meteorology, Pune and T.V. Lakshmi Kumar, Atmospheric Science Research Laboratory, SRM Institute of Science and Technology, Tamil Nadia, India.

Researchers estimated that the impacts of the notorious change in climate would affect 250 million people living within the coastline area of the country. This is posing a big threat to the livelihood of the coastal communities due to the decline in their work performance as a result of the harsh environment.

Researchers, therefore, suggested the policymakers to take actions for the protection of the workers from heat stress by preventing exposure to extreme heat in a working environment and reduce illnesses caused by heat stress. This would help to sustain work performance by limiting health hazards.The result of the research showed that compared to the west coast, the east coast would be prone to more heat stress by 2100. Scientists observed a significant rise in the maximum temperature on both west and east coast with a diurnal temperature range of 1-2 degrees C for the periods 1951 to 2010, which might contribute to the higher loads of heat stress over these areas. 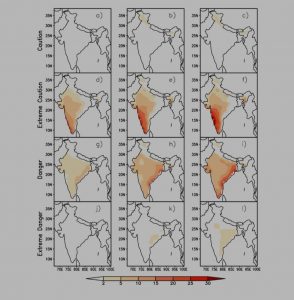 The study tried to correlate how the combined extremes of heat and humidity work in warming the Earth. The researchers used 1986 to 2005 as the baseline period during the summertime for arriving at statistical conclusions on rare events for three time slices extending from 2016-2035, 2046-2065 and 2080-2099 under different emission scenarios. The study projected heat stress by focusing on heat extremes, Projected changes in four categories of summertime heat stress days (%) under MEDIUM emission scenario (RCP4.5) for the three time epochs of 2016–2035 (left column), 2046–2065 (middle column) and 2080–2099 (right column) with respect to 1986–2005

humidity and infrared radiation etc. which are associated with the decline in work performance over India in the present and future climate.

The research authors claimed that their work would facilitate policymakers to design better policy tools for taking necessary steps for the welfare of the working people and to protect them from increased heat stress under changing climate conditions.