Women should be recognised as equal and an important aspect of agricultural farmer community. This behavioural change will reduce gender gap in agriculture. 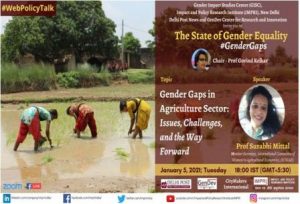 contributed to employment loss for women. Shift in economic activity has been observed as more women are engaging in the manufacturing and service sectors. This shift is evident in the World Development Indicators by the World Bank, which shows the percentage of male and female employment both have declined in agricultural sector between 2000 and 2018,whereas in the services and industry sector it has increased”, said Prof Surabhi Mittal, Member Secretary, International Committee of Women in Agriculture Economics (ICWAE). This shift is termed as development path and is a characteristic of all the countries across the globe.

Prof Mittal was speaking at the webinar “Gender Gaps in Agriculture Sector- Issues, Challenges, and the Way Forward”, organised by Gender Impact Studies Center (GISC) in participation with the Delhi Post, Gendev Center for Research and Innovation, Gurugram and CityMakers International at Impact and Policy Research Institute (IMPRI), New Delhi.

The labour market is challenged with wage gap which is commonly found in all the spheres of economic activities ranging from agriculture to non-agriculture.Women are paid less than their counterparts for the same amount of work. Prof Mittal highlighted that this gap is much wider in non-farm sector.

Moreover, 60-80 per cent of the total food production is being done by rural women. The myth does not recognise the women’s contribution to agriculture.

While explaining her research study on the role of women in wheat production in three states, which are the major producers of wheat in India, Prof Mittal observed that in Haryana and Madhya Pradesh both the genders devote almost equal hours of the day to produce wheat. In Bihar, females devote more hours per day than men. The females are involved in economic activities of cropping system, but their role is negligible in household decision making and participation, irrespective of gender of head of household. This exclusion will have a bleak outcome.

Women in agriculture lack in three major areas including technical know-how, the context of cropping and access to the markets, which cause a major gender gap in incomes and the agriculture productivity of women. This stemsto another myth- since women are excluded from decision-making, thus, they do not require any technical information to work efficiently.

Information gap in terms of literacy, limited access to assets, and cultural barriers and traditional mind-set is additional challenge for women which create a paradoxical cycle. Barring women in decision making process denies them technical know-how and knowledge which further excludes them from decision making.While narrating her field experience conducted in 2012-15, Prof Mittal discovered that women not only listen to the agriculture information delivered to them over mobile phones but they put it into practice. They are keen to get information and swift to apply. Bridging the information gap among the females will empower women-headed households which will further help women to put the information into practice. Consequently, their role in decision-making increase.

Technology is gender neutral is another myth as new technology may increase yield and thus incomes, consequently, impacting women’s livelihoods. Use of technology is perceived differently by men and women. Women, having small land holdings, deprived of technical know-how and do not have enough income to hire labour to operate machines would always find difficult to adapt to modern technologies. Technology has created a bias where women are largely involved in manual works indicating mechanisation will land women more jobs that towards drudgery. It is true that Labour-saving technologies (LST’s) will reduce the burden of work, but gender lens of these technologies is important.

National agricultural data sources do not provide information which can help us to understand the extent of gender gap, thus indicating data challenge in agriculture. Agriculture lacks activity-wise time use data. The data showing access to food in terms of availability and affordability disaggregated by sex does not exist which is inefficacious in identifying gender gaps.

Prof Mittal advised to empower women with better ownership of resources, tools, technologies, spreading information to create awareness and involvement in decision-making process within agriculture. This would generate significant gains for the agricultural sector and society. Food and Agriculture Organisation (FAO) estimates that if women had the same access to productive resources as men then there will be: a) Increase in the yields on their farms by 20–30 per cent; b) Rise in the total agricultural output in the developing countries by 2.5-4 per cent; and c) Reduction in the number of hungry people in the world by12-17 per cent.

Women should be recognised as equal and an important aspect of agricultural farmer community. This behavioural change will reduce gender gap in agriculture.

Ms Pankhuri Dutt, Public Policy Consultant at NITI Aayog, said that there is a need to look at the other 80 per cent of the women who are not engaged in agriculture and the reasons thereof. Unavailability of data at macro level impedes decision-making and policy making.

COVID-19: Central Schemes Failed in Their Promise to Poor and Marginalised